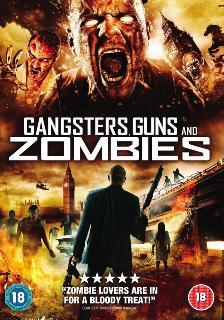 It’s not a promising title, is it? The world is awash with zombie films and whatever the first geezer gangster film after Lock Stock was, at that point there were already too many gangster films in the world. In fact, the idea for this film came to Matt Mitchell after he heard somebody else specifically praising a movie for not having “gangsters, guns or zombies”. Nevertheless, this turns out to be a terrific horror film, a very funny comedy and not at all annoying in the way most geezer gangster pictures are.

One reason for that is that these guys aren’t rally ‘gangsters’ per se, just bank robbers making their escape from a successful heist with a bag of cash. Vincent Jerome (The Third Testament: The Antichrist and the Harlot) as ‘Q’ is our nominal hero, driving the van on his first job. Huggy Leaver (Gun of the Black Sun) is the boss, an experienced bank robber named Tony. Muscles (Charlie Rawes, who looks like the Hulk and sounds like Arthur Mullard) provides the muscle; Pat (the wonderfully lugubrious Frank Rizzo: Doghouse) has seen it all before; Crazy Steve (Fabrizio Santino: A Day of Violence) is unpredictable; and Tony’s nephew Danny (Simon Mathews: Three’s a Shroud, Exorcism) is badly injured.

The problem this gang face is that, in trying to make their getaway, they are having to drive straight through a zombie apocalypse. While that has some benefits, such as keeping the rozzers busy, it’s also bloody inconvenient. And it is this resigned irritation which gives the film its unique approach to the genre - and much of its comedy. In a standard zombie film, people are either terrified or bravely fighting back. But Tony and his team are just really, really annoyed, occasionally winding the Transit window down to blast the undead at close range with a cry of “Fack off, you muppet!” 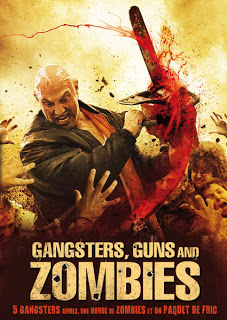 The first act sets up these interesting, well-rounded characters while providing enjoyable glimpses of the apocalypse as the white van drives past undead and soon-to-be-dead. The clown, the wedding party - and especially the Medieval re-enactors - provide hilarious tableaux that would never be enough for a film (or even, in most cases, a scene) but frame our protagonists’ story brilliantly.

After an ill-advised and unsuccessful stop at a deserted petrol station, the gang eventually find themselves at a converted windmill where they meet no-nonsense Cassie (Cassandra Orhan) and her even-less-nonsense grandma (Jennie Lathan: The Stomach). This allows for a more sedentary second act as the boys and girls square off against each other, then work together, while tensions simmer among the bank-robbers and a nicely handled Cassie/Q romance starts brewing. And the third act sees a break for the seaside and (hopefully) safety.

I know it’s a cliché to compare every British horror comedy to Shaun of the Dead, but actually GGZ manages something which Shaun excelled at but which many other films fail (or avoid) - and that is a good balance of comedy and horror, rather than the dangerous chimera which is comedy-horror. As with Shaun, characters we care about will die and the zombies are never less than a deadly threat. But the comedy is spot-on and laugh-out-loud funny, coming from characters and situations rather than over-the-top gags.

GGZ was the ‘mystery film’ at the 2012 Day of the Undead zombie festival in Leicester and went down an absolute storm. Remarkably it turns out to be local; despite being set in the home counties, everything (except the seaside finale) was shot in Rutland.

Director Matt Mitchell previously made shorts about zombies (Don’t Lose Your Heart) and gangsters (Fuhgeddaboudit!), and here combines the two. I only realised when writing this review that he is the same Matt Mitchell for whom I wrote an unproduced project called The Villa a couple of years ago. Matt co-wrote the GGZ script with his wife Taliesyn who also gets an assistant producer credit. 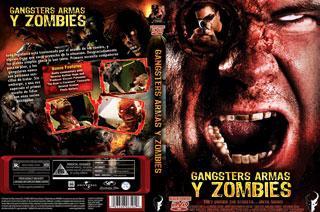 Josh Myers, who appears briefly in a flashback as a mate of Q, was in Zombie Diaries 2 and Psychosis. Cinematographer Jamie Burr (camera op on Tied in Blood) does great work, shooting mostly in daylight but conveying real tension and fear. Special effects were handled by Doug McCarthy (Lighthouse, assorted Harry Potters) and visual effects by Stuart Cohen.

Gangsters, Guns and Zombies was released on DVD in October 2012 - in France. At time of writing (December 2012) it’s out in the States but there’s no British release planned until early next year (in a sleeve which, despite the film not being set anywhere near central London, features Big Ben not once but twice!). When you can get your hands on it - grab a copy. Great fun and a clever, original twist on two much-abused genres.