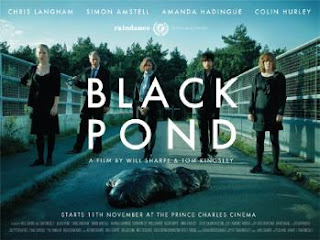 This will probably be one of my shorter reviews, partly because I enjoyed Black Pond so there’s little to criticise, partly because the film is a lightweight, enjoyable indie black comedy and I don’t watch many of them so I don’t know quite what to compare it to.

It’s one of those films where not much happens but what does happen is a bit odd and it happens to a group of people, some of whom are also slightly odd. And it stars Chris Langham, whom I’ve always thought a very funny performer, but who has been, for reasons we don’t need to go into here, out of the limelight in recent years.

In Black Pond he’s Tom Thompson, a retired something who lives in a home counties village with his wife Katie (Anna O’Grady) and a three-legged dog called Boy. Their daughters Jess (Helen Cripps) and Sophie (Amanda Hadingue) have left home but not yet settled down. Life for Tom and Katie is prosaically upper middle class. 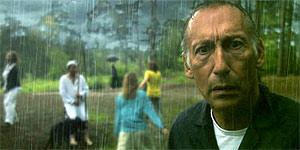 Then into their life comes Blake: an impressively complex yet disarmingly simple performance from Colin Hurley. Tom meets Blake one day when out looking for Boy and gets chatting. Blake is just slightly off-kilter, perhaps he’s autistic. He’s friendly and polite but a bit too much so. His concept of personal space isn’t quite the same as everyone else’s.

Katie and especially Tom have upper middle class characteristics: repression, uncertainty, discomfort, and an ineffable politeness which does its best to mask their repression, uncertainty and discomfort. Blake has none of that, but he’s not some sort of wild free spirit, he’s just open and honest. Or is he? Gradually he becomes part of the Thompson household, not in an insidious way but because Tom and Katie are too polite to ask him to leave and he doesn’t realise that the situation might be uncomfortable.

Jess and Sophie are surprised to meet Blake when they come home to comfort their parents after Boy dies in an accident. With them is their friend Tim Tanaka (co-director, co-writer Will Sharpe) who isn’t either girl’s boyfriend but has a secret crush on both and is regarded by Katie and Tom almost as a son. It is in the wake of Boy’s death that Blake also, somehow passes away.

The film’s main narrative is a protracted flashback to these events, intercut with to-camera interviews by the characters discussing what happened and the subsequent scandal when they were, as a family, accused of murder. This is why it’s okay for me to tell you that Blake dies near the end: the film starts with discussion of this event. 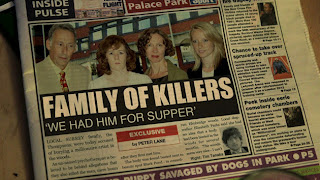 Woven in with this is a curious B-plot about Tim visiting a psychiatrist called Eric Sacks (presumably named after Oliver Sacks, author of The Man Who Mistook his Wife for a Hat). Sacks is played, incongruously but not unsuccessfully, by Simon Amstell off Never Mind the Buzzcocks who has somehow won two British Comedy Awards (the few post-Lamarr Buzzcocks I’ve caught have been awful but somebody must still be watching it and it’s not entirely Amstell’s fault).

Sacks acts bizarrely, harangues Tim and may in fact not be a qualified psychiatrist at all. It’s not clear why Tim is seeing him nor is it entirely clear when these scenes take place in relation to the rest of the story. There’s a brief scene later on where Sacks recognises Tom in the street but other than that there’s no pay-off to this strand of the plot.

I enjoyed Black Pond, don’t get me wrong, but it doesn’t go anywhere or do anything. It’s a harmless enough little film but it relies almost entirely on Langham and the non sequitur of the Tom/Blake relationship for its entertainment value. Also worth noting is that this is only a ‘black comedy’ in the sense that there is an air of wry character-based humour and two characters (with an unusual total of five legs) die. But there is nothing controversial or taboo here.

Gentle: yes, sort of. Quirky: yes, in a rather ambivalent sort of way. But it eventually dawned on me that the reason I’ve found it so hard to get a grip on this film and find an angle for this review is because Black Pond falls down in one crucial area. It’s not in any way thought-provoking. I liked it, but it didn’t make me think. And I was expecting it to make me think. In fact, it only really prompted three thoughts in my head: 1. It’s good to see Chris Langham back on screen. 2. Simon Amstell is still irritating but at least he’s not surrounded by unfunny comedians and pop stars I’ve never heard of. 3. Why has Will Sharpe’s character got a Japanese name? 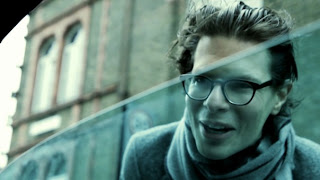 Sharpe looks slightly more Japanese than I do, but not much. Maybe he has a Japanese grandparent or something. He and his writing/directing partner Tom Kingsley are both mid-twenties and ex-Footlights; Kingsley directs music videos (for pop stars I’ve never heard of) and Sharpe has acted in Casualty, Sherlock and - dear God, why does this programme keep popping up in my writing - the officially recognised least funny comedy series ever, The Wrong Door.

The two previously collaborated on Cockroach, a half-hour short set and shot in Japan. This is online and I’ve got to admit that I only made it through ten minutes before losing interest and doing something else so I can’t really judge it. Sorry, but if I wanted to watch nothing happening on my computer there are 15MB PDFs I can try and open.

I sound like a right old curmudgeon, don’t I? While I’m complaining, I should probably add the other problem I had with Black Pond which is that this is a very, very southern film, devoid of any recognisable elements for those of us who live north of Watford. The Thompson family are not presented as being super-rich - Tom merely explains how he enjoys the benefits of his tedious job - but they have a large house with a tennis court and an outdoor swimming pool. Almost anywhere outside the Home Counties they would be considered extraordinarily well off and this makes them difficult to empathise with. It’s the sort of incomprehensible, alien society that inflicts Richard Curtis films, but without Hugh Grant. There’s no hint of social realism here. 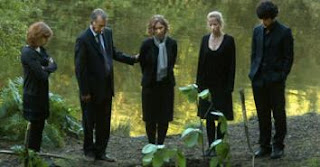 Does it sound like I’m floundering with this review? I am to some extent. If you like gentle, slightly odd indie comedies, you’ll love Black Pond. If you like Chris Langham (and can tolerate occasional short bursts of Simon Amstell) you’ll like Black Pond. But it’s a wisp of a film, with translucent characters whom we never truly get to know and a plot so lightweight that it has to be held down at the corners.