The Notebooks of Cornelius Crow 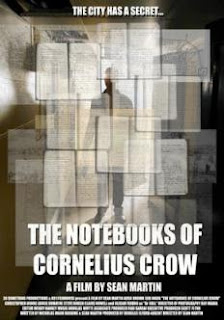 The Notebooks of Cornelius Crow was produced in 2003, played festivals in 2004/05 - then disappeared. In 2012 I noticed that director Sean Martin had made it available online through IMDB (and also through Amazon.com, which may be a better quality version since you have to pay for that while the IMDB version - which I watched - is free). According to Google, the film actually went up on the Italian, French and German versions of IMDB in 2010 so I’m considering that as the release year until I hear otherwise.

Anyway, the film is out there now and you can watch it. Which you should do because it’s quite good and interesting and original - so it’s a real shame that it apparently never had a DVD release (although one was planned, and a short montage of clips from a commissioned Making Of exists online).

Thematically, Notebooks fits comfortably into the ‘hidden London’ subgenre alongside Hadi Hajaig’s Puritan, Neil Gaiman’s Neverwhere and TV anthology Urban Gothic (although not London Voodoo, which is about Londoners and London society/community but not the actual built environment of the city itself). This is one of those films with maps of the city and the subtext that the whole thing has been built to a plan.

Sean Martin is something of an expert on this sort of historical oddness, having written books about Knights Templar, Gnostics and Alchemy (for Pocket Essentials, the same people I did my first Hitchhiker’s Guide book for). So in writing and directing Notebooks he knows of what he speaks. And he manages to shoehorn everything into about 80 minutes: Nicholas Hawksmoor, Egyptology, the Great Plague, the Great Fire of London, the Blitz and both Jacks: Spring-Heeled and The Ripper. Plus the difference between the Gregorian and Julian calendars is some sort of plot point. 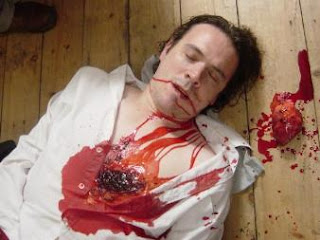 Adam Napier (who was in the Doctor Who episode ‘The Impossible Astronaut’) is good in the lead role of Jack Cade, an amiable everyman who read Philosophy at Cambridge and now vacillates between his local pub (The Saracen’s Head - a name mentioned/shown enough times that it must be significant) and his flat where his landlord (Simon Roberts: Hollow) is forever chasing last month’s rent.

Cade (who shares his name with the leader of an unsuccessful 15th century rebellion) has an old mate from uni, Billy Dodd (Matt Raper) who knows secrets and passes onto him a battered old notebook before being killed. This precipitates a whole bunch of curious characters into Cade’s life, including Saffron Hill (Siri Ingul, subsequently cast in a Norwegian soap opera), a homeless friend of Billy’s; Peter L’Enfant (Steve Dineen), a yuppie from uni days, now working for some sort of occult property developers (plus his power-suited lady boss Kathleen Durer: Louise Dumayne) and Cornelius Crow himself (Christopher Dunne: Lighthouse, 28 Days Later, Mutant Chronicles), who can apparently not only travel through time but bring it with him. Olegar Fedoro, sedately sinister as Jack the Ripper, previously starred as Rasputin in a 2002 TV movie.

The Notebooks of Cornelius Crow is packed with enigmatic, unexplained stuff - but in a good way. What are we to make of scenes set in a previously unnoticed, wood-panelled ‘other bar’ at the Saracen’s Head where the comely serving wench brings over ale in pewter tankards - yet is clearly wearing denim jeans? How significant is it that a 21st century incarnation of Ripper victim Mary Kelly is played by the same actress as the pub’s regular barmaid (Lauren Bigby: Asylum Night)? 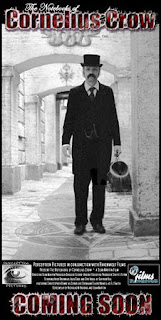 On top of all this, Martin throws in a gimmick of frequent sepia flash-montages of still photos, engravings or archive footage related to whatever is being discussed on screen (interspersed occasionally with flashbacks of earlier scenes). This could have been annoying but it is actually adroitly handled and really adds to the film’s distinctive feel. So kudos to editor Wendy Hankey aka Gwendolyn Garver (who subsequently married this film’s producer Douglas Elford-Argent).

The characters in this film are interesting and, within the fantasy milieu, believable - because they all have relationships to each other which define them. The plot, though complex, is intriguing and gripping. Solid acting across the cast (several of whom were in Sean Martin’s first feature Mystery Play and/or other Elford-Argent produced films) and nice camera-work by Scottish DP Ray Wadia (who is now a top photographer based in Florida) plus a decent score by Douglas Whyte (who is now a top West End musical director named Jennifer) all add up to a thoroughly enjoyable and intrinsically British movie.

An overlooked obscurity, The Notebooks of Cornelius Crow shows how clever, interesting, well-made films can slip through the cracks - but can still be tracked down by the diligent fan of new British horror.