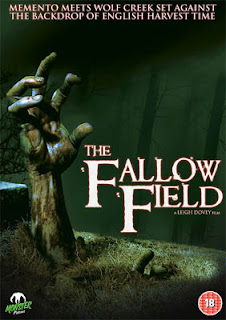 It’s always great to find something unexpected. Sometimes I watch a film that I’ve been looking forward to for months, even years. I may know the director, I may have been on set, I may have read the script. Then there are the ones that come out of the blue.

Jake West put me in contact with producer Colin Arnold in July 2009. A disc of The Fallow Field arrived shortly thereafter and a couple of months down the line it made its way to the top of the TBW pile and into my DVD player. I knew nothing at all about the film - which turns out to be one of the most original and unnerving indie horrors I have seen for a long time.

The Fallow Field starts with an ordinary chap, Matt Sadler (Steve Garry: The Butterfly Tattoo, A Stitch in Time, Enough Rope) waking up in the middle of nowhere and returning home. He’s been missing for a week and, as a police inspector (Angus Kennedy, a prolific TV actor who has been in everything from The Box of Delights to Nuzzle and Scratch!) observes - it’s not the first time. Matt’s wife (Anna Ruben, who was in two episodes of The X-Files) thinks he’s having an affair. As it happens, he is - with Anne (Sarah Pemberton, formerly of the Sitcom Trials stock company) - but that’s not where he’s been.

This is just an absolutely perfect hook. We cannot stop watching now - we need to find out the solution to this classically simple mystery. We know just enough about Matt to care about him but we haven’t wasted time with unnecessary set-up or waffle. Here’s the mystery - hang around and you’ll find out the solution. 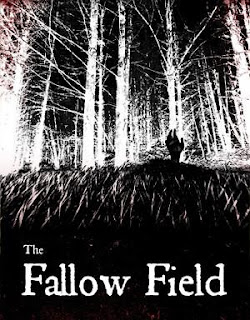 Driving around the country lanes, Matt gets a touch of deja vu at an isolated farm where he meets farmer Calham (Michael Dacre: Nuryan) - who I assumed was called ‘Callum’. Calham’s a large bloke, thinning of hair and unsettling without being unfriendly. He lives alone but there are a considerable number of child’s drawings in his kitchen. Something doesn’t quite add up.

The film’s website describes it as ‘Memento meets Wolf Creek’ and I can see what it means. It’s actually not like Memento except that amnesia is central to the plot, but I got a definite feel of Aussie psycho horror Wolf Creek from the moment that Calham appeared. The Fallow Field sits solidly in the subgenre of countryside horror. It’s the urbanite’s fear of the rural, a theme that may perhaps be traced back as far as The Wolf Man or The Old Dark House but which was really encapsulated by Straw Dogs. More recently, it was the core of Doghouse, a film widely misread as being about the male’s fear of the female.

But this isn’t just another you-ain’t-from-round-these-parts backwoods psycho tale. The Fallow Field is actually a supernatural horror with, at its heart, a beautiful premise of dark fantasy. This is a very English horror story, owing as much to EF Benson and MR James (or indeed, Simon Clark and Ramsey Campbell) as to any recent cult movie.

After that absolutely spot-on mystery opening, the film builds throughout its ‘first reel’, piling atmosphere and characterisation on top of each other. Then at 20 minutes, something happens which leaves us shocked and confused.

By the time we realise what has happened, it merely confirms the unlikely but unavoidable story that has been dancing around our heads as the only possible explanation, however fantastic. Unfortunately for Matt, by the time he discovers this, he is a prisoner of Calham, shackled and isolated. (Although we never return to his home life, the inference is that no-one will miss Matt because his wife and mistress are both used to his sudden disappearances.) 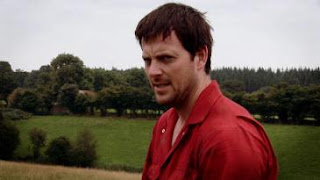 It’s very telling - and very shrewdly calculated - that the revelation of what happens to Matt during his disappearances isn’t the pay-off of the whole film but a gradual realisation, and subsequent exploration, throughout the second act. Then in the third act Matt attempts to escape with the aid of a second prisoner, Rob (Johnny Vivash: Kung Fu Flid).

Natalie Overs appears briefly as a female victim of Calham’s twisted games while Edwin Wright plays something nasty in the woodshed, under prosthetic make-up rendered all the more horrific by the fact that we never get a clear view of it. There’s a revelation around this deformed character which, truth be told, is pretty much obvious from the start (or at least, expected) but it’s not played as a great reveal so that doesn’t matter too much.

Describing more of the plot would be giving away too much of what is a very cleverly devised and genuinely creepy story. Running a full 94 minutes, the action never drags even though it’s often slow and atmospheric, especially in those early scenes of Matt trying to find a trigger for his memory. It is also unbearably tense at times and there is one moment, involving a knife through a hand, which will have you squirming - not because of any cruelty or sadism but just because of the context and the reason.

This isn’t a horror film based around violence, though it has its violent moments. This is a film based around the horror of a (fantastical) situation and the very real person who, through social isolation, has made use of that situation, at the expense of others. There’s not a hint of dark humour here, no self-reference or knowing wink; this is rich, dark, scary, mind-bending fantasy that is as fascinating as it is disturbing. 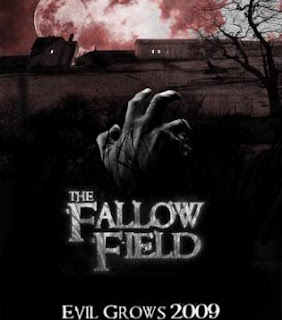 An excellent cast is supported by Nicholas Kindon’s terrific cinematography, in both daylight and darkness, and absolutely superb sound design by Owen Hindley. There’s a pulse-like beat behind some scenes that perfectly complements what is on-screen. Jonathan O’Connor’s production design is top-notch, as are the special effects make-up of Suzanne Neita (Disturbed) and the visual effects of Oliver Simmons. All these combine to support the work of writer-director Leigh Dovey and producer-editor Colin Arnold, whose backgrounds are in TV and corporates (and in Dovey’s case, the RAF). Arnold directed, edited and co-produced the feature-length music doc Guilfest: Grass Roots while Dovey wrote and directed the short film Crush. They met at Cannes a few years ago, discovered a mutual interest in horror and this - filmed in Surrey in 2008 - is the result.

Everyone involved with The Fallow Field can be very proud of their work, but especially Steve Garry and Michael Dacre. This is, for the most part, a two-hander and it lives or dies on the strength of its lead roles. Both actors give stand-out performances and they demonstrate a marvellous chemistry, bringing to life the various stages of the uneasy, ultimately deadly relationship between Matt and Calham.

Sure to go down well with festival audiences and juries, I really hope this gets the distribution it deserves.