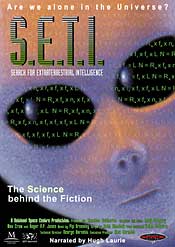 SETI is a 25-minute documentary about the search for - in fact, the possibility of - extraterrestrial intelligence. For the moment, the only place you’re going to see this is in the planetarium-like venue of the ‘Space Theatre’ at the National Space Centre, Leicester, UK - although it may well be shown later at similar venues around the world.

The Space Theatre projects over an arc of about 270 degrees - near enough all around you - and SETI utilises the format well, mixing star-fields and looming planets with panoramic landscapes. The stand-out shot is the giant Arecibo telescope viewed from the centre of the dish. There are more standard cinematic sequences too, most notably an alien named Joe who mutates in various ways to demonstrate why any intelligent alien life is likely to be about the same size as a human, with similar numbers of limbs.

The animation - of both planets and aliens - is smooth and very watchable, and there is a brief cameo by the dancing character who ‘starred’ in Big, Sotheran’s previous film of the Space Centre. The script is simple enough for children while still being interesting enough for adults, and it does a good, surprisingly gentle job of demolishing any suggestion that aliens are here on earth already. There is no mention, however, of the fact that people can play an active part in scanning the stars for life through the SETI@home project, which seems a curious omission.

Nevertheless, SETI is a definite improvement over Big on all counts; not that Big was bad, but Sotheran and team are clearly now more confident with this unusual format. Hugh Laurie’s narration is clear and easy on the ear and displays just the right amount of enthusiasm and amazement.

MJS rating: A-
Review originally published before November 2004
Posted by MJ Simpson at 22:21