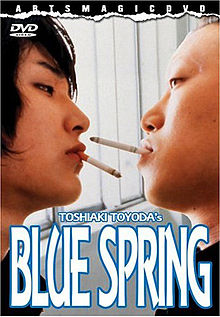 Blue Spring (Aoi Haru) is depressingly bleak but strangely compelling, a sort of anti-coming of age drama without a single sympathetic character set in a world of grime, death and shit (literally).

It follows the last few days of High School of a group of bored, violent teenage boys. The 'boss' of the school is determined by a game which involves standing on the edge of the tallest part of the (square, concrete) school and seeing who can clap the most times before grabbing hold of the railing to save himself. The winner is Kujo (Ryuhei Matsudo: Taboo, Nine Souls) who is largely disinterested in the responsibilities of beating up younger boys and threatening teachers.

His friend Aoki (Hirofumi Arai) eventually usurps command and instills the violent, sub-yakuza atmosphere that seems inevitable in the bleak, thankless, cheerless building. We do occasionally see a teacher, going through the motions of teaching like an automaton, not caring whether he is listened to or not. But most of the action takes place in corridors, on the roof or in the toilets. There is also a curious subplot involving the school gardener (the first Japanese dwarf actor I have ever seen) who encourages Kujo and Aoki to grow some tulips. This is probably symbolic. We never learn anything about the home lives of any of the boys.

With nothing to look forward to - largely through their own making - the school year seems to dribble to a halt: one boy joins a yakuza gang, one had a terminal disease anyway, one is arrested for a brutal murder of one of his comrades. And Aoki... follows a path which seems inevitable.

For sheer unremitting, unpleasant bleakness it's hard to beat Blue Spring; perhaps Cronenberg's Crash comes closest. Like that film, I'm glad I've seen this once but don't particularly want to see it again (which means I will have to forego the pleasure of Tom Mes’ undoubtedly informative commentary).

There have been some comparisons to Battle Royale (in fact I make that comparison myself in the DVD's on-screen notes but only because I hadn't seen the film when I wrote them and was relying on published reviews). 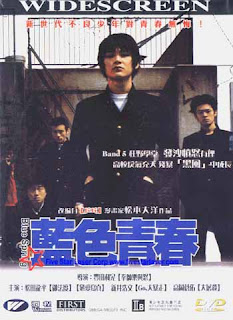 In fact it's nothing at all like Battle Royale apart from being violent and concerning student graduating (or not) from High School. BR was surprising and entertaining with a large cast of characters and a gratifying attitude of the older generation taking violent and ironic revenge on youth. Blue Spring has a small cast of characters, all thoroughly unpleasant and almost all male, none of whom we really care about. Which is not to say it's a bad film - I don't think we're supposed to care about them.

Does anyone learn anything in this film? Do any of the characters progress or develop in any way except straight down (sometimes literally)? No. I think that's the whole point.

Email ThisBlogThis!Share to TwitterShare to FacebookShare to Pinterest
Labels: 2001, Japan