Broken (or, as the website calls it, B R O K E N) is a triumph of style over story, and I mean that as a compliment. The 15-minute production consists largely of a single scene of a young woman, Bonnie (Samantha Jane Polay), kidnapped and bound, being taunted by a smartly dressed, scarfaced villain named Duncan (Paul Gordon) while his henchmen (and one henchwoman) look on impassively - until rescue arrives. Or does it?

There is a prologue of Bonnie waking and discovering an intruder in her home and there is an epilogue which justifies the main scene. Without the latter, there would be no narrative conclusion but it doesn’t really explain what is going on, it just explains why there’s no explanation. I’m not sure if it’s meant to be a ‘twist’ ending but it’s a revelation which wasn’t terribly satisfying when it was first used in a film 86 years ago and still seems a bit of a cheat today.

But all this is okay, in my view, because this movie isn’t really about story. It’s about style, about images, about visuals - and on that level it’s a winner. In today’s world, a short film like this, produced to a thoroughly professional level, can only ever really be a calling card project. Broken is a terrific calling card for its director and his team and I hope it makes some of Powers That Be sit up and pay attention because this little picture has been made by some seriously talented people. 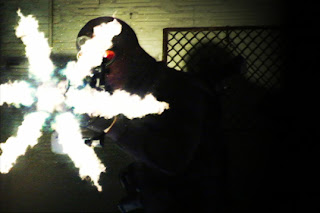 There is so much to admire here, not least the deliberate choice of interesting and complex angles. We don’t actually need that shot from inside the fridge but it works brilliantly and actually does serve a functional purpose because the viewer’s attention is distracted by it and the surprise that follows is all the greater. One of the film’s strongest assets is the very impressive, washed-out look to the cinematography (by Angel Barroeta: Senorita Justice) which seems almost sepia at times. The villain’s purple waistcoat stands out all the more because of this, a little like the red dresses and lipsticks in Sin City (although British viewers might find themselves unavoidably reminded of the old adverts for Silk Cut cigarettes). We never learn anything about any of the characters - in fact several of them have no lines - but the acting is good and mention should also be made of the impressive and imaginative costume and set designs.

It’s a pretty violent and action-packed film considering its short running time although there’s no sadism inflicted on the captive so don’t worry if you’re squeamish. When bullets start flying, the effects and the editing both come into play and both are excellent. In an age when some big, expensive and on the whole pretty good films are let down by directors who simply have no idea how to shoot an action sequence (let’s name names - I’m talking about Batman Begins), Ferrari really shows us how it should be done.

The Broken website has a bunch of designs and information, some of which hint at a much larger story that has had to be heavily pruned to fit into a quarter of an hour. The synopsis, for example, says that the nightmare which wakes Bonnie in the prologue is a recurring dream but there is no way to know that by watching the film, nor can we tell that the main scenes take place in an ‘abandoned medical facility’ without viewing the concept designs. But since there is so little to the plot, this doesn’t really matter. That said, if Broken were to be expanded to feature length - as this extra material suggests could be the case (and indeed Ferrari says he is currently working on this) - it would require a great deal more plot and a much more satisfying and original conclusion.

This screener disc carried just a trailer and brief bios of Ferrari (whose background lies in editing, and I think that shows here), Rodriguez and concept artist/VFX artist Dan Cregan, but the commercially available DVD apparently has a massive two and a half hours of behind the scenes and six - six! - commentaries, plus a whole load of other stuff including an alternate ending. Has a film this short ever been so comprehensively documented?

When it comes down to it, Ferrari, Rodriguez and co. have produced - for a mere $8,000 - fifteen minutes of film which looks like it cost twenty times that amount at least. It looks great, it sounds great, it has images which linger in the mind’s eye for days afterwards and a whole bunch of ‘how did they manage to do that?’ moments. What is more, these guys aren’t waiting for Hollywood to come knocking - they are actively pushing their calling card project to festivals and journalists, building up tremendous word of mouth. Kudos to them.

Those looking for the next big thing, those interested in finding out just how professional an indie film can be with today’s technology (in the right hands!) or just those with an interest in powerful, action-packed short films will get a kick out of Broken (which should not be confused with Adam Mason's film or any of the other 15 or so recent films sharing that title). Ferrari went on to produce the even shorter but still stylish Cyn.