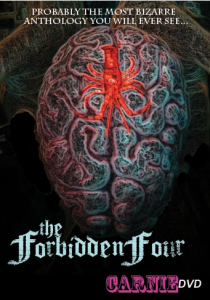 It’s difficult sometimes to review a film made by a friend, to be objective about something. It’s not so much a question of feeling one must be positive about one’s mate’s work, nor a desire to avoid hurting the film-maker’s feelings. It is very simply a question of removing from one’s value judgement, one’s personal knowledge of the chap in question.

In other words, if I didn’t know Thomas Lee Rutter, if I hadn’t acted in a couple of his films (Full Moon Massacre and Mr Blades), if I didn’t get a thank-you in the end credits of this, would I feel about it the same way? I think I would, because The Forbidden Four is the strangest thing you’ll see this year. It’s certainly the strangest things I’ve seen this year. And yet, I didn’t hate it. I actually found it oddly fascinating. Despite the fact that the way I am going to describe it will make it sound like the sort of pretentious, arty tosh that I can’t usually stand.

And I don’t think this is just related to the number of times I’ve had a pint with Tom Rutter. I think there’s something here.

Let’s be clear, there is almost no narrative in The Forbidden Four. It’s an anthology constructed from four shorts which Tom has made over the past few years. The framing story concerns a struggling novelist named Tim who has only a day or so to get over his writer’s block and finish his novel. His friend recommends an isolated cabin where Tim will be alone with nothing except a reading lamp and his laptop. And an alien demonic lobster, which promptly slices the top off Tim’s skull, removes his brain, and plugs its feelers into his frontal lobe. 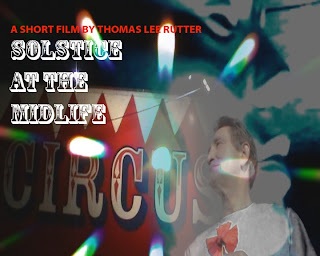 The lobster then proceeds to inject four stories directly into the brain which somehow help the lobotomised Tim to finish his novel. All clear?

Now, I’m used to WTF stuff in Tom Rutter movies, but even I was caught on the hop by the first story which is an adaptation of Sophocles’ play Antigone. Actors in masks silently enact a highly compressed version of the tale on a Greek hillside (it’s certainly not Kidderminster) with the plot explained through intertitles (which aren’t on screen quite long enough and contain one or two typos). This is very much like watching a one-reeler from about 1920: not just the pantomime acting but also the idea of cramming an epic play into about 15 minutes. Except it’s in colour, obviously.

Ironically the second story, A Child’s Toy, is in black and white. This is an exercise in surrealism based around moving dolls (animated through some simple but effective stop-motion) and a sleeping child. The third tale is probably the most coherent: an artist is having difficulty injecting ‘soul’ into his paintings so commits murder to improve his artwork. And finally there is something set at a circus which has no discernible structure at all. A Child’s Toy and the artist story (The Catalyst) were previously combined with two other TLR shorts as an ersatz feature called Quadro Bizarro. 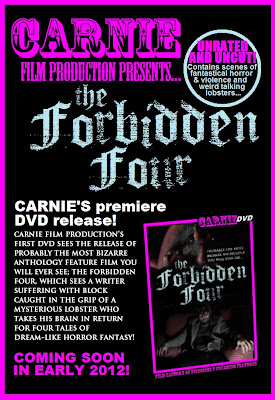 Two things occurred to me while watching The Forbidden Four. The first was that what Tom Rutter has made here is closer to an installation than a feature film. I could imagine this playing on a screen in an art gallery better than I could imagine it in a cinema. My second thought was that Tom will probably be discovered in about 30 years time and hailed in retrospect as some sort of Lynch-ian genius. (He’s only in his twenties now so he’ll probably still be alive so long as he doesn’t fall under a bus.)

I don’t know what The Forbidden Four is about, I don’t have a clue what kind of story part 2 and 4 are trying to tell, if any. It doesn’t matter. Tom’s work is so hallucinatory it’s almost hallucinogenic. Plus, it’s a pretty short film and doesn’t outstay its welcome. However, it would be remiss of me not to point out, as have other critics, the sound problems. The conversation in the opening sequence is almost drowned out by music. And the lobster’s voice is so distorted it’s barely comprehensible (not a sentence I type very often). Tom has an eye for outré visuals but needs to keep a close ear on his sound mix.

Nevertheless, if you have a fondness for the eclectic, the bizarre, the defiantly weird and above all the avant-garde, then you might enjoy The Forbidden Four, which is available from Tom’s Carnie Films website and selected local West Midlands emporia.