One of the interesting aspects of Bulldog Drummond movies is that, for the most part, they have entirely interchangeable, generic titles. They’re all called things like Bulldog Drummond at Bay or Bulldog Drummond Strikes Back, so remembering which is which can be a bit of a headache.

This triple bill disc contains three films: BD’s Bride, BD Comes Back and this one. And the ironic thing is that, although Bulldog Drummond Escapes starts with the title character coming back from somewhere and finishes with him proposing to his future wife, at no time does he escape from anyone or anything. He is handcuffed at one point but he is released through the timely intervention of his drily salubrious butler, Tenny - so that’s Bulldog Drummond Gets Released, isn’t it? And when he is held prisoner towards the end, again it is outside intervention which precipitates his freedom, not any sort of escape. One gets the impression that these films were made without titles and one was then picked out of a hat when it came time to do the credits.

Drummond first appeared on screen in 1922, portrayed by Carlyle Blackwell, and the role was subsequently taken by Jack Buchanan, Ronald Colman (twice), Kenneth McKenna, Ralph Richardson, Atholl Fleming and John Lodge. Ray Milland (Dial M for Murder, X - The Man with the X-Ray Eyes) was the last actor to play Drummond before John Howard made the role his own in a series of seven pictures from 1937 to 1939. This is very much a dry run for that series with several soon-to-be-regulars on both sides of the camera, notably the glorious EE Clive as Tenny and Reginald Denny as Drummond’s silly-ass sidekick Algy.

Clive had a small role as a policeman in 1934’s BD Strikes Back (with Ronald Colman as Drummond) and was also in The Invisible Man, Dracula’s Daughter and two Rathbone Holmes pictures - The Adventures of Sherlock Holmes and The Hound of the Baskervilles - but he is best remembered today as the Burgomaster in Bride of Frankenstein. Denny played opposite two Holmeses - John Barrymore in the 1922 film Sherlock Holmes and Basil Rathbone in The Voice of Terror twenty years later - and opposite Karloff in John Ford’s superb desert war movie The Lost Patrol in 1934. He was also in Mr Blandings Builds His Dream House, The Secret Life of Walter Mitty, Abbott and Costello Meet Dr Jekyll and Mr Hyde, Around the World in 80 Days and the 1960s Batman movie. However, his greatest contribution to history was away from Hollywood: he founded a model aeroplane company which designed and built some of the first successful radio-controlled military drones, used by the USAAF for target practise throughout World War 2. 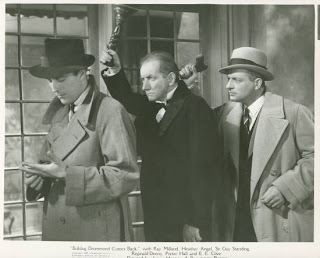 Heather Angel (who was in the 1932 Hound of the Baskervilles and was the voice of Mrs Darling in Disney’s Peter Pan) as Drummond’s girl Phyllis was replaced by Louise Campbell for a couple of other 1937 productions (BD’s Revenge and BD Comes Back) but then returned for the remaining Howard pictures. However, this was the only film to feature Sir Guy Standing as Scotland Yard’s long-suffering Colonel Nielson (here called ‘Inspector’), a role taken by no less an actor than John Barrymore for the next couple of films and then by HB Warner for the rest of the late 1930s Drummond pictures. Standing might well have continued in the role but he died in February 1937 after being bitten by a rattlesnake. Director Hogan was responsible for four of the seven Howard Drummonds and writer Lowe scripted another two.

The action starts with Drummond returning by plane from a sojourn on the continent, expertly landing in a thick London fog at night, much to the consternation of the rudimentary 1930s equivalent of air traffic control. A bunch of reporters want to get soundbites from him, but he is just concerned about getting back home to Rockingham Lodge. On the way, he nearly knocks down a distraught young lady who faints as he screeches to a halt, Putting her into his car, he sets off to investigate gunshots and finds a dead body on the edge of a marsh. Returning to the road, he sees that the young lady was just faking and she is now driving off with his wheels. He goes back again to the marsh just in time to see the body slide beneath the surface.

The young lady is Phyllis Clavering, who is staying at Greystone Manor, which is next door to Rockingham Lodge (but about three miles away!). Caring for her are pointy-bearded Norman Merridew (Porter Hall, who played a different role in BD’s Peril the following year), his sister Natalie (Fay Holden, the mother in the Andy Hardy films) and bogus psychiatrist Professor Stanton (Walter Kingsford: The Invisible Ray, The Loves of Edgar Allan Poe and Dr Carew in the 1930s/40s Dr Kildare movies). Of course she is being held against her will, but how can Drummond prove this, especially with Inspector Nielson down for the weekend to play golf with his old friend Merridew? 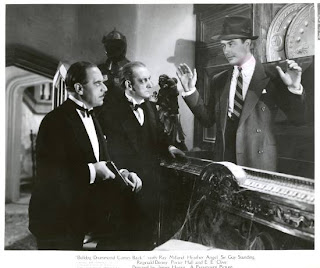 With the exception of the opening sequence at the airport, the film is very obviously adapted from a stage play - Bulldog Drummond Again “by HC (Sapper) McNeile and Gerard Fairlie” - and you can easily imagine the scene titles: ‘The drawing room of Greystone Manor, later that same night.’ Most of the events happen in a few rooms in the two stately homes, or just outside the rooms, visible through the French windows. There are mistaken identities, coshes to the head, surreptitiously passed notes and a bunch of other elements which seem iconic of 1930s theatre. Frankly it is never really explained (a) why Phyllis is being held captive or (b) why she doesn’t just escape with Drummond at the start when she flags down his car.

It all finishes with the discovery of a counterfeiting operation producing fake ‘series D war bonds’, a form of investment which is given the most extraordinarily unsubtle plug earlier in the film. In amongst all this is a subplot about Algy’s (unseen) wife Gwen giving birth to his first child, so that his priority is always to try and phone the hospital. Denny plays Algy as a bumbling but good-hearted chap, the sort frequently spoofed by Harry Enfield; he’s a cross between Time Nice-But-Dim and Mr Cholmondley-Warner’s friend Grayson.

In many ways, Bulldog Drummond Escapes is an archetypal Bulldog Drummond film. It’s not quite tongue-in-cheek, certainly not a spoof or pastiche, but there is a delightfully light touch to the dialogue, especially that involving Tenny. When the butler recovers his master’s car and finds Phylllis’ handbag in the footwell we get the following gem: “Does it portend, Tenny?” “It portends, sir.” Marvellous! Milland seems to be having a ball, playing a grinning young Drummond who can’t believe how exciting his life is, while Standing is terrific as the senior policemen who doesn’t want Drummond’s exciting life interfering with his work.

With the exception of Porter Hall, the entire principal cast is British - and so are most of the supporting players. Patrick J Kelly (the 1939 Tower of London) provides heavy support as the Merridews’ looming butler Stiles and others in the cast include Charles McNaughton (who had an uncredited role in 1934’s BD Strikes Back) and Clyde Cook (who was a clown in Lon Chaney’s He Who Gets Slapped and had bit parts in five later Bulldog Drummond films) as policemen; Doris Lloyd, who was in 1933 versions of Oliver Twist and A Study in Scarlet, and also had bit parts in The Wolf Man, The Ghost of Frankenstein, Frankenstein Meets the Wolf Man, the 1941 Jekyll and Hyde, The Invisible Man’s Revenge, Son of Dr Jekyll, The Time Machine, Mary Poppins and The Sound of Music(!), as a nurse; and David Clyde, who played policemen in BD’s Peril, Arrest BD, BD’s Secret Police, The Scarlet Claw, Frankenstein Meets the Wolf Man, The Lodger and several other films.

Uncredited actors include Robert Adair, who was the other hunter alongside John Carradine in Bride of Frankenstein, J Gunner Davis (also in BD Strikes Back), Zeffie Tilbury (Werewolf of London and three other Bulldog Drummonds), Colin Tapley (Blood of the Vampire, Shadow of Fear), Pat Somerset (Zita Johann’s dancing partner in The Mummy), John Power (rentacopper roles in Dr Jekyll and Mr Hyde, Dracula’s Daughter etc) and Barry Macollum (Revenge of the Zombies).

Director James Hogan started out in the late 1910s and followed this film with BD’s Peril, BD's Secret Police and BD's Bride and Arrest BD. In the 1940s he made six Ellery Queen thrillers, the bizarre propaganda vehicle The Strange Death of Adolf Hitler and one of Universal’s lesser known horror pictures, The Mad Ghoul. Edward T Lowe’s other writing credits include not only BD’s Revenge and BD Comes Back but also House of Frankenstein, House of Dracula, Tarzan’s Desert Mystery, Sherlock Holmes and the Secret Weapon, three Charlie Chan films, The Vampire Bat and the 1923 Hunchback of Notre Dame.

Hans Dreier (Island of Lost Souls, the 1931 Jekyll and Hyde, The Monster and the Girl, Dr Cyclops and numerous Bob Hope pictures) and Earl Hendrick (two other Drummonds) are credited with art direction and AR Freudeman (the 1939 Cat and the Canary) with ‘interior decoration’. Sound recording was by Gene Merritt and John Cope, the editor was William Shea and the musical director was Boris Morros (Stagecoach) who spent his time away from the studio spying for the Soviet Union! The uncredited cinematographer was Victor Milner whose work is adequate throughout but becomes strangely effective towards the end, bordering on expressionism in some of the candlelit corridors.

Email ThisBlogThis!Share to TwitterShare to FacebookShare to Pinterest
Labels: 1937, UK