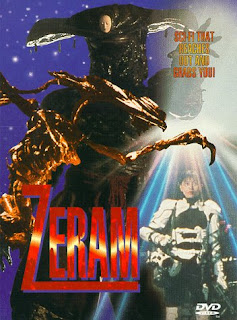 Hard to believe in these enlightened times when films like Evil Dead Trap and Uzumaki are available in your local HMV, but less than ten years ago it was almost impossible to buy Asian films in the UK. During my three years on SFX magazine pretty much the only Japanese films available on British video were seven (of the then 22) Godzilla pictures, endlessly repackaged and constantly on Channel Four, plus a handful of Kurosawa’s best-known features and a few other art-house titles.

We didn’t have DVDs in those far-off days of 1995 and the internet was still something of a hit-and-miss affair. One read about these amazing films in magazines like Cult Movies and Damon Foster’s unputdownable Oriental Cinema, but to actually have the chance to watch them ourselves, it was unheard of. So when Zeram appeared on the short-lived Manga Live video label, I grabbed the review copy straightaway. And I thought it was great.

Rewatching it again eight years later, it’s still fun but I’ve got more to compare it with now. Most of all, I was enormously surprised to find that this release was dubbed - and not very well dubbed either. DVDs spoil you for things like subtitling.

Zeram (Mizuho Yoshida, who was inside the Godzilla suit in GMK: Giant Monsters All-Out Attack) is a bio-engineered killing device which has escaped and is on its way to Earth. Iria (Yuko Moriyama: Reborn from Hell I and II) is a bounty hunter assigned to recapture it. Blimey - that’s the plot of Lilo and Stitch!

With the help of her talkative computer Bob - which really dates the film as early 1990s - Iria creates a sort of VR copy of the part of town in which Zeram is about to land. Unfortunately in transporting herself into the ‘zone’ she accidentally transports in two bumbling but well-meaning engineers from the phone company, Tepphei (Kunihiro Iida: Another Heaven) and Kamiya (Yukijiro Hotaru: Cure, Stacy and Shusuke Kaneko’s Gamera trilogy).

The film then becomes a series of attempts to capture and hold Zeram, who creates small squidgy underlings from little bombs that he throws. It’s all fun enough but lightweight and straightforward. Iria looks sexy in her plastic body armour and Zeram looks even scarier when he drops his cloak, and the two guys aren’t as irritating as most comic relief. Zeram (also spelled Zeiram) is a fun film, but not an essential film, though I would definitely like to see a subtitled version. 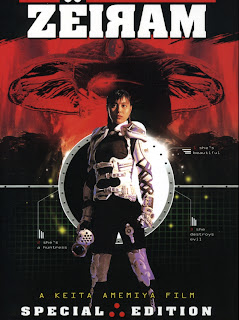 He did special effects on Gunhed and Peacock King, and his other directorial TV credits include Dynaman, Maskman, Liveman, Jetman and Kamen Rider Z (according to the Inaccurate Movie Database he was cinematographer on Kamen Rider J and costume designer on Kamen Rider Black RX!). He directed (but did not write) Zeram 2 in 1994 and wrote (but did not direct) an anime prequel in 1993 entitled Iria.

Hajime Matsumoto, his co-writer (also credited with the original story and sole scribe on Zeram 2) is a special effects technician whose credits include Gamera: Guardian of the Universe, Ju-on I and II, Ring and Rasen. The English dub was written by (and features) voice actor Steve Kramer who has also written episodes of Power Rangers and the utterly brilliant Samurai Pizza Cats. Robert Axelrod (Sorority House Massacre, Death Wish 4, The Blob remake, Deep Freeze) is also among the dubbing cast.

MJS rating: B
Review originally posted before November 2004
Posted by MJ Simpson at 22:41