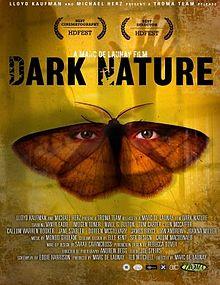 As a child, I spent a couple of very enjoyable family holidays in Dumfries and Galloway, the south-western corner of Scotland which is a sort of peninsula sticking out of the country so that part of it is actually further south than the English border. It’s a lovely part of the world and is shown off here to good effect (well, one particular bay) by the HD cinematography of Andrew Begg (who has also DP-ed numerous horror-related documentaries, including Scream and Scream Again: A History of the Slasher Film).

If you are one of those undiscriminating slasher fans (I know there are many) for whom things like plot and characterisation are mere distractions from a series of violent murders, then you might enjoy Dark Nature. For everyone else, this will prove a mind-numbingly tedious experience, despite its brief 75-minute running time. We’ve got a shouter here, folks: I yelled a number of exasperated questions at the screen while sitting through Dark Nature's tale of a family visiting their grandmother, of which the two most frequent were “Nothing has happened yet!” and “Who are these people?”

What journalist-turned-screenwriter Eddie Harrison and director Marc de Launay (both making their feature debut) have forgotten is that films are about characters, and characters are defined by relationships. And despite a fairly small, compact cast, by the end of the film we still have no idea how most of these characters relate to each other (quite apart from wondering what they are actually doing).

A prologue to please the slasher fans has an old lady brained by an old man who smashes her head in with a typewriter. This is followed almost immediately by another murder which, confusingly, seems to be another bloke killing the old man. But there’s no sense of revenge - and we know not one thing about any of these characters - so we’re left with just confusion. Added to which is the reasonable assumption, given that the lady is using a manual typewriter and listening to vinyl LPs, that this is some sort of 1970s-set prologue and the main story (this was filmed in 2008) is thirty years later.

We will gradually realise that the old lady is the mother of the Mum in our central family, although there will be no reference whatsoever to the old man until very near the end. In fact we are specifically told that Grandma lived alone except for a ‘gamekeeper’ whom she employed, but eventually, when a body is discovered, our Mum character will identify it as her stepfather. We are also told by a neighbour that there has been no-one seen at the house for weeks, indicating that the prologue was neither recent nor decades past but a couple of months ago. So wait: are we saying that Mum and her family arranged to visit Grandma’s house but didn’t speak with her at all in the preceding weeks?

Then again, there is a mention that Mum grew up here as a child but hasn’t been back since then. Really? You’ve never, ever taken the kids to see Grandma? What, have you been living in Canada or something? Why then is there no sense of excitement and discovery at visiting this amazing location? Everyone seems familiar with the large, isolated house on the edge of the bay and its surrounding countryside.

The problem here, let’s face it, is that Harrison’s script is incompetent on a whole number of fundamental levels. Remember the old adage ‘show, don’t tell’? Well, you have to do one or the other, dude! There is a whole bunch of things that we simply never get told or shown, even when the film eventually starts after a long, arty title sequence and a tedious six minutes of the family driving along.

We learn that the bloke driving is Mum’s new boyfriend though whether she is widowed or divorced is not stated. Teenage daughter doesn’t like him, but she doesn’t like Mum either. Her younger brother gets on well with the new bloke but, wait: is he actually her brother, or is he her mother’s boyfriend’s son? The lad has no character and nothing to do throughout the film so this fundamental piece of information never arises. Clearly Harrison and de Launay know that he’s her son, not his son - brother, not quasi-step-brother - but they haven’t bothered with the single line of dialogue that would make this clear.

There is another couple who have also come to visit Grandma about whom we never find out anything at all. From the few lines of dialogue they’re given, it would seem they’re not relatives of this family - so who are they? They’re knife-fodder, that’s who; pointless characters who exist solely to increase the body count.

This really is utterly useless storytelling. Harrison clearly has not one clue about how to unfold a narrative on screen and de Launay is convinced he’s making some sort of art film. It seems to be a stylistic homage to 1970s Italian horror and, to be fair, the director and the DP have captured that look well. Of course, 1970s Italian slasher films were not noted for their generally high standard of plotting and characterisation: a few were excellent, many were cheap, exploitative trash. But hey, cheap, exploitative trash can be fun. Boring, pretentious rubbish isn’t.

Apparently several plot elements of Dark Nature have been lifted wholesale from Mario Bava’s Bay of Blood/Twitch of the Death Nerve (which I will admit to not having seen) but not this film’s main conceit which is never, ever alluded to on screen. Wikipedia’s synopsis for Dark Nature states “Unbeknownst to Jane and her family, their relatives have been murdered by a sinister force, and that dark and unnatural something remains, waiting for them.” and I’ve read at least one review which reckons that there is an “invisible vapour” causing the murders. The blurb on the film’s website describes it as an “eco-thriller” and there’s a bunch of unconnected things about nature taking ‘revenge’ - but if any of this has any relevance, it’s kept well-hidden.

What revenge would that be, anyway? Revenge for spoiling the countryside by building a house and a road several decades ago? Revenge for a pheasant hit by the family’s car several miles away? (This apparently has some significance as they bury the bird by the roadside with an ice lolly stick cross that later turns up at the house. But Jeezus, pheasants get hit by cars every day...)

Also among these unconnected ‘eco-thriller’ bits is a neighbour who wanders the woods with a butterfly net and specimen jars, occasionally videoing himself talking unscientific guff about entropy. He describes himself as an environmentalist even though he is plainly an entomologist (with jars of cockroaches at home). This bloke, whose name we never learn (like most of the characters), lives with his tarot-reading wife in a neighbouring cottage which - in possibly the most outrageous continuity cock-up I’ve seen this decade - is one storey tall on the outside but two storeys inside. Like some sort of Scottish Tardis.

Mum has a dream/premonition/flashback in the car during the lo-o-o-ong sequence of the family driving to Gran’s, including this tarot lady, plus some aspects of her mother’s house which she is amazed to see are true - even though she grew up here! She even ‘foresaw’ a specific issue of a TV listings magazine, which is hardly spooky because she could have seen the same issue anywhere. Of course, if Gran was murdered several weeks ago, then that magazine would be well out-of-date which could have been an element of mystery, but neither writer nor director are smart enough to think of something like that. (Not saying I’m smart either - though I could write a better script in one afternoon down the pub - I’m saying it’s obvious.) Anyway, we learn who the killer is fairly early on - but never why, and neither the prologue nor the ridiculous ending make any sense whatsoever. 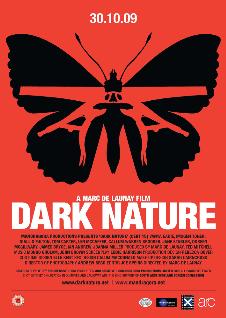 Once again I am spending far, far too long thinking about something, the creators of which didn’t think about at all. In summary, there is virtually no plot to Dark Nature; there is no characterisation whatsoever; attempts to present something more than just a series of murders are pretentious and stupid; no-one has any motivation for anything that they do or say (including killing people); and above all the film is boring beyond belief.

Apparently the US disc released (bizarrely) by Troma had a commentary although that’s not on the UK disc and anyway you couldn’t pay me enough to sit through this amateurish nonsense twice. There is a Making Of and two short films, one directed by de Launay, one written by him. I didn’t watch any of these. I had already given this screener an hour and a quarter of my life.

Dark Nature played a few Scottish cinemas in late 2009 and was released in the States in 2010 but didn’t appear on UK disc until New Year’s Eve 2012. It really wasn’t worth the wait.