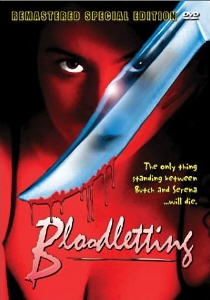 A couple who love each other even as they’re killing other people - it’s an old, old story. From Bonnie and Clyde to Natural Born Killers to Psychos in Love and all points inbetween, it’s been done different ways and to different standards. Bloodletting is how to do it properly.

Tempe regulars Ariauna Albright and James L Edwards (both also in Polymorph and The Sandman) play the couple. He, Butch Harlow, is a notorious serial killer, wanted by the police; she, Serena Stalin, is the young woman who tracks him down and says, “Teach me.” Gradually, suspicion becomes respect which becomes attraction. You know it’s going to end up horribly 89 minutes later, but you don’t know how or why, and writer-director Matthew Jason Walsh has a twist up his sleeve that’s as startling as it is brilliant. 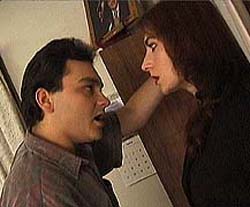 Where Bloodletting really scores is in the acting and the script, the two areas where so many low-budget films fall down. Edwards and Albright are veterans of this sort of thing and they’re terrific here, really sparking off each other, especially in the final scene. A generally terrific supporting cast includes Scooter McCrae (Shatter Dead, Original Sins) as a virgin stoner, Tina Krause (Witchouse 3: Demon Fire, Psycho Sisters) as a scatty goth-chick and Sasha Graham (Polymorph, Blood of the Werewolf) as a lesbian video store proprietor. All are well-served by Walsh’s witty and taut script, peppered with quotable one-liners that never come off as smart-arse. In many ways, this is the blackest of black comedies.

Every scene serves to either progress the plot or enhance characterisation, though some are a bit talky and static and could have done with some background or foreground action to complement the dialogue. Yes, it’s violent, with some gruesome deaths courtesy of Walsh’s own Digital Armageddon effects company, but these are not there for their own sake and are not lingered on, so do not distract from the story which they serve. 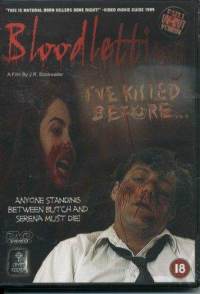 A cracking, professional-looking feature, it’s great to have Bloodletting out on special edition DVD. You get a commentary by Albright, Edwards and Walsh, a half-hour Making Of featurette, three trailers and a couple of very brief ‘deleted scenes’ which are really little more than a couple of lines of extra dialogue and show up how well-written the script was to start with. There are about 60 or 70 production stills, a bunch of trailers for other Tempe product and a half-hour short called I’ve Killed Before which is an early version of the Bloodletting story (with commentary by producer Ron Bonk).

This is Matthew Jason Walsh’s only feature as director though he shot second unit on Ozone and Polymorph. His writing credits include Ancient Evil: Scream of the Mummy, The Sandman, Witchouse I and III, The Brotherhood I, II and III, Final Stab and Deep Freeze. Executive producer and Tempe head honcho JR Bookwalter handled editing duties, Psycho Sisters director Pete Jacelone’s name can be spotted in the credits, and Fangoria’s Michael Gingold has a cameo in the opening scene.

MJS rating: A-
Review originally posted before November 2004
Posted by MJ Simpson at 19:30