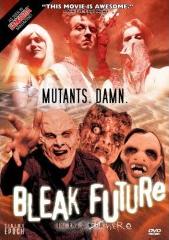 The DVD of Bleak Future arrives bedecked with praise. “This movie is awesome,” says Aint It Cool News. Well, they say that about almost everything (although to be fair, the entire budget for this film was probably less than some studio publicists spend on promoting crappy blockbusters through Aint It Complete Nonsense).

“The energy and enthusiasm of Peter Jackson’s Bad Taste,” says Nathan Shumate at Cold Fusion Video Reviews. Well, I know Nathan slightly through discussion boards and I find his reviews to be accurate and insightful (and entertaining). I trust this guy’s judgement.

But hey, what’s this third quote? “Funniest sci-fi film in years,” says ‘Mike Simpson, SFX magazine’. What the heck does he know about anything?

Ah, I love DVDs that have quotes from me on the back! And I love even more films which, when rejigged and rejogged for a super-wicko DVD release actually include me in the ‘thank you’s at the end! I do recall reviewing Bleak Future when it was released on VHS in the UK by the old Screen Edge label in 1998. And I did indeed write that quote and, having watched the film again nine years later, I stand by every word of it (all five of ‘em). Bleak Future really is one of the funniest science fiction films of recent years. What is more, I’ll go further. This isn’t just comedy for comedy’s sake, this is actually one of the best post-apocalypse movies ever made.

It’s always tempting with post-apocalypse films to compare them to Mad Max (or Mad Max 2) but two titles jumped into my head while watching the Bleak Future DVD and they refused to go away. If I had to stop writing now and sum this film up in one sentence, I would say: ‘Bleak Future is Beneath the Planet of the Apes meets The Bed Sitting Room.’ 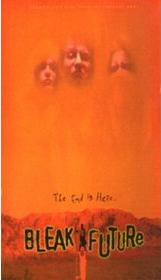 But I don’t have to stop writing now. I can go into some detail about why this movie is so damn good.

In a world of ruins and deserts, Slangman (Frank Kowal) wanders across the land. Possessor of a large dictionary, he makes his living by selling definitions of words (I particularly like the idea that the exchangeable currency in this world is batteries). Self-styled ‘most intelligent man in the known world’, Slangman is irritable, self-confident and often exasperated. Searching for the mythical ‘Source’, said to be a repository of knowledge from before the great cataclysm, he gathers around him a small coterie of acolytes. There’s Atlatl (Brad Rockhold), a mute Scottish warrior; Femme (Wendie Newcomb), a bimbo actress; and Brother Alfonze (Steven A Kowal - Frank’s brother) a hippy hermit.

Standing in his way are a range of ‘mutants’ including Doctor Obvious (Rob Cunningham) who also believes himself to be the smartest man in the world; King Malice (played by a guy credited only as Bones) and his mutant court; and the terrible Malathion Man (Tom Johnson) armed with what appears to be highly acidic urine.

As Slangman and co. stumble across the patchy desert towards the Source, we break off occasionally for documentary footage of what happened to the world. An era of unprecedented peace and prosperity led to the development of the Pangaea Project, an attempt to move the planet’s tectonic plates to create one super-continent without countries or borders. The film’s climax is both the end of Slangman’s journey and the culmination of the documentary, the latter explaining the circumstances of the former. In this respect it reminded me of a terrific SF novel I once read, The End of the World News by Anthony Burgess, which used a similar structure but with three narrative strands.

The thing about post-apocalypse movies is that, their setting generally being a featureless desert, it’s the characters that make them. And Bleak Future has great characters. It’s a wonderfully restrained film that doesn’t try to go overboard on ‘clever’ dialogue but instead lets us learn about the characters through their reactions to the world around them. 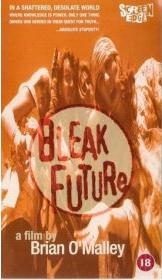 And it’s a marvellously constructed world, a credible, crumbling fin-de-civilisation wilderness which has created its own rules and its own society from the remnants of what was once there. You can believe that there are still actors staging crappy fringe theatre - and that in a world without TV or radio, people might actually watch such stuff. You can equally believe that hordes of insane warriors charge around with swords and sticks. You can believe anything if it’s presented with an intelligent, satirical bent.

When I first saw Bleak Future on that Screen Edge VHS, in those far-off days when ‘DVD’ was still a sexually transmitted infection, it was a rough and ready thing. It was clearly a labour of love. Shot on Super-8, the grainy, sometimes wobbly image looked like a real, grown-up film. There was nothing digital in those days except watches and alarm clocks so you either shot on 16mm if you could afford it or Betacam if you couldn’t. The former looked polished and left you unfairly compared with the 35mm big boys, the latter invariably looked like a wedding video. But there was a grittiness to Bleak Future that marked it out as something special, something that somebody really, really cared about.

Well, God bless Brian O’Malley because he has managed to upgrade Bleak Future into a minor masterpiece - without losing that same rough and ready feel. For three years he used modern technology to make the old film look like it would have done when new if today’s technology had been available back then but had worked like the old technology did when the film was made. D’you see?

The film has been re-edited and digitally doodah-ed; tints and tones have been added; pick-up shots have been filmed in the same locations and seamlessly integrated; the entire dialogue track (so often the Achilles' heel of enthusiastic low-budget movies) has been recorded with all but one of the original cast looping their own lines. I no longer have that old VHS so I can’t make direct comparisons, not that I need to. The new version of Bleak Future is a thing of beauty - that’s all you need to know.

And what a package on the DVD: literally hundreds of stills, designs, pieces of artwork and publicity materials. Stacks of behind the scenes footage and commentaries which document the incredible story behind the film. The scenes with the stuck truck are priceless. This is one of the best value DVDs I have ever seen, packed with so much stuff it would take you weeks to get through it all. Sometimes a multiplicity of extras masks a shoddy feature but not in this case. On the Bleak Future DVD, the extras complement the feature magnificently, creating an all-round entertainment package that means you may never have to leave your armchair again. 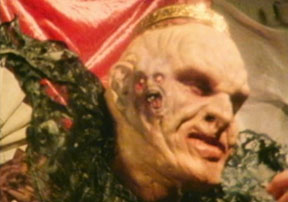 But what of the cast and crew of Bleak Future? Where did life take them after making this film? Frank Kowal was set decorator on some of Steve Oedekerk’s ‘thumb’ spoofs and was production secretary on Roger Corman’s Black Scorpion TV series. Wendie Newcomb worked on the digital effects on Black Scorpion and a few other pictures. Steven A Kowal was a runner on Black Scorpion (I sense a pattern developing here). Producer/co-writer Steve Darancette went on to pen episodes of Krypto the Superdog and Biker Mice from Mars. Most of the cast and crew simply returned to normal life. As for O’Malley himself, he made one more feature, Minimum Wage, and worked for Roger Corman for a while, including a stint as script co-ordinator on, unsurprisingly, Black Scorpion.

In a way, the fact that Bleak Future has not been followed by a string of other indie movies makes this all the more special. O’Malley seems to have dedicated most of his life to Bleak Future in one form or another and it shows, the love shows, the passion shows. I mean, yes, the guy really needs to put this behind him now and get out of the house a bit more, maybe kick a ball about in the yard or something, but you can’t fault his dedication. This is the sort of feature film that you get to make only once, before you realise how much ridiculously hard work is involved - which is ironic because in a sense he has made it twice.

Are you getting the impression that I rate Bleak Future highly? You’re damn right I do. This was one of my favourite films even before O’Malley stuck my name in the end credits. A brilliant piece of fantasy storytelling, a hilarious comedy, a penetrating satire on the human condition - and that’s just the Making Of featurette. The movie itself is all this and more. In fact, this deserves something that I have almost never handed out in all the years I have been running this website. Brian Scott O’Malley, I award you...