Andrew Marshall, in partnership with David Renwick, wrote The Burkiss Way, Whoops Apocalypse (TV series and film) and Hot Metal, then wrote 2.4 Children solo. In March 2002 I contacted him just as the pilot for his fantasy series Strange was about to air. (In April 2003, a few weeks before the full series of Strange was broadcast, I spoke with Andrew again.) 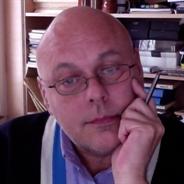 What can you tell me about Strange?
“Strange stars Richard Coyle as John Strange, a former priest who is engaged in seeking out demons in human form in a dark, unnamed cathedral town in England, aided by Samantha Janus as Jude Atkins, a nurse in the City Hospital. She has a sceptical boyfriend (Alastair Mackenzie) who tries to persuade her that she is engaging forces too dangerous to contemplate, and the investigation is hampered by the destruction of evidence by Cathedral Official Canon Black (Ian Richardson) who seems to be following a mysterious agenda of his own...

“Joe Ahearne (Ultraviolet) directs, Marcus Mortimer produces, I am the writer/exec producer, digital effects are by Framestore, and the music composed by Dan Jones (Shadow of the Vampire) is played by the Royal Philharmonic Orchestra.”

The male/female, sceptic/believer set-up may make some people see this as an attempt to emulate Buffy the Vampire Slayer. How would you respond to that?
“The show began development in excess of three years ago, and I can say with my hand on the Holy Bible that I have never seen an episode of Buffy. I did see the movie some time ago, but didn't think much of it, so never switched on the series... then when I started doing this, I made a point not to start watching in case it distracted me. So, you see, I have no idea how it compares in any way." 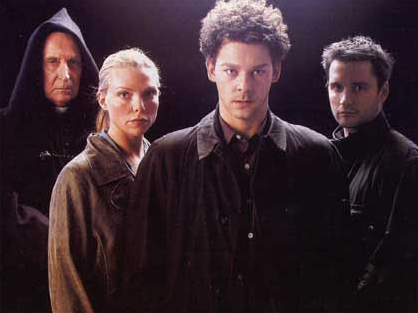 The show is set to air straight after Casualty, which is a very different sort of show. Are you happy with that slot?
“I see no reason why the Casualty audience shouldn't also enjoy this - which is simply an attempt on my part to write something in a more filmic style of dramatic entertainment than is usual on TV. The unusual mix of elements, which reflect everything I like to watch myself when out for an evening of fun, is reflected in the co-production of the series between Entertainment and Drama. This is also the parentage of Jonathan Creek but, as you will see, this is a very different type of thing altogether.

“Having said that, I very much hope science fiction and fantasy fans will not be disappointed, and, in order to say hello to them, there is a small greeting in each episode for the fans of a certain show. They will know who they are."

interview originally posted before November 2004
Posted by MJ Simpson at 17:57