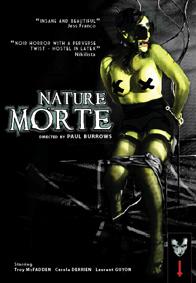 I’m hopeless with thrillers, me. I can’t follow them at all. Take a look at the stuff on this site: comedies, monster movies, science fiction, horror, action, animation, even the occasional documentary. Frankly I just don’t watch many thrillers because anything more complex than a straightforward whodunnit leaves me struggling to keep track. All these people double-crossing each other and pretending to be someone they’re not. What’s going on?

So I can’t say it’s necessarily a failing of this film that, after 90 minutes, I was left staring at the telly saying, “What on Earth was all that about?”

Nature Morte is, it should be said from the start - well, almost the start - impossibly stylish. Just take a look at the website and you’ll get some idea. Everyone in it is very cool and smokes a lot and hangs out in bars and has either a deeply cool job or no obvious means of support. They’re all either intense or laid-back and most of them are, or speak, French. Watching this movie is like having a succession of Blue Note jazz LPs repeatedly smashed over one’s head - it’s just too deeply stylish.

The plot concerns John Stephenson, a serial killer who tied up and killed ten women in Marseilles, fetishistically scarring them and - the bastard! - painting their portrait. At the scene of the tenth murder, the killer’s body was found too, he having committed suicide. The tenth, unfinished painting has been carefully guarded by the French police since then, so that not even Oliver Davenport (Troy McFadden), the world’s leading authority on John Stephenson, has seen it.

Davenport finally gets to see the painting when the gendarmes call him in to compare it with a copy they have found - except that the copy is finished, and scientific analysis shows that it was painted very recently. Davenport confirms the new painting as a genuine Stephenson, which raises the question: was the ‘suicide’ actually John Stephenson? Is he still at large? Where has this new painting come from? 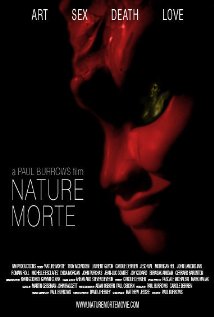 It has come, apparently, from Ladang Geta, a tiny island republic off the coast of Thailand, to where Davenport travels, accompanied by undercover cop Capitaine Albert (Jeso Vial). Ladang Geta is some sort of anachronistic post-colonial hang-out, full of rich, decadent Europeans throwing parties or sipping cocktails in the beach-front bar which doubles as passport control. It is accessible by boat, but only when the local ferryman isn’t busy relaxing.

Among the locals is the enigmatic, decadent and wealthy Blanche de Ladang (producer Carole Derrien: MindFlesh) and her lover, a deeply intense and pretentious artist named simply Lec (Thai-based French actor Laurent Guyon), who painted the ‘new’ Stephenson and has others for sale. Is Lee actually the Marseilles killer? If not, is he just forging the killer’s paintings, or is he copying the murders too? There is also an American pimp on the island, Randall Sparx (John Lamond Jr, a Bangkok-based film-maker whose feature Killing Time 24/7 shares several cast with this picture) who seems to know more than he’s telling.

Around this point, I started to lose track of things amid a succession of images involving paint, naked women, sexual fetishes and the occasional murder. I think - only think - I worked out the identity of the killer(s) right at the end, but obviously to give you my suggestions would potentially spoil it for you. And anyway, just because I think I solved the whodunnit doesn’t mean I understood how or why they dunnit.

For a debut feature, Nature Morte is incredible. In an interview on the film’s website, Paul Burrows freely admits that he had never even been on a movie set before (and also recounts some of the problems involved in doing such an ambitious film on such a wee budget). The cinematography is superb, although as there are three credited cameramen and two uncredited ones, it’s difficult to single anyone out (one of them is John Raggett who also worked on The Witches Hammer and Nightmares).

Production design is fabulous too. This is a film that is all about image: both in terms of the film and in terms of what the characters think they know about each other. It’s in the editing that I think the movie goes overboard with a few too many ‘sequences’ which seem to stop the action and character development to dwell on cinematic style.

Originally, much of the film was going to be in French but that has been reduced to just the odd subtitled line here and there. Most of the cast do still speak with strong French accents and this makes some of the dialogue sound rather stilted, but I think that actually fits in with a film where affectation and pretence are such major themes.

This is a terrifically impressive movie which somehow manages to be arty while steering just clear of pretentiousness. I just wish I could follow what was going on.