Before he got married in My Big Fat Greek Wedding, before he was a semi-regular on Sex and the City, John Corbett was Chris-in-the-Morning on Northern Exposure. Inbetween Northern and Sex, he was intergalactic outlaw Jason Thorpe in this movie. Well, I say ‘movie’ but some things just scream ‘failed pilot’ before you’ve even taken the tape out of the box - and here’s one of them.

Thorpe lives with his supergenius ten-year-old sister Nova (J Madison Wright: Earth 2) on the planet Caliban 5, ruled by warlord Heenoc Xian (an overacting John Pyper-Ferguson: Space Marines, The Adventures of Brisco County Jr). It sounds for all the world like the character is called ‘Enoch Sean’, but apparently it’s ‘Heenoc Xian’... Anyway, it is years since the Galactic Republic fell and most worlds have reverted to a clichéed sort of techno-barbarism. It’s the sort of society where people live in semi-squalor but have super-advanced computers.

When Nova disappears, apparently kidnapped by some off-worlders in a cloaked ship, Thorpe seeks help from Xian who has the only interstellar craft on the planet, the Daedalus, but to no avail. Fortunately, Nova’s best friend is 15-year-old Maggi Sorenson (Elisabeth Harnois, later on All My Children), ace pilot, whose grandfather General Lars Sorenson (Time Machine star Rod Taylor) still holds dear the values of the Old Republic. Sorenson also owns a large, shark-like vessel, the Osiris, in orbit above Caliban 5, which is in full working order apart from its engines. The only race who could repair it are the mysterious aliens called ‘the Engineers’ who will come if paid enough, so Thorpe steals some jewels from Xian’s coffers and the silent, cloaked, hooded figures set to work getting the tachyon engines back on-line. 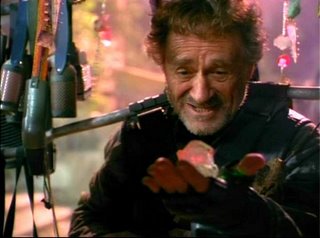 Sorenson of course has his own agenda: he wants to rebuild the Republic and to do so requires Trajan Cabel, grandson of the last Proconsul, Julius Cabel. Typically woolly American politics there: the only person who can create a republic will do so not because of any political skills or because of any mandate from the population, but purely because of who his grandfather was. Very democratic, that.

The rest of the crew of the Osiris come aboard for no real reason at all. There’s token black guy Wally Price (Darryl Theirse: Crocodile 2, Bug), an old friend of Thorpe’s who has ‘really strong feelings’ but is not actually psychic or telepathic. And who just happens to be on his ship with him but Sorenson’s daughter - and Maggi’s mother - Rula Kor (Carolyn McCormic: Minuet in a couple of episodes of ST:TNG), who is an ‘Arbitrator’ - a diplomatic mercenary. With her is her tall, cat-eyed, silent ‘Zentric’ bodyguard/assistant Jana (Marjorie Monaghan: Space Rangers).

Escaping from an attack by the Daedalus, the Osiris finds itself confronted by an entire cloaked planet in deep space, home of the Engineers, who have taken Nova because they want to re-educate her and use her vast intellect. Sorenson, Kor, Thorpe and Price are the first outsiders allowed to ‘transverse’ (transporter beam) down to the home-world of the Engineers, a race who have eliminated feelings and all concept of family. The Engineers are ruled by the Sublime Plenum, an amalgamation of their greatest ancestors’ minds and souls, which unfortunately turns out to be a really awful collection of goop and rubber tentacles. You can almost see the exact point in this production when the effects budget ran out.

Nova wants to stay but Thorpe reminds her of the meaning of family (their parents abandoned them for some reason but at least they have each other). Escaping back to the Osiris, again under attack from the Daedalus, Nova is grabbed away from the rescue team at the last minute.

The last ten minutes or so are rather complex as more aspects of the potential series are set up. Sorenson wants to rebuild the Republican Fleet but the ships he wants are on Marcab 4 which is laid waste by the Engineers. Trajan Cabel should be there too but he left years ago, opposed to the idea of a new republic, and is now calling himself ... Enoch Sean! Or Heenoc Xian... 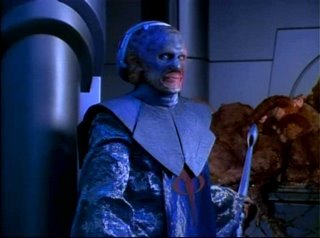 So Xian and his slimy second-in-command Valois (Philip Moon: The Young and the Restless) join forces for no very good reason with the crew of the Osiris, now captained by Thorpe, and they set off to adventures which, sadly, remain entirely unchronicled. What happens to the population of Caliban 5, deprived of what little leadership they ever had and their only means of communication with other planets, is not something that anyone seems overly concerned about.

Shot for CBS in 1996, The Osiris Chronicles seems to have remained on the shelf until it turned up on UPN in January 1998 as a TV-movie, retitled The Warlord: Battle for the Galaxy. In the UK it was released as a rental tape under its original title, with a sleeve that shows the whole crew of the Osiris - except the black guy!

Don’t be fooled by Joe Dante’s directing credit - this is strictly work-for-hire and could have been shot by anyone. The only distinctively Dante-esque element is a cameo by Dick Miller (Piranha, Gremlins, Explorers) as a peddler who sells Thorpe a ‘bio-crystal’. Screenwriter Caleb Carr’s only other produced credits are a 1991 TV movie and one of the Exorcist prequels. He’s better known for his books, notably the historical psychological thriller The Alienist. Carr and Dante were also executive producers on this pilot.

It’s not difficult to see why The Osiris Chronicles remained unchronicled. There’s no real depth to the characters and the series premise is humdrum and ill-thought-out. The Sublime Plenum aside, there are some decent effects including a few excellent mattes and some competent but unimaginative prosthetics by Steve Johnson’s XFX company. The Osiris and the Daedalus are both neat-looking ships, thanks to conceptual designer John Eaves (Star Trek), but as someone once almost said, you don’t leave a movie theatre whistling the spaceships.

There are long infodump speeches to explain to us what’s going on and the whole sketchily explored intergalactic background of a republic fallen into the dark ages is trite and clichéed, a lazy mishmash of ideas from Star Trek, Star Wars and the Foundation saga. Costumes look like they have been carefully designed to make each crew-member look distinctive, rather than being the sort of thing that such people might actually wear in their circumstances. There are action sequences that exist purely to enable the producers to tick the ‘action sequence’ box rather than making any sense within the storyline. The dialogue is largely banal. Character and planet names are yet more clichés. The whole thing is just dull and the lack of a series is no great loss to the world.

As the Osiris and Daedalus woosh off into the depths of space, one is left really not caring what happens next. Which is not good for a pilot episode...