Prey for the Beast 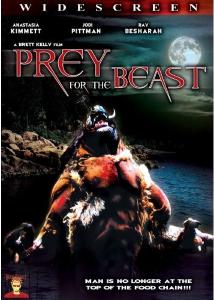 Prey for the Beast is equal parts formulaic Don’t Go In The Woods picture and good, old-fashioned monster movie of the sort that they don’t make them like any more. It is not overly burdened with characterisation or plot but makes up for this with decent acting, smart direction, a highly credible sound mix and a frankly terrific monster suit which is worth the price of admission on its own.

Four blokes go off into the woods for a weekend of male bonding to help one of their number get over his wife’s infidelity. I couldn’t actually tell you what any of their names are but there’s a tall one who is described as a ‘survivalist’ and has brought a pistol with him. Elsewhere in the woods are four young ladies (again, I couldn’t differentiate or name them although two are lesbians of course - it’s a tradition or an old charter or something). When these eight people discover each other’s existence and meet up, they also discover that there is a savage creature in the woods from which they must escape.

Actually before we get to any of this we have three earlier scenes. A pre-credits prologue has a couple (Kerri Draper and Dan Tait) in a tent getting amorous but disturbed by noises outside. She goes out to investigate then he goes to find out where she’s got to - and both meet an unpleasant end from something unseen. 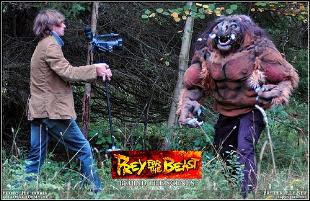 After the credits there is a sequence with an old guy who is some sort of wildlife photographer (Lenard Blackburn) and the local guide (Kevin Preece) he has employed to show him the unnamed creature - which seems to be well-known, at least to the locals. Then we see the ‘survivalist’ guy and his missus (Thea Nikolic) discussing why he has to attend this jolly boys’ outing.

Thing is, the first prologue is entirely unnecessary, serving no real purpose except to boost the running time. Yes, it introduces us to the idea that there’s a nasty something in these woods, but so does the photographer/guide scene. And those two will later connect with our main characters and influence the plot whereas the couple in the tent are entirely unconnected to the main story. You don’t need two prologues; the second renders the first redundant.

Once the octet discover that there is a beastie in the woods the plot becomes a fairly simple progression as they are killed off one by one. Unfortunately this generally happens because someone decides to wander off away from the group for no apparent reason and without telling anyone where they’re going. Only towards the end, when the numbers have been radically reduced, do we get any sense that this monster is actually hunting and killing the humans, rather than just helping itself to victims who inexplicably choose to wander around the woods on their own. 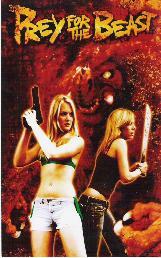 The men arrived by boat, which they didn’t bother to tie up and which has subsequently floated off. However, the ladies (and the photographer and guide) ‘hiked in’ so there should be no problem in hiking right out again. Indeed, when the survivors make it to safety (I can’t give you any spoilers here because the characters are so interchangeable that I genuinely have no idea which ones they are) we find out that they weren’t anywhere terribly inaccessible after all. After what seems a fairly short hike - even allowing for editing, it’s plainly still the same afternoon - the survivors end up on a tarmac path which leads to a car park - and quite possibly some sort of picnic area and visitor centre. It’s not as bad as the Camp Blood films and their ‘isolated’ woodland locations that are about five minutes walk from a busy main road but it certainly deflates the threat in retrospect.

While I’m picking holes, the other two major problems are that neither group of ‘campers’ seems to have much camping equipment and the locations chosen are relatively sparsely vegetated for woodland. Small trees and saplings with few leaves mean that we can see a considerable distance into the woods from any location so it’s difficult to understand how the monster is able to creep up on anyone. A chipmunk would have difficult hiding in some of this foliage.

But let’s sing the praises of the monster because this is a belter of a suit and director Brett Kelly is spot on in balancing the early scenes when we see only a claw or a flash of fur and the later scenes when we get a good (if usually brief) look at the beast. Shaggy of main, large of claw and in desperate need of a good orthodontist, this is something inbetween a bear and warthog. Actually it’s curious that no-one ever wonders whether they are dealing with a bear, especially when characters have actually seen the thing so they know it’s about eight feet tall, covered in shaggy brown hair and bipedal.

“What is it, some kind of animal?” says one character, burdened with the movie’s worst (and funniest) line of dialogue.

Because of the large number of potential victims, Kelly adds something extra to the mix by giving the creature some sort of hallucinogen in its saliva (I think) so that one of the men who gets scratched on his hand starts hallucinating (he was the cuckolded guy and we get a flashback to the discovery of his wife’s betrayal). Unfortunately there seems to be either a continuity error or some post-production rejiggery of events because his hand is bandaged (by one of the women) for no apparent reason, then later we see him with an unbandaged hand and subsequently it’s bandaged again. Even when he has the bandage on, that hand is still strong enough to grip a decent-sized automatic pistol apparently. 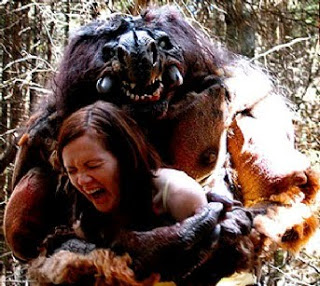 The culmination of the creature’s pursuit of its victims happens in and around a small wooden shack which the ladies say they passed on the way in but which they neglected to mention prior to that point, even though it’s full of handy, heavy, sharp tools and should have been their first thought when people started dying. It is also surprising that, given that this group have one gun (with half a dozen bullets) and one bow (with a presumably small but never specified number of arrows), no-one bothers to improvise a weapon by, say, sharpening up the end of a handy branch.

Once the survivors are besieged in the shack the interest and excitement picks up considerably, especially as one of them is hallucinating. I would have liked to see much more of this and less of people walking through the pleasant and slightly leafy woodland, presumably along a well-trodden path as they make it to the car park quite easily without the benefit of a map or compass.

Running to 75 minutes, Prey for the Beast has about eight and a half minutes of glacially slow end credits, including a reprise of all the names of its fairly large cast and its principal crew who were all introduced individually in two and a half minutes of opening titles. I’ve said it before and I’ll no doubt say it again: we don’t know who these people are so we don’t need to be introduced to them one by one. Yes, it’s a thrill at the cast and crew screening but it’s a pain in the neck for the viewers. As for the Charlesband-ian creeping credits at the end, there is no point in watching them at all. If film-makers must drag out their end credit sequences at least put something under the words (or split screen or whatever) to justify our sitting through them. A few bloopers, in the Jackie Chan style, would suffice.

The four main male characters are played by Ray Besharah, Mark Courneyea, Jodi Pittman and Kelly himself. The female quartet are played by Anastasia Kimmett, Amanda Leigh, Lisa Aitken and Sonia Myers. Many of the cast have been in other Brett Kelly movies before or since but few if any of them have done anything else on screen. In the infidelity flashback Tara Lee Gerhard appears as the chap’s wife (she also handled make-up although her surname is spelled ‘Gerhards’ there; someone else provides the character’s voice on a phone in another scene) and Jody Haucke (a Kelly regular) is the other man. 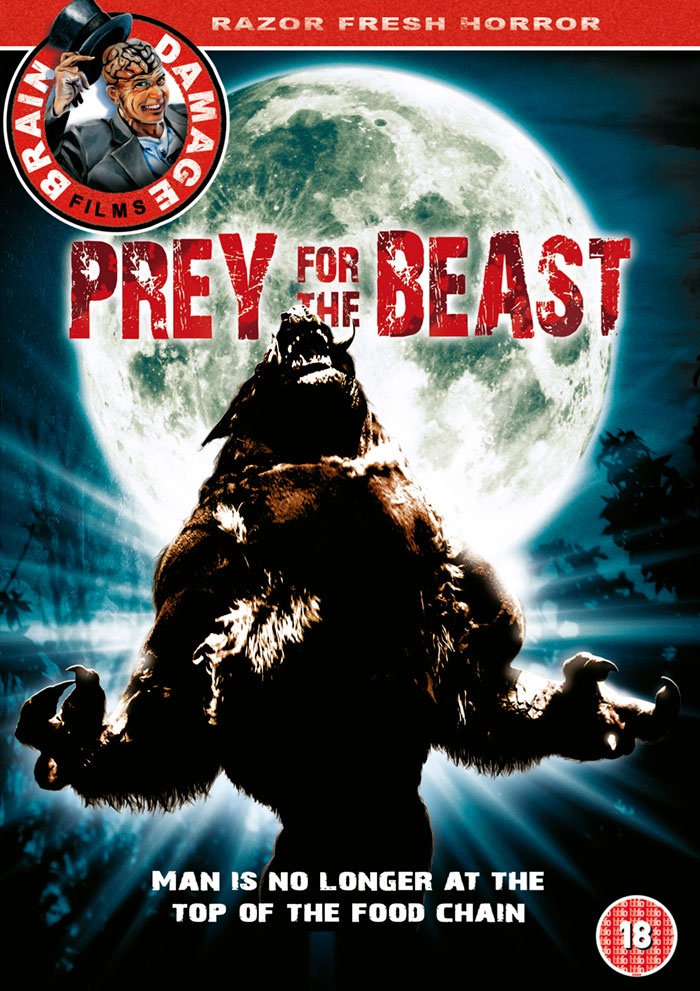 Cinematographer Jera Kenez is aka Jeremy Kennedy and has lit several other Brett Kelly pictures as well as directing the almost wordless horror short Influence; Kelly and Kenez share the editing credit.

Brett Kelly has rather cheekily bolstered the film’s credits by putting a number of friends and associates in there as fake/spoof credits. How do I know this? Because I know Brett (through Fred Olen Ray’s Retromedia forums), because he has never mentioned that he knows anyone else named ‘MJ Simpson’ and because I’m pretty damn sure that I did not work on this film as an electrician... (I also spotted ‘materials consultant’ Lou Vockell.)

Unusually director Kelly (whose previous films include The Bonesetter and sequel, the remake of Kingdom of the Vampire and a version of The Tell-Tale Heart) and writer Jeff O’Brien (Insecticidal, Alien Incursion, Bone Dry) never met during production. Having become acquainted through the aforementioned Fred Olen Ray forum, they collaborated by e-mail with O’Brien getting screenplay credit and Kelly getting ‘story by’. Still, it’s very modern, isn’t it? Both parties are evidently pleased with their joint effort (as well they might be) as they subsequently set to work on a remake of - would you believe? - Attack of the Giant Leeches. Composer Christopher Nickel had previously worked with both gentlemen on separate projects.

But the biggest plaudits here go to the make-up and effects guys. Ralph Gethings was responsible for ‘special make-up FX’ and also gets a ‘second unit DOP’ credit. He also worked for Kelly on Kingdom of the Vampire and My Dead Girlfriend and directed the short film Reckoning and here he does sterling work on the various injuries and eviscerations. 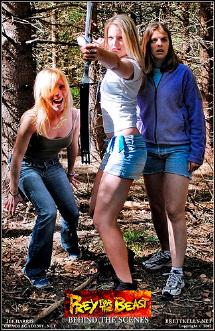 And then there’s the creature suit itself, which is the creation of Matt Ficner. Or, as the end titles have it: ‘Bruno the Beast created by and appears courtesy of Matt Ficner Productions Inc, www.mfproductions.ca.’ Ficner has really gone above and beyond the call of duty here, designing and constructing a believable, scary and practical monster suit. Ficner is also the man behind a series of short films under the self-explanatory title The Creepy Puppet Project.

Prey for the Beast is an entertaining hour and a quarter of relatively likeable (if not especially interesting) people being stalked and killed by a natural (rather than supernatural) predator. It’s a fun way to pass the time and has been put together with the skill and talent that one expects from people as experienced as Jeff O’Brien and Brett Kelly. I think it could have been more than it was with a bit more characterisation but from an action/horror point of view this ticks all the boxes and is well worth your attention.