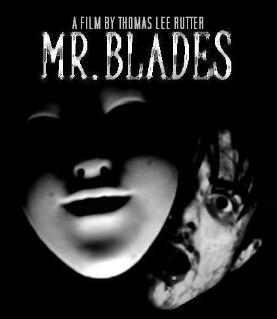 Teenage auteur Thomas Lee Rutter follows up his dirt-cheap-but-enthusiastic feature debut Full Moon Massacre with Mr Blades, arguably the first ever West Midlands giallo. And young Thomas has advanced considerably. Mr Blades has a proper script, it has proper actors (and me) and it has a genuinely impressive third act that makes this more than just a cut-price exercise in bloody make-up effects.

David J Nock (also in FMM) stars as Jeffrey Jackson who finds himself held prisoner by the mysterious Mr Blades, a phantom-like figure, dressed all in black with an expressionless white mask and a voice like Darth Vader. Most of the film is a flashback to the investigation surrounding the murder of Jeff’s girlfriend Christina (Fay Chatwin). Among those involved are Jeff’s two friends Frank and Chris (Dave Pearson and Shaun Portman), sleazy newspaper reporter Chester Marwood (William Stafford) and Detective Cameron Atkins (Leandro D’Andrea), a police officer who refuses to make compromises in either the interrogation of suspects or the brewing of tea.

As the bodies pile up, reducing the range of possible suspects by one each time, Jeff suffers from nightmare-ish visions of violence and death. Are these dreams, repressed memories or images of what might happen? Adroitly mixing well-crafted, light-hearted characterisation with impressive-for-the-budget gore effects, Rutter keeps the pace moving and delivers a thoroughly satisfying resolution.

Among the cast, D’Andrea is a stand-out as the copper and Stafford is also impressive as the nosy journo while James D Messer (Jay in Full Moon Massacre) clearly has great fun as ‘Kristof the Mortician’. The director - who also wrote, produced, edited and shot the film as well as supervising the special effects - briefly hands the camera to someone else for a few scenes as Brad Beckley, Christina’s slimy ex-boyfriend.

Since you’re no doubt wondering, I play Raymond Burns, editor of the rag for which Chester Marwood writes. I have three scenes, two with Stafford and a final one where I am supposedly collapsing from a heart attack. I supplied my own costume and cigar but I wish to emphasise the characterisation is completely original and not based on any editors for whom I have actually worked. (In fact, on reflection, I was playing J Jonah Jameson, or at least a Brummie version of him.) We shot my scenes in the library at Tom’s college where a large collection of magazines and a lightbox for viewing transparencies actually gave a reasonable impression of a newspaper office.

I also get a thank you in the credits, presumably for my review of Full Moon Massacre, alongside David DeCoteau, who has been very supportive of Tom’s work.

Mr Blades is still ultra-low budget, of course, but it’s a real step up from Full Moon Massacre and if you can overlook the semi-amateur cast and the technical limitations that come from shooting without proper lighting or sound boom, there’s a thoroughly enjoyable seventy minutes of psycho-slasher fun to be had here. Tom Rutter is learning his trade the best way there is - by actually getting out there and making movies.

The DVD, when it’s available, will also include Tom’s Lynch-ian short film A Child’s Toy. The film’s soundtrack includes songs by Weak 13, Oxzide, Dressed*as*Girl and The Violent Professionals.