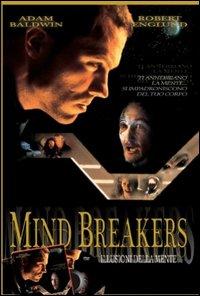 The fact that Roger Corman was executive producer of this movie should have been a warning, but even that could not prepare me for how bad Mind Breakers (aka Starquest II aka Galactic Odyssey) is. I never thought I’d say this but: this film certainly isn’t up to Corman’s usual standard.

The story concerns three couples who wake up aboard an alien spaceship, uncertain how they got there. They are married scientists Lee (Adam Baldwin: also in Corman’s 800 Leagues Down the Amazon and Sawbones, plus The Cape and Independence Day) and Susan (Kate Rodger: The Protector for Corman, plus Days of Our Lives and various Chained Heat pseudo-sequels); soldiers Devon (Duane Davis: Ghosts of Mars, Adventures of Captain Zoom in Outer Space) and Kelly (Jolie Jackunas: The Dead Next Door); plus thug Trit (kickboxing champion Jerry Trimble: Corman’s Live By the Fist, One Man Army and Stranglehold - plus Tsui Hark’s The Master!) and his girlfriend, lapdancer Jenna (Jeannie Millar: Corman’s Black Scorpion II and Ladykiller). Already aboard are Carrie (Gretchen Palmer: Black Scorpion and Alien Avengers for Corman, plus Wishmaster and Chopper Chicks in Zombie Town) and Father O’Neill (token name value Robert Englund - who previously worked with Corman on Galaxy of Terror) plus a guy whose real and character name I cannot find anywhere on the web. Oh, and someone called ‘the Indian’ who we meet just as he’s being fried by a death ray. (The thug and stripper couple are stock Corman characters, dating back as far as 1956’s Day the World Ended.) 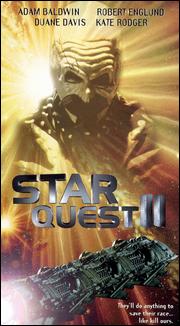 The threadbare, nonsensical, contradictory ‘plot’ which peeks out occasionally from behind several lengthy, dull, softcore sex scenes and a few quite good fights, is that the Earth has been destroyed and these six have been rescued by aliens with a view to recreating the human race. Lee and Susan were taking part in a cryogenic experiment, but it’s entirely unclear how the other four were spirited aboard. Needless to say, Father O’Neill, Carrie, the guy I don’t know his name (and presumably the Indian) are all aliens disguised as humans.

Oh, also aboard, standing in an alcove in what passes for a flight deck, is an android (again, I can’t find any ID for the actor - should have taped this) who fights anyone who tries to interfere with the ship’s controls. Yes, this falls into that extensive genre, KCMs - it’s a Kickboxing Cyborg Movie!

Now, none of this makes any sense. The only way our characters know the world was destroyed is because Lee says so - but he was in deep freeze at the time! He also recognises the type of cyborg - but what is a human cyborg doing aboard an alien spaceship? (Which also has a human computer voice and a display announcing that it’s 2041 and they are aboard the Omega-Four.) There is an attempt at story complication when it transpires that the aliens might actually want to breed humans as organ donors for their dying race, rather than any altruistic motive. This allows for dissent between Carrie and Father O’Neill but is never resolved.

A few more things at random (though this is really like shooting fish in a barrel): No-one ever questions who Father O’Neill is, though he wears no dog collar or Christian insignia. Instead, he has a white smock with a purple chevron and a weird symbol. Rather amusingly, in order to avoid getting fake blood on the purple bit of his costume in the final scene (ooh, spoiler!), he has to wear it backwards and hope no-one notices! What else? There’s a stunning piece of crap editing where a character points out that two people who died used the same last words, despite the fact that neither character actually spoke any last words! (And another character immediately points out that they said different things anyway!) Oh, I can’t go on...

But mainly this is a chance for Corman and co. to recycle footage. It should come as no surprise to anyone familiar with Corman’s recent work that the spaceship they are on is the ‘hammerhead’ ship from Battle Beyond the Stars. Just how many films has Corman used BBTS spaceship footage in? About half an hour in there is what must be the least interesting spaceship battle ever. The (mute) cyborg sits in the command chair and is intercut with shots of other BBTS ships attacking this one. There are even cutaways to the lizard-alien from BBTS and, for one unexplained shot only, to the Nestor clones!

Mind Breakers really is a greatest hits package, with dozens of clips from other Corman movies, including those which star the current cast. The first five minutes is a confused montage of almost random images, including - brilliantly - scenes of people running around inside spacecraft corridors with shots of a space shuttle! There is also a psychedelic sequence towards the end which has overtones of 2001: A Space Odyssey and means that at least one of the three titles makes some kind of sense. (In fact, since there is no actual odyssey or quest and no mind gets broken, the most accurate title is the Japanese one, Alien Snatchers, because there are actually people being snatched by aliens, as it were.) All told, I would estimate that at least a quarter of this film consists of library footage (NASA, war, riots, etc), clips from other Corman epics, and flashbacks to other bits of this film. It’s not as if it’s all even SF movies. Trimble is seen in a prison, Millar in a lapdancing club, and the introduction of the ‘organ donor’ concept prompts the computer to witter on about vivisection while showing an animal liberation scene from (I’m reasonably sure) Watchers 2. 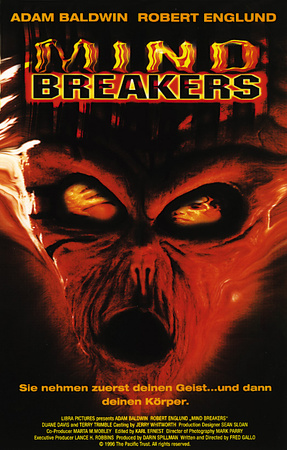 This is a staggering film, even by Corman’s usual standards. I would estimate (seriously) that it was probably shot in about five days and cost under $200,000. And it’s because these things cost so little that Corman can turn a profit on them, and as long as he can do that - he’ll continue to make them. Writer/director Gallo also worked with Corman on Dead Space, Termination Man, Dracula Rising and Black Rose of Harlem. The only other notable thing about this dreadful film is that it was an early credit for make-up effects artist Rob Hall, who later created many of the demons for Buffy and Angel.