A few weeks before the first series of Strange was due to start in May 2003, and just over a year since we first spoke about the show, Andrew Marshall gave me a few updates on how he felt the BBC’s only non-sitcom fantasy series was shaping up. 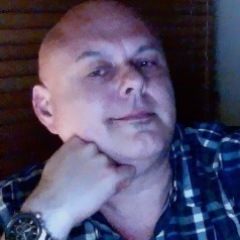 What are your thoughts on the work of Neill Gorton (visual effects) and Alan Marques (digital effects) and how well they have brought your ideas to life?
“Starting with the premise that anything is possible if you have enough money to spend on it, and the restriction that we only have a certain amount of money - only fantastic talent will yield the results. I think we are more than fortunate to have Neill and Alan as collaborators. I would like to also mentioning the other creative collaborators who make Strange what it is, namely production designer Tom Brown, photographer Paul Bond, costume designer Hazel Pethig, make-up designer Jan Sewell and composer Dan Jones. All of these people contribute to every effect you see in their own way.”

What's your favourite special effect in the series?
“It's difficult to single out any particular effect because, if they're working properly, they're totally integrated in the action, and don't really stand out as effects in themselves; for example the climax inside the bus in one episode was shot with green screen outside the windows and, as finished, simply looks like a moving bus - even though many hours of work by Alan went into it.

“Neill's prosthetics for the aged Jude in Episode One (together with Jan Sewell's special ‘aged eyes’ lenses) were utterly convincing. Sam let me touch her ‘80-year-old’ neck which even felt real. The ‘sewn together’ body which Neill made for an actor to wear in Episode Two was utterly horrifying in the flesh (or rather foam). We had an interesting debate as to whether we could show him naked - after all we'd only be showing plastic naughty bits not the real thing - but modesty prevailed on that one. And the incubi that Neill made for Episode Four were incredible little creatures; strangely, all the girls on the set wanted to be photographed cuddling one - I don't know what that tells you about our crew...

“Alan's rendition (or is it Renderman's?) of the Death Coach's arrival in Episode Three is a stunning moment, fantastically enhanced by Dan Jones' music, as are his terrifying flying scalpels in Episode Four. Often there are combinations of the two masters: Neill's ‘sword pops out of a hand’ effect with Alan's ‘glow and heat haze’ effect in Episode Two, and of course the famous ‘vampire tree’ – built by Neill, using Alan's operator-erasing tricks and an extra CGI branch.” 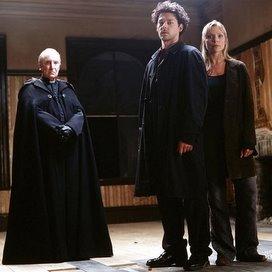 How have the performances of Richard Coyle and Samantha Janus added to and informed the characters that you created?
“It's particularly difficult for an actor to construct depth working from what are, to a certain extent, legendary characters. I think we have in Richard and Sam characterisations of great solidity and detail. There are suggestions of multifaceted people who have real feelings and different moods and thoughts from one scene to the next. Also the relationship they have created between the two main characters, being an unusual one, is delightful. Like a swan paddling beneath the surface, they both do an enormous amount of work on their personas of which you only see a small glimpse in the actual scene and I'm constantly impressed at the results.”

What are the prospects for a second series, in terms of both (a) the BBC, and (b) the characters?
“The prospect of the series continuing is, as always, in the hands of the viewing public, but I think there is a great deal left to explore.”
Posted by MJ Simpson at 18:03