I had heard bad things about Ninja Wars (aka Black Magic Wars aka Iga Ninpo-cho), but surely they were mistaken. While the word ‘ninja’ in a title doesn’t in and of itself signify an enjoyable film - and can in fact sometimes indicate absolute crap - this was a supernatural fantasy starring Sonny Chiba. Sonny Chiba! The man’s a legend!

But you know what? The word on the street was right. Ninja Wars is toss of the highest order. The plot is hopelessly confused and I’m buggered if I could follow what was happening, a situation not helped by two women who look very similar (may even have been twin sisters) having their heads cut off and then magically restored to each other’s shoulders. So is that Woman A with Woman B’s head, or Woman B with Woman A’s body? More to the point, who cares?

There’s some sort of magical aphrodisiac which the bad guy wants to create so that he can administer it to his enemy’s wife and turn her into a nymphomaniac, thus shaming her husband. Or something. And for this aphrodisiac to work it must be made from the tears of a raped virgin. Or something.

And there is a thing called ‘the Frog Kettle’ which is essential to the preparation of this aphrodisiac - a metal pot basically - though this seems to be a completely arbitrary McGuffin.

One thing I did spot is that Sonny Chiba is barely in this movie at all, and when he does turn up (as a mysterious ninja on horseback) he has a scarf over his face. He doesn’t even merit a mention in the cast list although he does receive a credit as ‘Action Co-ordinator’ - or at least, someone called Sony Chiba does! (This makes the movie's DVD release as part of 'The Sonny Chiba Collection' particularly misleading.)

I couldn’t follow who was who, what they were doing or why. And worse than that, I was bored. There’s not much action, not much magic and no tension. There’s a big set-piece halfway through when an army of monks from one temple attacks another temple mid-ceremony, burning it to the ground. I have no idea why; I couldn’t follow the reasons for this or the consequences of it and I had no idea which bunch of monks I should be cheering for during the hopelessly ill-directed fight scenes.

The dubbing is technically accurate - it matches the lip movements - which means that it is painful to listen to. Japanese is spoken in short sentences with pauses between, while English tends to be long sentences flowing into one another (unless it’s spoken by William Shatner). So the only. Way that the dialogue can. Match is. To be broken up like. This and for. Occasional. Meaningless pro. Nouncements like. But Still. 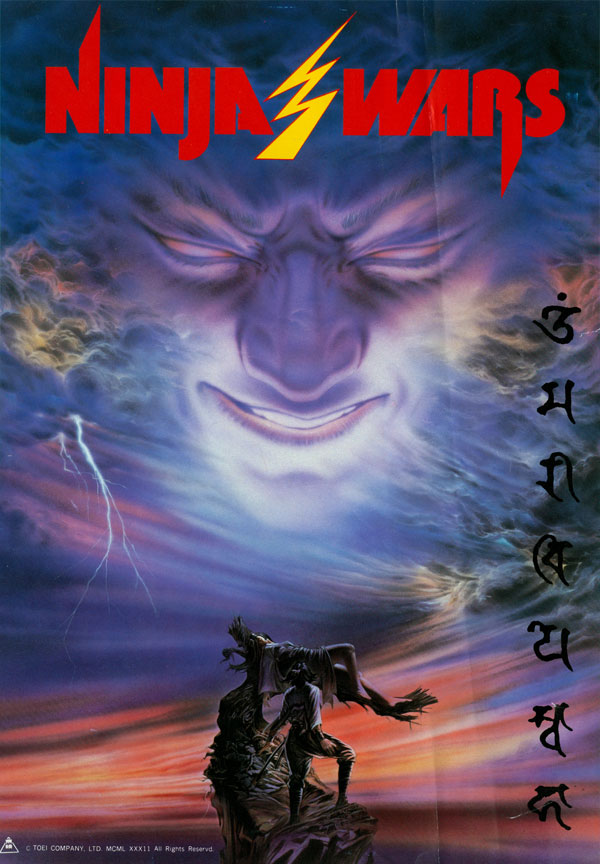 Director Mitsumasa Saito (credited as Kosei Saito on the sleeve) also directed the 1979 WW2/samurai epic Time Wars/Time Slip/GI Samurai which is high on my want-to-see list [And which I have subsequently seen - MJS], although after sitting through Ninja Wars it has slipped down a few places. Screenwriter Ei Ogawa also wrote Toho’s three western-influenced vampire films, Legacy of Dracula, Evil of Dracula and Lake of Dracula.

Among the cast are Hiroyuki Sanada - credited as Henry Sanada on screen and Duke Sanada on the sleeve - who was in Message from Space and Time Wars but is best known as Ryuji in Ring, Ring 2 and Rasen. Akira Nakao, who plays the villainous Lord Danjo, also has some genre credits: Legacy of Dracula and four Godzilla movies. Despite what the Inaccurate Movie Database claims, Jackie Chan is not in this film (or if he is, his role is even briefer and more hidden than Sonny Chiba’s...). Special effects are by Hideo Suzuki.