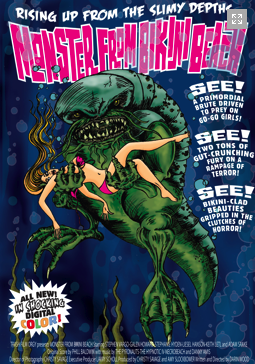 So I was very pleasantly surprised to find that this is a well-produced, professional-looking, enormously entertaining... cheesy, lo-fi, silly film. There’s nothing desperately new here; everything in Monster from Bikini Beach has been done before, sometimes better, often worse. Without ascribing specific influences, one can construct a melange such as this from easily available ingredients: a touch of Attack of the Giant Leeches here, a smidgeon of The Pink Chiquitas there...

But this isn’t a movie which claims to be the big new thing, it’s an hour and a half of fun: sexy chicks, surfin’ guitar sounds, narrating detectives and an impressive monster.

Stephen Vargo (The Final Job) stars as Sammy Payday, a bent cop with a loud shirt, a gammy knee and a 1966 Cadillac. His silent, also bent partner is Charlie Snaps (David Ainsworth, who also has several crew credits on the film) - the only man in Camaraville who owns a shirt and tie, apparently. Together they are on the trail of a supply of cocaine which has gone missing somewhere in the city, threatening an inter-gang turf war. When not running protection rackets or investigating disembowelled corpses, Payday likes to sit by the pool watching his bikini-clad squeeze Honey ‘Boom-Boom’ Stacks (Laura Stahl) go-go dancing. 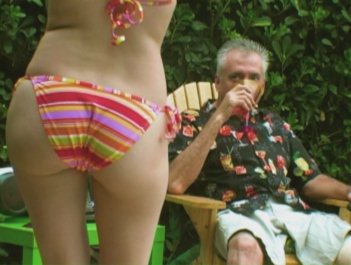 In another, overlapping plot strand, there’s a love-hate relationship between two young journalists whose paths have diverged since college. Cool geek Archie ‘Scoop’ Barclay (Galen Howard: Homeworld, Canary) is a freelance photographer, making no money but determined to uncover the truth while well-preened Raquel Vanvanderzander (Stephanie Hyden: Sukeban: Octopus Pot) is an on-screen reporter for Channel 13, selling her independent spirit for local fame and a decent wage. Archie is convinced that a putative local serial killer is actually a monster but Raquel is more sceptical: Scully to his Mulder.

The other main characters are gun-toting local catfish-tickler Noodlin’ Stu (Keith Letl) and his dynamite-toting ‘niece’ Fanny Jo (Liesel Hanson), who together play the Bert Gummer role, plus goateed entrepreneur Lonny Valente (Adam Saake) who plans to launch his new beach-front nightclub with the first ever Camaraville Midnight Gogo-a-thon.

The monster itself is never fully explained. There is a suggestion that it’s a giant catfish mutated by toxic waste and there is also talk of it having been worshipped by Indians in the area for centuries. Basically it’s a ten-foot-tall, green mouth on legs, looking not unlike the thing from The Host only vastly cheaper and less Korean. Josh Lashells is inside the suit for most shots but occasionally it’s worn by Nick Roberts or the tireless David Ainsworth.

Some people get eaten, some people get killed and lots of hot chicks and crazy guys party the night away, oblivious to the terror in their midst. But what makes the movie really work is that it is played completely straight. There are no winks to camera, no cheesy grins. Sammy Payday is a corrupt and frankly quite unpleasant character, the two young journos are sincere, Noodlin’ Stu and Fanny Jo are downhome, honest folk. People question the existence of the monster, people scream when it appears - and people’s guts get ripped out in surprisingly good (but not gratuitously unpleasant) gore scenes. Of particular note is the way that the T&A is integrated into the movie and relevant to the plot rather than the film simply stopping dead every ten minutes for a cheesecake sequence. Many film-makers could learn from this.

With a coherent plot (which is a rarity nowadays), good acting, decent camera-work, clear sound and above-average production values, Monster from Bikini Beach is the sort of film that I thought they had stopped making. And the whole thing is back with the twanging guitars of some kicking surf bands. The credits list them as Necrobeach, the Hypnotic IV, the Pyronauts, blackbird RAUM and Danny Amis with Lost Acapulco and the Mexico City Brass. Phill Baldwin provides the score inbetween surf tracks. 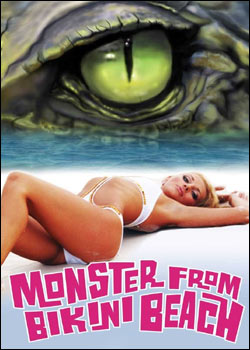 Trash Film Orgy is a festival of alternative culture held annually in Sacramento since 2000, a mix of big-screen movies, stage shows, bands, audience participation and general good-natured, tacky mayhem. It sounds freaking brilliant. In 2005, Wood and co. produced Curse of the Golden Skull, a serial starring masked wrestler ‘El Tigre Diablo’ which was screened before the movies at that year’s TFO. Stephen Vargo was in the cast of that too. Now the TFO team have put all their knowledge and experience of ‘trash cinema’ towards the task of creating their own instant cult classic and by George, I believe they may have succeeded.

There is a tremendous sense of fun and joie de vivre in Monster from Bikini Beach. For example, not content with simply listing bit parts as ‘second beach girl’ or ‘man in bar’, every character has their own very groovy name: Desdemona Nova, Retro-Chic Monique, Pinky Moldanato and White Pants Dutch. Even among the crew, the fun continues. What other movie can boast such enviable jobs as ‘break-away bikini-top technicians’, ‘psychedelic naked girl painters’ or a ‘director of nonsense’?

Enormously entertaining but made with a professionalism that demonstrates a true understanding of what makes B-movies great, this is a film you shouldn’t miss.