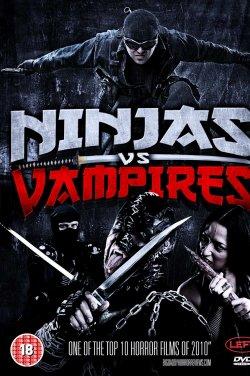 Ninjas vs Vampires is a curiously bipolar film. Parts of it are absolutely superb and others are distinctly sub-par. But I believe that the former considerably outweigh the latter and so am happy to recommend it.

This is actually the sequel to an earlier film, Ninjas vs Zombies, which has not been released in the UK to date, but that’s not a huge problem. There are parts of this film which clearly refer to the first one, such as discussion of another ninja named Fitz who died, and these might be confusing without this knowledge, but it doesn’t seriously impact on the movie’s plot.

But here’s what’s odd. What Ninjas vs Vampires lacks in plot, it more than makes up for in characterisation. A combination of excellent acting, finely wrought dialogue and good direction creates, from the ninja team and the young couple, six thoroughly believable, sympathetic, rounded, coherent characters. There’s a quite magnificent scene near the start where Aaron (Jay Saunders) visits Alex (Devon Marie Burt: Ghosts Don’t Exist) who had disappeared in a puff of smoke with the ninjas after the initial brouhaha. He finds her at home, not only with no memory of the vampire attack and ninja rescue but unable to mentally process what Aaron is saying. If he mentions vampires or ninjas she hears him but instantly forgets what he has just said. This is a brilliantly scripted, brilliantly acted, brilliantly directed sequence, one of the very best individual scenes I’ve seen in a low-budget indie for quite some time. 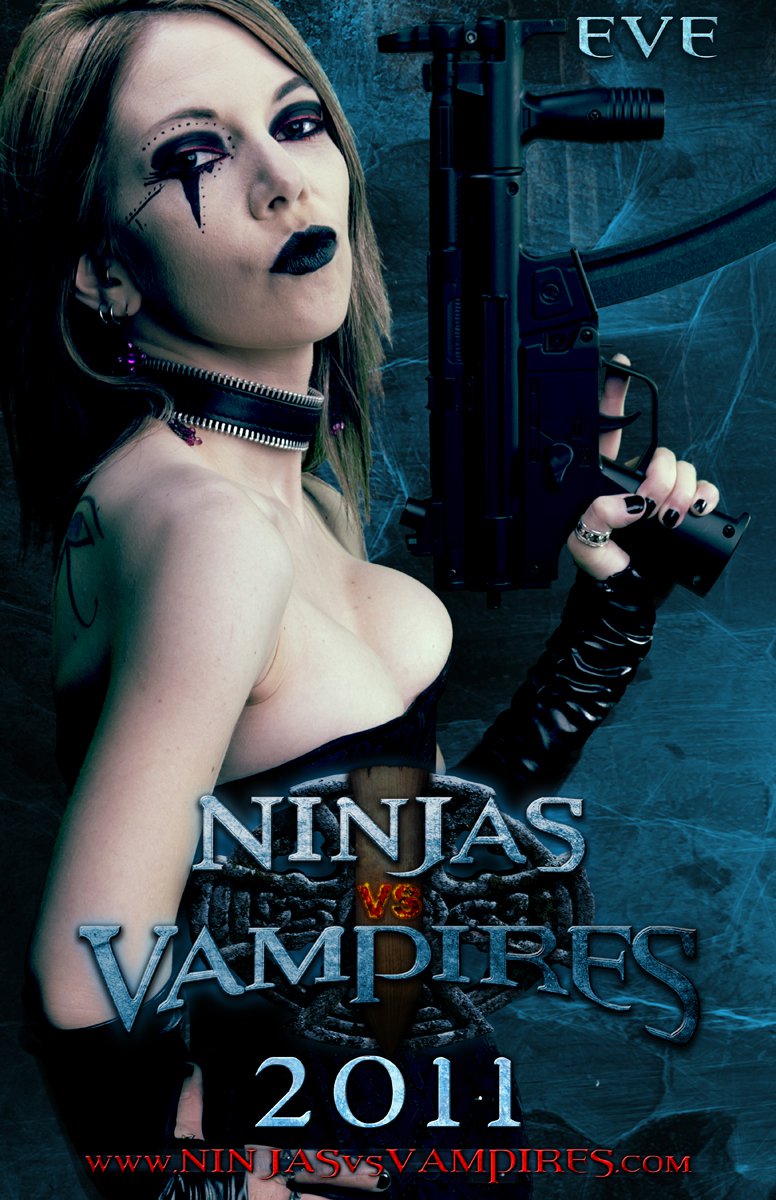 The ninjas themselves are a bit tricky to grasp at first, not least because one them, a goth chick named Lily (Carla Okouchi) is also a vampire. Apparently she’s a good vampire because she only drinks the blood of other (bad) vampires, never human blood. Oh, and also none of these ‘ninjas’ are Asian. In fact, come to think of it, there isn’t a single non-white person in the entire film.

The other three ninjas are bald Cole (Cory Okouchi - honesty, he’s not Asian), the nominal leader of the group; blonde chick Ann (Melissa McConnell) who is a witch (and Fitz’ widow); and Kyle (Daniel Ross, whose previous horror credits include Vampire Sisters and, wow, a 2007 feature-length version of EF Benson’s Mrs Amworth!), a great character who mixes dry, witty, cynical-but-upbeat humour with just the right amount of comic book references (“I thought you were going to go all Dark Phoenix on me,” he tells Ann at one point.). The ‘ninjas’ appellation means that the team (“There is no team,” says Cole, “We’re not the X-Men.” to which Kyle responds “But you do kinda look like Professor X.”) - means that the team dress in black, use oriental weapons and do occasional martial arts moves. Except for Lily who mostly just bites people and Ann who casts spells, mostly using a purple crystal which the vampires steal.

So really this isn’t ninjas vs vampires, it’s ninjas, a witch and a vampire vs some other vampires.

What we’re not told (and maybe we were in the first film, I don’t know) is who these ninjas are, where they come from, how they know each other, why they have taken on the responsibility (if they’re not ‘the X-Men’) of battling zombie hordes and vampire clans, The individual characters are fully realised, the team dynamic is glossed over.

On the other side of the coin are the vampires, who are equally unexplained but also suffer by being mostly very poorly defined characters. Sharply dressed lead vampire Seth (Kurt Skarstedt - would you believe, a 2011 remake of Plan 9?) is just awful, a lethal combination of terrible dialogue woodenly recited by an actor constructed from MDF. Most of the rest aren’t much better, including ‘The Bishop’ (PJ Megaw) who wears a metal mask and some sort of lame vampire double act wearing fancy dress hats. One of only two interesting and well-presented characters among the bloodsuckers is Seth’s brother Manson (Daniel Mascarello) who is kept chained in the dungeon for some reason and wear a crudely stitched together leather outfit that makes him look like Michelle Pfeiffer in Batman Returns (“Big Tim Burton fan, huh?” quips Kyle). The other is Lorna who is Seth’s main squeeze, an impish sex pixie wonderfully played by petite Elizabeth Taylor who looks like a 12-year-old Zoe Wanamaker. 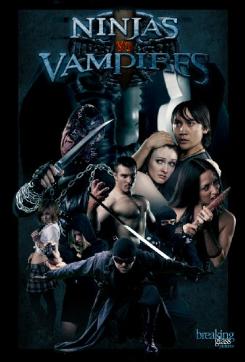 The fights between the two groups are as diametrtic as any other aspect of the film. Mad mêlées like the first action sequence are just impossible to follow, not least because everyone wears black. There look to be some neat moves and groovy dismemberment effects in there but constant fast-paced editing means there’s no time to appreciate any of them. In fact that first fight is really quite comprehensively poor because how is an audience to follow what’s going on if a bunch of unidentified, black-clad vampires are attacked by a bunch of unidentified black-clad people, one of whom is a vampire. At night.

On the flip-side, any time we get a one-on-one fight, when the director is patient enough to let us see (a) what’s happening and (b) who’s involved, it’s terrific. There’s a particularly good training session when first Kyle then Cole take wannabe ninja Aaron through his paces which benefits from careful editing, fine choreography (by Megaw and Mascarello) and not taking place in the dark.

Naturally much of the action does take place at night and, even measured against the low quality that is implicit in the phrase ‘day for night’, the cinematography is bad. It’s not much better in the daylight, to be honest. There’s a particularly silly scene when the ninjas, sure they are safe from vampires during daylight, are attacked by bloodsuckers who use the cunning trick of holding blankets over their heads as they run from the car to the house. Really? Would that work? Is it that easy? So basically all that any nightstalker needs, to become a day-walker, is a large enough umbrella?

But in contrast (again!) to the often poor visual quality, the sound is great. A good range of music mixed at just the right level so it complements what’s on screen instead of dominating it. And I love the little ‘snikt’ sound effect every time a vampire extends their retractable fangs.

So a film of two halves then. Well, a film of about eight halves, really. However, the parts that are good are hugely impressive and enjoyable, and the lesser aspects not excruciatingly awful, so the balance is very much on the positive side. It’s great fun and these are characters (especially Kyle and Aaron) whom we really want to spend time with. 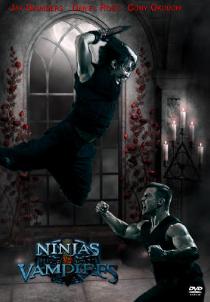 Writer/director/DP/editor/composer/tea-boy Justin Timpane is the main creative force behind both Ninjas vs pictures and also appears on screen as a beatnik named Reefer who helps Aaron find the ninjas in the first place. In interviews Timpane has stated that he prefers people to watch ...Vampires first then see ...Zombies as a prequel. There is also a Ninjas vs comic-book spin-off, discussed in a featurette on the DVD (check out the publisher; imagine a goatee and pony-tail on him...).

The film concludes with a Halloween-set epilogue that sets up a mooted third picture, Ninjas vs Monsters. There’s a very different alternative ending included on the UK DVD (from Left Films) along with deleted/extended scenes, bloopers, a couple of music videos, the UK trailer and a choice of three commentaries.