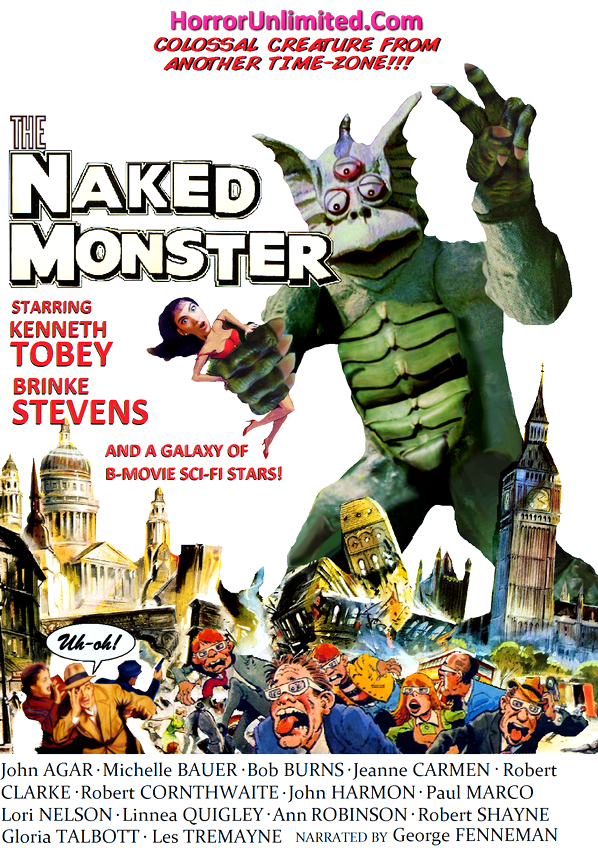 The Naked Monster is a film that took 21 years to make and cost almost as many dollars. It is both an homage to, and a spoof of, 1950s sci-fi and horror movies which goes beyond anything that could be called ‘affectionate’, stopping only slight short of stalkerdom. The film has been carefully constructed to give the impression that it has been cobbled together using two VHS machines, a stopwatch and the complete literary works of Bill Warren. But is it just an impression?

It’s not so much the story that matters here: the story is a by-the-numbers account of a giant ‘monstersaurus erectus’ terrorising California by stomping around goofily and occasionally treading on or eating people. The script of The Naked Monster is basically what you would get if you threw every monster movie plot filmed between 1955 and 1965 into a blender, then scooped out 90 minutes’ worth and baked at gas mark seven. No, what matters here is how the film has been made.

Like some mad DJ mixing and scratching old records, Ted Newsom has ‘sampled’ a pile of old movies to create something new. Then, in among the clips - all from trailers or public domain titles - he has woven a central storyline in which a local sheriff (RG Wilson), a federal agent (John Goodwin, also in Dr Horror’s Erotic House of Idiots and Tremors) and a paleo-ichthyologist with a talent for pouring great cups of coffee (Brinke Stevens: Hell Asylum, Invisible Mom, Witchouse 3 and, oh, everything pretty much) attempt to deal with the giant, three-eyed beastie of the title. They are assisted by receptionist Connie (Cathy Cahn: Dr Hackenstein) and by one of the few people on the planet with experience of defeating monsters, Colonel Patrick Hendry (the late great Kenneth Tobey, reprising his character from The Thing).

And therein lies the central conceit of Newsom’s hugely entertaining film. Anyone can edit together clips from old movies (though few would have the detailed knowledge, patient precision or lack of a social life required to do it as well as Ted manages) but that’s just an extended montage until you add actors. Not just any old actors, but the actors who were in those very films - as the characters they played, 40 or 50 years on.

Thus we have Robert Cornthwaite as Dr Carrington from The Thing, John Agar and Lori Nelson as Dr Clete Ferguson and Helen Dobson from Revenge of the Creature, Ann Robinson and Les Tremayne as Dr Sylvia Van Buren and General Mann from The War of the Worlds, Paul Marco as his Ed Wood character Kelton the Cop, Robert Clarke as Major Allison from Beyond the Time Barrier, Dragnet announcer George Fenneman (who was also in The Thing) as the narrator, and John Harmon and Jeanne Carmen from The Monster of Piedras Blancas.

In a cast which simply staggers belief, we also find cameos by the likes of Linnea Quigley, Michelle Bauer, Gloria Talbott, Bob Burns (both in and out of his Tracy the Gorilla costume), Ron Ford (miming to ‘Fa-Ro-Lee, Fa-Ro-La’ from Frankenstein Meets the Wolf Man!), producer JR Bookwalter (The Dead Next Door), screenwriters Sean O’Bannon (Hybrid, Final Examination) and Pete Atkins (Hellraiser II, III and IV), journalists Bill Warren and Stuart Galbraith IV, Simpsons writer Mike Reiss and the ubiquitous Forry Ackerman as ‘Flustered Man’, possibly his finest ever performance: “You should build a robot double of the monster, and it could perhaps do some sort of erotic dance...”.

Very few of the actors actually appear on screen with anyone else, but that’s part of the fun, resulting in a hilarious sequence where an appeal for help is put out on TV and a whole bunch of monster veterans telephone the Sheriff’s office to offer advice based on their own screen experience. And just in case you’re not sure who anyone is, there is usually a model, mask or poster in the background to clue you in.

Combining the main cast of Tobey, Stevens et al, the seemingly endless cameos and the innumerable film clips, Newsom has created a film which zings with corny gags like some sort of feature-length Goon Show. He knows that it’s not enough to have the clips, the old-time stars and an entirely gratuitous sequence of Brinke Stevens in the shower (which, with the addition of one line, is even more gratuitously repeated among the ‘deleted scenes’). Ted knows that you need a laff-a-minute script, careful direction and above all precise editing. Having written, directed and produced numerous horror movie documentaries including Ed Wood: Look Back in Angora and Flesh and Blood: The Hammer Heritage of Horror (Peter Cushing’s last ever work), Ted Newsom is well-placed to know what clips to use, where to find them and how to combine them for the best effect.

The Naked Monster is a sort of last hurrah in many ways. It was the last film role for Tobey who died in December 2002. Agar, Tremayne, Cornthwaite, Fenneman and Talbott also all died before the film was completed (and Marco has passed away in the year or so since then). This stands as a warm tribute to each and every one of them.

The DVD has a director’s commentary, several deleted scenes (including a lengthy spoof of Titanic which was, I think, wisely cut), a stills gallery and an archive interview with Kenneth Tobey.