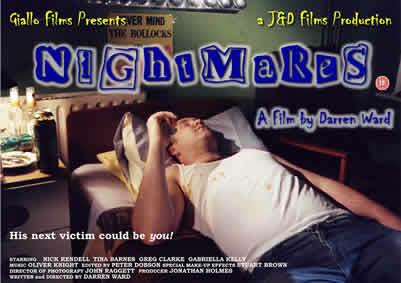 Darren Ward’s Nightmares is an eleven-minute study of a serial killer who is haunted - not literally - by the ghosts of his victims. It’s nicely produced and has imaginative, well-done special effects, but... well, it just doesn’t really go anywhere.

Nick Rendell (who was in Ward’s Three Tickets to Hell and Sudden Fury) plays the nameless lead character, addressing the camera in a series of soliloquies in his dingy flat as distorted figures of angry victims wander aimlessly around him. We are shown two flashbacks to specific killings and a third, as an epilogue, which is without context. We are not told the extent of his crimes but there are other, unidentified ‘ghosts', notably a couple who repeatedly chastise him with the phrase “eight years old.”

There is no suggestion, either from the character or the script, that these are in any way genuine supernatural manifestations. They are externalisations of his thoughts, just as much as the way he talks directly to camera is not meant to be literal, merely a cinematic device. The problem is that, in our brief visit to this man, we really don’t find out anything about him other than that he has killed some people. He seems to be neither afraid of the ‘ghosts’ nor angry about them, just mildly irritated by the inconvenience of having glowing figures wandering past his bed, endlessly repeating “eight years old.”

Character studies of serial killers are nothing new but features such as The Last Horror Movie or Henry: Portrait of a Serial Killer give us enough time to get to know our protagonist and try to understand why he does what he does. Nightmares just doesn’t give us a chance. Is this man a sadist? Is he an emotionless automaton? Is he driven by fear, power, doubt, thrills? All we get is: hello, I’m a bloke who kills people and then they haunt my flat in a figurative way; here I am killing someone and someone else and someone else. There’s no beginning, no ending and not much middle and it’s frustrating because this is a very well-produced, professional-looking little film and you want to know more about this man.

There is a throwaway comment near the end which is something about violence being all around us but this feels tacked-on and frankly, so what? Lorries are all around us too and you are far more likely to be killed by one of them than by a serial killer. There is also mention of a rough childhood with his sister the favoured child but this doesn’t illuminate the character in any way.

Now here’s the biggest problem that I have with Nightmares. This character is described in the publicity as a serial killer - but he plainly isn’t. He may be a multiple murderer but that’s not the same thing. The first murder we see is a contract killing, shooting a stranger for £7,000 - so that makes him a hit-man. The second flashback shows him burgling a house to raise money to buy drugs; disturbed by the householder (Tina Barnes: Hellbreeder, Darkhunters), he rapes her (without removing his overalls!) and then stabs her. So that makes him a violent junkie and a thief. The third murder, of a girl on a dark street, is (as previously mentioned) devoid of context.

The blurb on the Giallo Films website says: “His victims random. His motive ... insanity.” - which is just completely contradicted by what we see on screen. Neither of the first two victims are random and the motive in both cases is money. Is he an amoral serial killer, an immoral thug or a professional hit-man (who may be immoral or amoral, depending on whether he enjoys his work)? The point is: one can be amoral or immoral but not both. (I also have difficult accepting that a hit-man who charges seven grand for an assassination would also be a junkie who breaks into houses to feed his addiction. Opportunistically raping and murdering people while burgling their houses is the sort of crime that would have you ID-ed and banged up in Wormwood Scrubs long before you could build up any sort of reputation as an anonymous contract killer.)

To be blunt, it seems that Nightmares has been built around the concept of a murderer who still sees his victims in his mind and the rather dandy special effect that portrays this. What has been skimmed over, and it’s rather important, is who this chap actually is and what he does. I don’t know whether there’s a legal definition of a serial killer but the literary/cinematic convention is that it is someone who deliberately sets out to commit a series of motiveless murders of strangers. Whether driven by lust, boredom, curiosity, religious fervour or whatever, this is completely different from contract killings or burglaries gone wrong.

Henry, Max Parry, Hannibal Lecter - these are not people you can pay to take out your love rival, nor would they ever be driven to break into a house and pinch the video to feed their cocaine habit. And I believe I’m correct in saying that nor would the Dennis Nielsens, Ed Geins and Harold Shipmans of this world. The unnamed guy in Nightmares just isn’t believable. We only have ten minutes or so to get to know him so to tell us things that are contradictory leaves the audience nowhere. Not only do we not know why he does what he does, we don’t even know what it is he does. It’s a fundamental problem which spoils what could have been a smart little character piece.

Technically, you can’t really fault the film. The cinematography by John Raggett (Nature Morte, The Witches Hammer, Forest of the Damned) and the editing by Pete Dobson (Sudden Fury, Hellbreeder) are both top-notch. But the script simply goes nowhere and does nothing and that’s a big disappointment.