Robert Pratten’s second feature arrives five years after his impressive debut London Voodoo (I received a screener of this in November 2007 but it has a 2008 copyright date). MindFlesh is a more complicated and esoteric film that its predecessor; it is billed as a ‘Cronenberg-style horror thriller’ and it certainly falls into the ‘body-horror’ subgenre with which the Canadian director is most closely associated.

But this is a British film, about a London cab-driver named Chris (whose license, in an irrelevant but fun touch, is due to expire on Halloween). Driving around London late at night, Chris (Peter Bramhill: LovecraCked! The Movie) has frequently seen a mysterious woman - the statuesque Carole Derrien (Nature Morte) - by the side of the road and has in fact become slightly obsessed with finding out who she is, to the extent of keeping a log book of ‘sightings’ and plotting them on a map on his wall.

Among his associates are another cab driver who suspects his girlfriend is cheating on him, an aggressive bloke who likes to hang out at lapdancing clubs, and Chris’ ex, a conceptual artist with whom he remains on friendly terms. Over the course of the film, Chris’ relationship with the woman develops in intriguing and frankly disturbing ways. He starts seeing her in his flat and they actually begin a relationship, although she still has a tendency to not be there when he turns round. Gradually, she becomes not only more permanently corporeal but also the dominant sexual partner.

However Chris has also been seeing something distinctly less attractive than the shapely form of Ms Derrien - a grotesque monster which we never see clearly (although you can see a maquette and the suit under construction in photos on this page). This is a being from another dimension (I think) and its message to Chris is that he must face his hidden fears otherwise all his friends will die.

Now this is where the film lost me. The creature is clearly presenting Chris with a warning of danger, not a threat of violence, but I couldn’t understand why these people would die if Chris didn’t uncover his repressed childhood trauma. Nor, for that matter, could I determine the connection - if any - between the monster and the lady. I can only assume that she is also from another dimension but whether she is working with or against the monster, that passed me by. 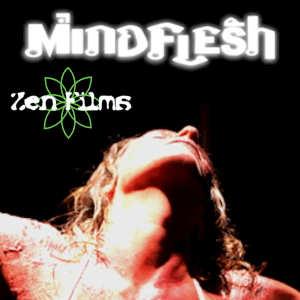 MindFlesh is based on a novel, White Light by William Scheinman, and on the printed page there would be much more room to explore what was going on. Conflating that into an hour and a half, much of which is tautly edited scenes with little dialogue, leaves the viewer admiring the style, the atmosphere, the imagery - but confused about the actual plot. There must be some reason why Chris has to face his trauma, some reason why this is important to the creature and some reason why his friends will die if he doesn’t, but it all comes across as an arbitrary McGuffin and in a film like this (bearing in mind also Rob’s excellent first movie) I just can’t believe that it’s arbitrary, yet I can’t discern the rationale.

Although a plot such as this might seem ripe for a Final Destination-style race against time with characters meeting gruesome ends, in fact there’s very little death in MindFlesh. Chris, who has been having flashbacks to his childhood and his relationship with his mother, does eventually uncover and face the traumatic memory which he has kept hidden and even in today’s cynical world it’s a shocking one. But how does that set things right in this dimension and wherever the monster and/or woman come from?

Christopher Fairbank (Moxy from Auf Wiedersehen Pet, who was also in Alien3, The Fifth Element and The Bunker) turns up as an author/professor who has some idea what’s going on and wants Chris to keep away from him, but he doesn’t impart this crucial information to the audience, leaving us aware that something bad is happening but unsure what or why.

Maybe it’s just coincidence or perhaps Carole Derrien picks films like this deliberately, but Mindflesh confused me as much as Nature Morte did, and is certainly as stylish as that film although thematically there’s no connection between the two. As with Paul Burrows’ thriller, I just let the cinematic style wash over me and didn’t worry about figuring out the substance of the actual plot. What else could I do?

For the record, here’s the mini-synopsis from the film’s website: “Chris Jackson is a gateway for obsessions to pass from the mind to the physical world. To close the gateway he must face his childhood trauma before everyone he knows is killed by extraterrestrials.” As you can see, that doesn’t help much. Here’s the one on the promo postcard that accompanied the screener: “Mindflesh tells the story of a taxi driver, Chris Jackson, whose obsession with a supernatural goddess becomes real. Add cruel extraterrestrials that punish Jackson for pulling the goddess from a parallel dimension and Mindflesh establishes what could be a very successful franchise in the tradition of David Cronenberg.”

The references to the Canadian ‘body horror’ director are valid, incidentally, as Chris is also noticing strange fleshy protuberances on his stomach which come and go, but these are not explained any more than the woman, the monster or any of the rest of the weird things which happen to the luckless cabbie.

Mindflesh is a very different film to London Voodoo without being a significant departure for Rob Pratten, if that makes sense. If you enjoyed the first film for its story and characters, Mindflesh may disappoint you. If you enjoyed the presentation, the photography, the music, the mise-en-scene, the direction, the design - well, then you may enjoy Mindflesh just as much or even more.

This is not an easy film to watch so if you’re looking for a fun monster flick, look elsewhere. But if you want a movie that will make you think, make you wonder and make you argue with other people over what it’s actually about, try Mindflesh.