Ladies and gentleman, charge your glasses. The toast is: Penetration Angst, a work of unparalleled brilliance which is, without a doubt, not only one of the most entertaining British films which I have seen for a long time, but indubitably the weirdest.

Coming from Salvation, and with a sleeve emblazoned with the catchy copy line ‘DEATH SEX!!’, I wasn’t sure what to expect here. Death, yes; sex, of course - but I was surprised to find myself laughing out loud at an extremely black comedy. Penetration Angst is one part Evil Clutch, one part Pussy Talk, one part I Spit on Your Grave - with a side-order of Tod Browning’s Freaks and a dash of Little Shop of Horrors.

Helen (Fiona Horsey) is a virgin, unable to face having sex since the time when, as a nine-year-old, she walked in on her mum indulging in a very violent BDSM session. When her slimy boyfriend Jack (Phil Hayden) rapes her, something very odd happens. At the moment of orgasm, Jack ... well, he disappears. Apparently up Helen’s vagina. All that’s left is a pile of his clothes. Understandably worried, she goes to see a gynaecologist (James Crichton) and when he rapes her too, the same thing happens to him. The one person who doesn’t want to rape her, or even have consensual sex with her, is drippy Dennis (Paul Conway: The Last Horror Movie) who carries a torch for her.

Helen runs away from the home she shares with her creepy, voyeuristic stepdad (Jon Hurn: The Zombie Diaries), whose confinement to a wheelchair doesn’t stop him groping her, and a few months later she’s working the streets of London as a whore. The tricks she turns help to satisfy her vagina - which not only causes her stabbing pains but can be vaguely heard to plead, “Feed me!” - and she lives off the money left in their wallets after they disappear ‘up there.’ Dennis is in London too but he passes her by without recognising her. For the middle act of the film, their stories run in parallel.

About 25 minutes in (and here’s something I never thought I would write) this film about a man-eating, talking vagina becomes significantly weirder with the introduction of conjoined twins. Attached side-by-side the length of their torso - four breasts, four legs, two arms, and yes we do get to see them naked and it’s an impressive bit of make-up from Paul Hyett (I Zombie, The Descent) - the sisters could not be more different. Sonia (Beth Steel) likes drinking in pubs, picking up men, having a laugh; Sylvia (Amy Steel) is quiet, bookish (we see her reading James Herbert’s Once), interested in art - and a virgin. Dennis and Sylvia become an item, to Sonia’s derision, but it all goes horribly wrong during a frankly hilarious love-making scene which culminates in copious quantities of blood.

Dennis and Helen have now swapped lives: he is a wanted criminal, walking the streets, while she finds happiness - although there’s one thing she won’t let her husband do. Then in the third act, the film becomes a British crime caper, as Dennis hitches up with stripper Pinky (Jaye Macauley) to pull a bank job on the Isle of Wight. Helen and her new husband are honeymooning on the island, and the two couple’s paths cross in a strange, deadly - and extremely funny - way.

There’s a crazy mishmash of ideas here but an excellent script somehow holds them all together. A movie just about a killer vagina could be pretty boring, but a roster of increasingly unpleasant and/or bizarre characters keeps things interesting and lively. Much of the black humour is extremely inventive and clever, one of the highlights being a gross-out scene when a man’s tongue is stretched to ten times its normal length. Performances from the largely neophyte cast are generally good, especially the wickedly funny Sweet sisters, and the camerawork is excellent (cinematographer Uwe Bohrer shot Jorg Buttgereit’s infamous Nekromantik!).

Where has Penetration Angst come from? Wolfgang Büld has apparently been making films, occasionally in Britain, since the late 1970s, and this was shot in London and on the Isle of Wight in late 2002. But with little advance publicity or word of mouth, this is one of those films that seems to have sprung fully-formed from its creator’s forehead - so let me be the first to recommend this truly extraordinary movie to you. It’s not the searing gothic fetish psychodrama that a glance at the packaging might suggest, but a hilarious horror-fantasy-crime-farce like you’ve never seen before, featuring blood, sex, violence, sleaze, a sunburnt penis and a rabbit who is more significant than you might expect. Watch it and be amazed. 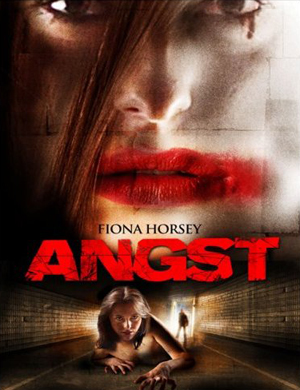 (Salvation’s DVD includes a trailer, a stills gallery and some behind-the-scenes footage, but these didn’t work properly on my review copy which also froze when it reached the end credits. This is a shame as apparently the behind-the-scenes stuff includes a hilarious meeting between the film crew and Nigel Mansell.)

Addendum: Since I originally wrote this review, I have been very pleased to help orchestrate the UK theatrical premiere of Penetration Angst at Leicester Phoenix Arts, which was attended by the director and some of the cast. Wolfgang Büld subsequently directed two further terrific slices of darkly comic, off-beat cinema, with some of the same cast and crew: Lovesick: Sick Love and Twisted Sisters. Penetration Angst was retitled Angst when it was eventually released in the USA.
Posted by MJ Simpson at 20:37