The best ever British film never released in Britain, Project Assassin is a stunning piece of ultra-low-budget film-making which propelled the Hurst brothers into careers on international productions working with big-name stars. This is a remarkable debut, but unless you live in Germany, you’ve probably never even heard of it.

A prologue set on 25th December 1972 sees a baby born in a laboratory; the birth complete, the restrained, screaming mother (Rose Mathews) is shot at point blank range and the baby is injected with... something.

But Christian is not all that he seems. He is being monitored by the mysterious Dr Waltham (Robert Hill) and his assistant Richard (Chris Orr, who played several roles in a stage production of Frankenstein the following year). Christian, who was evidently the baby born in the prologue, is referred to as ‘the weapon’ and Ellis is ‘the primary target.’

The next day, two policeman call, leading to indignation about ‘rights’ from the pompous Jack and a frantic flushing away of evidence by George. But it’s not drugs they’re looking for, they just take a polaroid of Christian that Jack took and then destroy the camera. They don’t want any evidence that he is there. What is going on? That night, as Christian undergoes some sort of fit, Jack goes into sympathetic spasms and starts haemorrhaging from every orifice. The next morning Jack has gone - and so has all his stuff...

Waltham has the house not only under surveillance but fully bugged with both audio and video equipment. Some scenes, such as the one where the housemates debate what has happened to Jack, are shown split-screen, shot from up to four ‘hidden camera’ angles, predating similar techniques in movies like My Little Eye by more than five years. 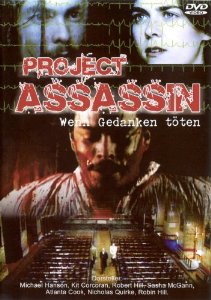 The housemates and anyone else who visits the squat are, one by one, killed or abducted by mysterious figures, all working for whatever shady government organisation is headed by Waltham. Eventually Ellis goes on the run, leading to a terrifically original chase scene set in a bus garage, but he is cornered and taken to the underground base of the ‘Eugenics Division’.

Christian, it seems, is carrying a genetically engineered virus which can kill by telepathy; the virus has become self-aware and wants Ellis as its new host. Waltham and co have complete control of the media and the film climaxes with Jack broadcasting surveillance footage from the house to try and convince the public about what’s going on. There is a whole religious subtext to Christian - his name, his birthdate, even his hair and beard - but I’m not entirely sure what the implication is, unless it’s just emphasising the apocalyptic nature of the virus if it gets out of control.

Believe it or not, this entire 90-minute movie was shot on Betacam for only £4,000. The producers took it to Cannes where it was picked up by Marco Weber, an associate of Roland Emmerich on movies like The Thirteenth Floor. He spent a quarter of a million dollars on a state-of-the-art tape-to-film transfer and gave it a theatrical release in Germany, where it has since been released on VHS and DVD, variously subtitled as Project Assassin: Der Gedankenkiller (‘the thought-killer’) and Project Assassin: Wenn Gedanken Toten (‘when thoughts kill’).

Andy Hurst followed Project Assassin with the thriller You’re Dead starring John Hurt and Rhys Ifans which had a UK theatrical release in 1998. He was cinematographer on a 1999 documentary about Michael Reeves and wrote a screenplay called The Glades which has been filmed and released as a fake sequel to the 1998 Denise Richards/Neve Campbell movie Wild Things. Most recently he wrote Earthquake for one-word-will-do producers Nu Image (Spiders, Octopus). As well as writing, directing and producing, he also acted as cinematographer on Project Assassin, using coloured lighting and filters to help disguise the tiny budget. Though the constant use of red and blue is perhaps slightly overdone - at times it’s like watching a tinted silent movie! - nevertheless it’s effective and skilfully managed. In fact all the camerawork is of a very high quality. 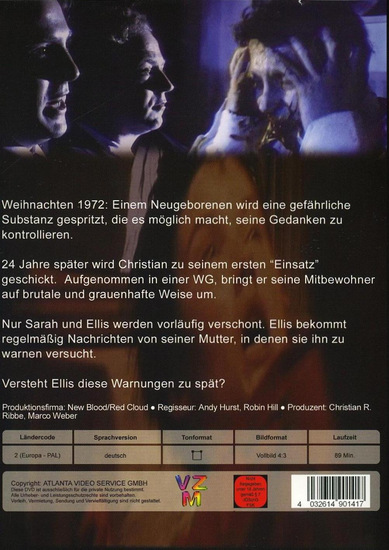 Hurst’s brother Mike - credited here as Michael Hanson - went on to direct second unit on You’re Dead and wrote and directed the thrillers New Blood (with John Hurt and Carrie-Ann Moss) and Babyjuice Express before returning to horror with House of the Dead II and Pumpkinhead IV; he also got the unusual credit of 'script polisher' on The Pool. Fight choreography is by John Carrigan (recently seen in the interactive DVD Advanced Warriors) and Glen Salvage (Left for Dead). Special make-up effects are credited to Chris Archimedas.

Though you will need to spend some Euros to get a copy, Project Assassin is thoroughly recommended - it’s a thrilling, imaginative, original, blood-spattered SF-horror thriller. What a damning indictment of the British cinema industry that although we can make superb movies like this, we can’t find any way of letting people in this country see them.