Missile to the Moon 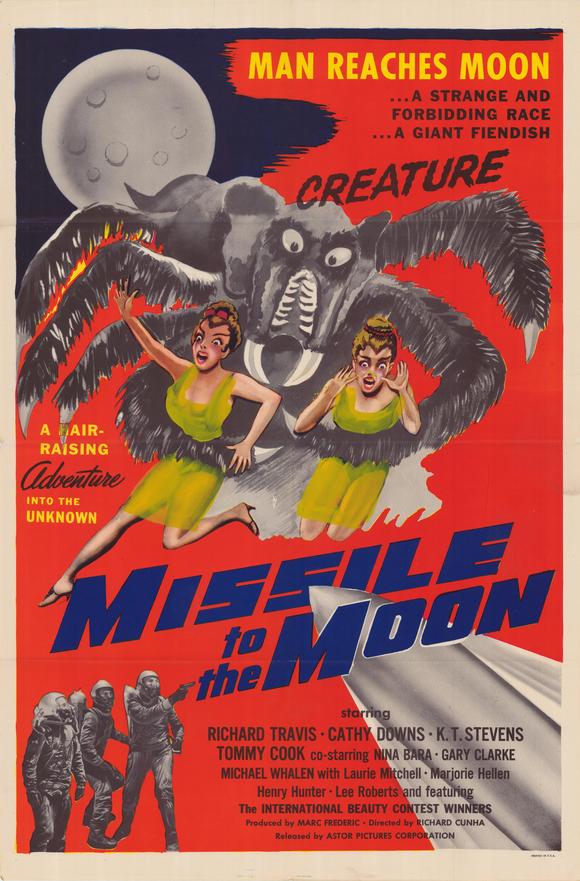 Produced a year or so after Sputnik but a couple of years before Gagarin, Missile to the Moon opened in theatres two months after the Russian Luna 2 probe became the first manmade object to reach the Moon. So either its timing was perfect or it was rushed through production. Possibly both.

Richard Travis (Mesa of Lost Women) stars as Steve Dayton, who has been helping rocketry engineer Dirk Green (Michael Whalen - The Phantom from 10,000 Leagues - in possibly the worst toupee ever seen in a sci-fi movie) with a project to design, build and test a manned space rocket capable of reaching the Moon. On an evening when a senior military officer (Henry Hunter: Secret Agent X-9) has called to tell them that private space exploration is not allowed and the government will be taking over the project from now on, they are also visited by the local sheriff (Lee Roberts, topping off a career consisting of about a hundred westerns) out hunting for two escaped convicts.

Young, blond Lon (Gary Clarke: the teenage werewolf in How to Make a Monster) is a good guy who was six months away from release and regrets the robbery which landed him inside; short, pugnacious Gary (cartoon voice artist Tommy Cook - the character is identified as 'Gene Fennell' on the Inaccurate Movie Database for some reason) persuaded Lon to join his breakout and they are now hiding in the rocket. Searching the launch site with the sheriff, Dirk spots the two escapees but doesn't alert the law, although he does lock them inside. He later returns and asks them to help him launch the 'missile', which obviously doesn't require a great deal of training. Just before blast-off (stock footage of a captured V2 being tested by NASA, which looks nothing at all like the model rocket seen through the window of Dirk's office), Steve and his fiancee June (Cathy Downs: The Phantom from 10,000 Leagues, The She-Creature, The Amazing Colossal Man) climb aboard to find out what is going on. 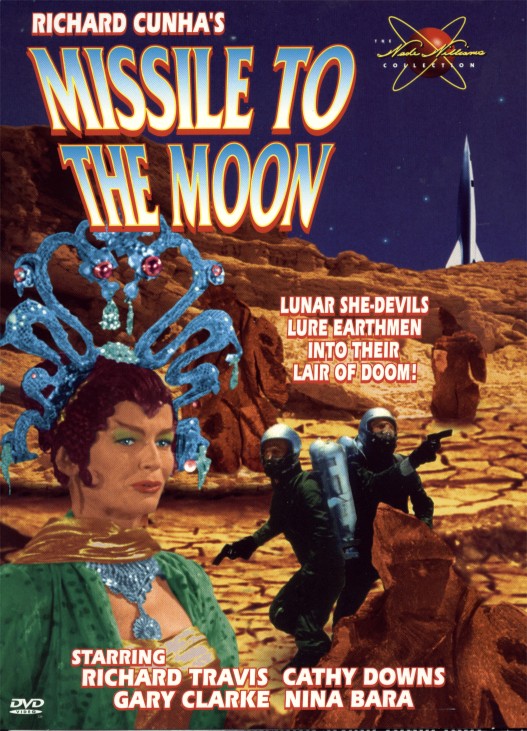 The surprisingly swift journey through space sees Gary making a crude play for June and Dirk being fatally injured by a falling battery during a meteor storm. Just before breathing his last, he says something which sounds like 'leader' and gives Steve a medallion containing a big diamond while exhorting him to make sure the rocket lands in the location for which all the controls have been set.

This turns out to be Bronson Canyon, home to 90 per cent of all sci-fi movies, horror pictures and westerns ever filmed in Hollywood.

The quartet go exploring and encounter some absolutely hilarious rubber-suited 'rock-men' from whom they escape, though it is not clear in what way the aliens present a threat. They move at the glacial speed of the average mummy and seem entirely devoid of claws, jaws, weapons or anything else dangerous. The costumes are basically large, squarish chunks with slots to create arms and legs and while that is quite a neat design idea - standing still each rock-man becomes a seemingly solid slab - it is also really, really unthreatening. I don't like to mock low-budget special effects, so I will instead extend plaudits to whoever was inside these costumes and discovered a way to walk in them without falling over. Escaping into a cave, the gang discover that there is oxygen aplenty (somehow) and remove their aviators' face-masks.

At this point the film lurches into one of those tiny sub-subgenres that we all know and love: the matriarchal space-babe society. As far as I know, said subgenre consists of this film, Cat-Women from the Moon and Zsa-Zsa vamping it up in Queen of Outer Space. There are about a dozen or so hottish chicks living on the Moon, lead by a leader named the Lido (daytime soap regular KT Stevens) - which is what Dirk was saying before he died. Three others are named: scheming Alpha (Nina Bara: Tonga in Space Patrol, who, like several others in this cast, seems to have given up acting after this film, and you can understand why), gentle Zema (Marjorie Hellen: The Giant Spider Invasion, The Manchurian Candidate) and got-a-few-lines Lambda (Laurie Mitchell: Attack of the Puppet People, Queen of Outer Space). 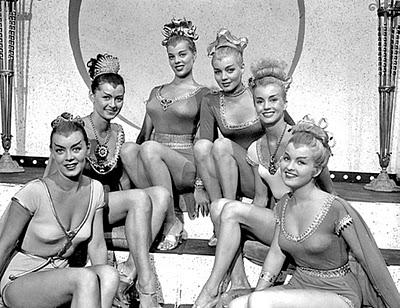 All the others are played by beauty queens from the USA or abroad, including two girls who were also in Queen of Outer Space the same year, playing such similar non-speaking roles that it was hardly worth their getting changed. Remarkably, every one of these ladies seems to have accrued at least a few other credits: others were in The Ghost of Dragstrip Hollow, The Giant Gila Monster, Dr Goldfoot and the Bikini Machine, Abbott and Costello Go to Mars and episodes of Burke's Law and The Beverley Hillbillies.

Well, it seems that old Dirk was actually the Lido's husband and constructed his rocket-ship not to explore the Moon but to get back to his Missus. However, as none of the Moon-babes recall much about what he looked like and Steve now wears that diamond medallion, he is assumed to be Dirk. There is a network of caves beyond the women's exotically decorated rooms in which can be found lots of huge diamonds and a giant spider-thing played by a giant spider-thing-puppet.

Long story short, Alpha murders the Lido, proclaims herself the new Lido and arranges to 'marry' Steve (who, they have determined, isn't really Dirk). The women all have some sort of psychic power so that whatever the Lido says, all the others have to accept and obey, even if it basically boils down to: "I'm the new Lido and I didn't kill the old Lido who is lying here next to the throne with a dagger sticking out from between her shoulder blades." There are also some weird little bombs and a vague plan to leave the Moon and colonise Earth. 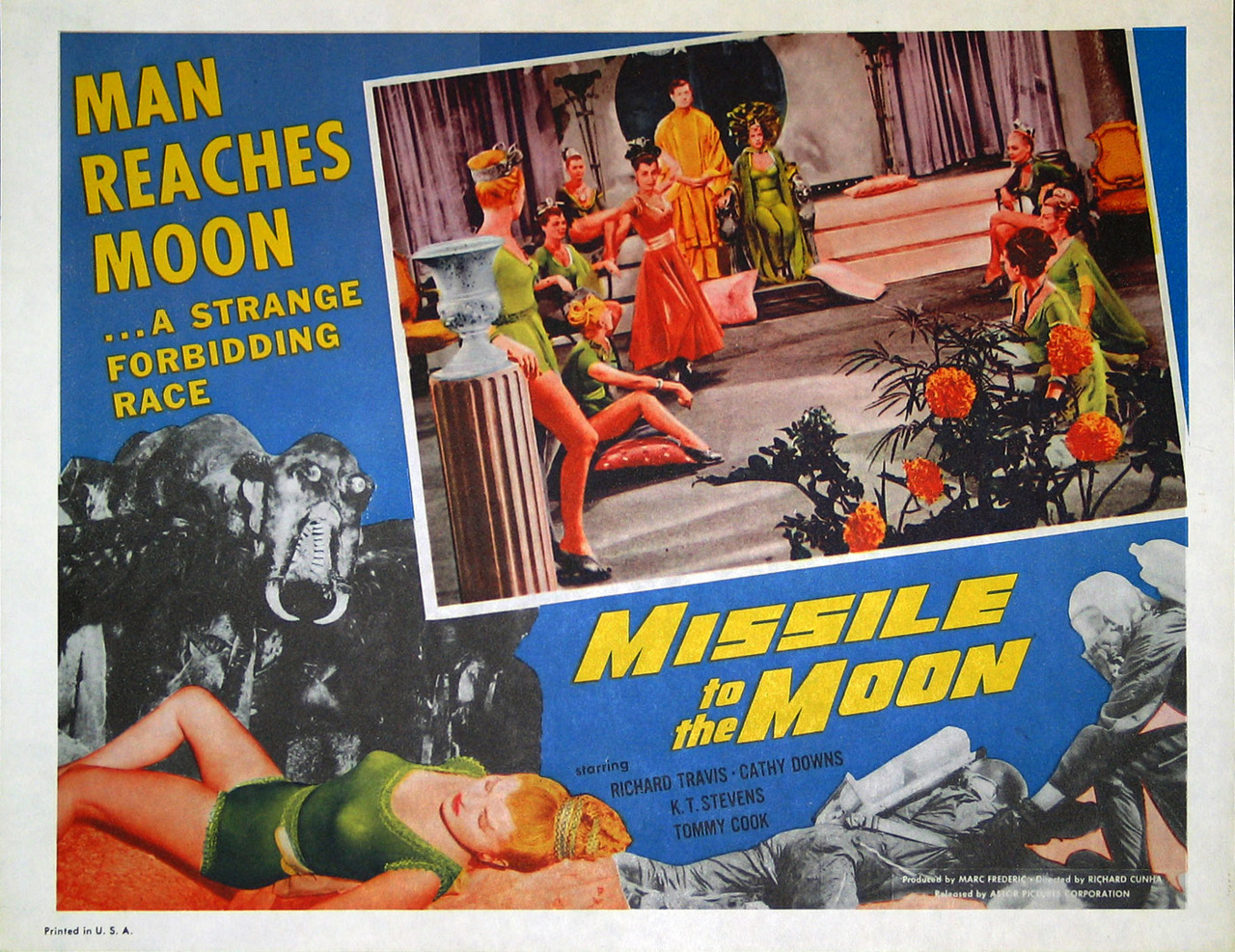 Good old Zema, who has rather fallen for Lon (and he for her) helps the two ex-cons to escape then blows up the throne room, bringing Steve out of his Alpha-induced trance but leaving herself trapped under the wreckage. The three lads rescue June from where she has been shackled up as a Kong-style offering to the giant spider-thing and head off back to the ship. Unfortunately for avaricious Gary, who is lagging behind the others, carrying two heavy bags of oversized diamonds, he gets cornered by a couple of rock-men. Backing away from them, he steps into direct sunlight which, as we all know, is far more deadly on the Moon than it is on Earth. Before you can say 'Dracula' his space-suit burns away leaving only a skeleton.

Steve, June and Lon make it back to the rocket-ship which successfully blasts off by superimposing that old V2 footage over a shot of Bronson Canyon and hoping nobody will notice the launch gantry. There is some desperately weak, sexist joke at the end that seems to have been tacked on to satisfy some sort of union regulation, and then it just stops.

Director Richard E Cunha had a brief but notable career. After learning his trade as a newsreel cameraman for the US Air Force he shot some largely forgotten TV shows before lunging into fantastique movies in partnership with producer Marc Frederic. Together they made Giant from the Unknown, She Demons, Frankenstein's Daughter and this picture - all within about a year of each other! Cunha shot a couple more non-genre pictures before disappearing.

Cinematographer Meredith Nicholson (who also lit The Amazing Transparent Man) went on to a busy TV career, working on such memorable shows as M*A*S*H, Batman, The Invaders and Mork and Mindy. Special effects are credited to Ira Anderson whose career extended from Rocky Jones, Space Ranger through a brace of Tarzan pictures to the likes of The Deep and Damien: Omen II.

Missile to the Moon is cheesy 1950s B-movie sci-fi at not only its cheesiest but also its B-movie-ist and frankly its 1950s-ist. It stems from an age when the idea of launching things into space had become viable but was still sufficiently outrageous that any old nonsense could be applied to it. And an age when having the Moon populated by a dozen young ladies, a bunch of sentient rocks and a single giant spider-thing was a cinematic possibility. Bless it. 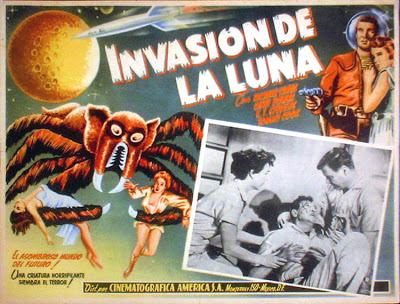 The version on this triple bill DVD is very odd. The first reel (a reel is about twenty minutes long) is a lovely crisp image with only a few minor scratches, but the first few minutes of the second reel are not just scratchy but tatty, with both image and sound jumping and massive gashes appearing on screen. After that, the print is all over the place, sometimes too dark, sometimes heavily scratched, sometimes completely out of focus! And yet sometimes nice and crisp and clear again. I've never seen anything like it.