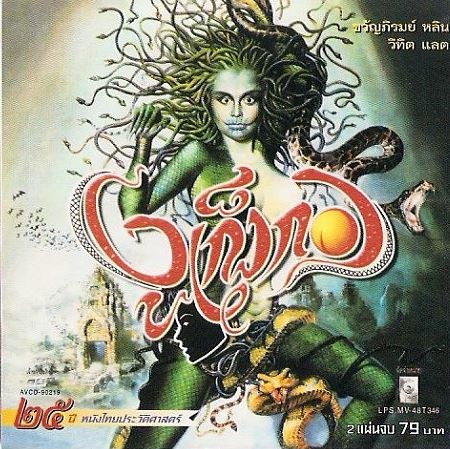 In the jungles of South East Asia, a group of hunters are trampling through the undergrowth in pursuit of a large snake, but a young village woman hides the serpent behind her basket and misdirects the hunters when they come looking for it. Returning home, she falls into a river and is saved from drowning - by the snake.

So begins this entry in the surprisingly extensive snake-woman sub-genre of Asian horror movies. Unfortunately the version I’ve got is in Thai and has no subtitles, so I will struggle through the plot as best I can.

The young woman (I don’t know any character names but we’ll call her Anna for convenience) lives in a hut in a village, where she takes in washing. One night she is visited at night by the great snake, which magically transforms into a handsome young man and makes love to her. Nine months later, heavily pregnant Anna is ostracised and criticised by her neighbours for being a single mother. She gives birth alone, in the jungle, in a torrential downpour. At first she fears that the baby is dead and covers it with broad leaves, but she hears a cry and takes her daughter home with her. 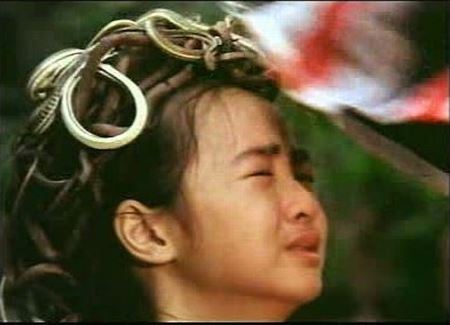 Several years on, we meet the daughter (let’s call her May) as a happy child playing with the other village kids, but something strange happens to her head. Unwrapping the girl’s headscarf, her playmates find that her hair is a mass of snakes and run screaming to their parents. Anna and May prepare to flee the village but before they can leave, a mob of angry villagers - carrying flaming torches in the grand tradition of horror movie angry mobs - surround their grass hut and set light to it. As the girl and her mother huddle together in terror, the heavens open and a sudden rainstorm douses the flames.

Anna and May move into a cave outside the village, and we jump ahead another ten years or so - May is now a gorgeous young woman with a propensity for sexy sarongs and leopard-skin bikinis (actually it looks more like civet-skin, but you get the picture).

Two scientists (let’s call them Fred and Joe) are out capturing lizards for study when Joe catches sight of May in the jungle and is instantly smitten. Later that night, Joe and Fred are attending some sort of festivity where an extravagantly dressed, jewel-draped entertainer sings... ‘Hava Nagila’! Joe spots May on the edge of the clearing and follows her, but is bitten by a snake in the jungle. May sucks out the poison and they’re in love. 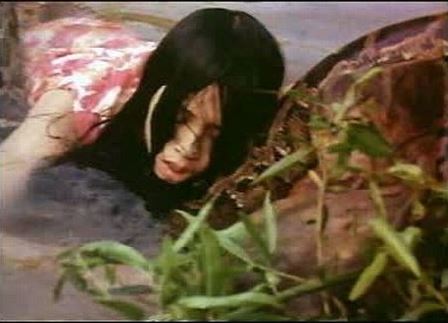 At this point, the film turns into a completely different movie as we meet various gangsters, starting with a drugs deal which ends in a shoot-out between rival gangs. The movie gets very talky from here on in, so the plot is necessarily more vague.

Joe and May are now living in quite a nice house on the edge of town. Joe runs afoul of the gangsters and is beaten up but escapes. As he runs through the jungle, he is recaptured but May tries to save him. With Joe unconscious on the ground, one gangster attempts to rape May but she spits a small poisonous snake out of her mouth into his face. The other hoods run away in fear but one of them is brought down by a group of cobras which appear in their path.

It’s clear that the gangsters have a hold on the entire community, but the final straw is when three of them encounter Anna, washing clothes down at the river. She tries to run but is grabbed and has her head smashed on a rock. When May finds her mother’s body, she swears revenge using all the supernatural powers at her disposal.

Cue the finale, in which May transforms into a full-on snake woman, as depicted on the VCD inlay, with a full body-paint make-up job of serpentine scales. Her hair is again a mass of snakes, and there is another mass of coils around her hips to preserve the actress’ modesty. The effects budget doesn’t extend to making any of these snakes actually move, but it is still a pretty impressive sight. And in any case, there are plenty of real snakes on show. 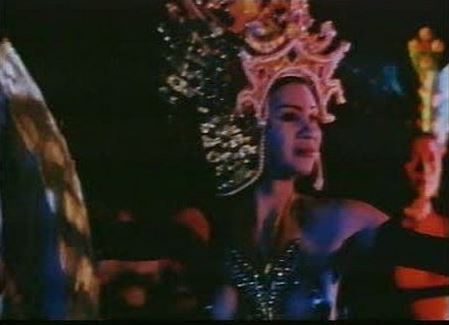 May uses her mastery over snakes to summon dozens, maybe hundreds of the things, of all sizes and species. They swarm into the gangsters’ house and one by one the terrified bad guys fall prey to their attack. The villains are dead, Anna’s death is avenged, the local people are safe from the criminals - May and Joe live happily ever after.

Ngoo Keng Kong (aka Devil Medusa) is a surprisingly well-made film. Despite the rigidity of the snakes attached to May (as both adult and young girl) there’s enough of them that the appearance is pretty scary - though not as scary as the vast numbers of real snakes on show. All the animals - except those actually growing out of May - appear to be very real and very much alive, and all the actors interact with them on screen, especially the actress who plays Anna, who has to lie down and let a large python crawl all over her. There is very little by way of gore - mostly people are just seen screaming as a snake winds round them - and no sex or nudity.

The cinematography is extremely good, with rich blue shades in the many night time scenes, skilful photography of the fire attack on the grass hut, and other very credible uses of coloured lighting. The direction is slick, and the acting seems good. The only descents into comedy are ‘Hava Nagila’ (are these Jewish villagers?) and a speeded-up shot of Joe pulling his trousers on as he runs from a snake, following his first night with May. 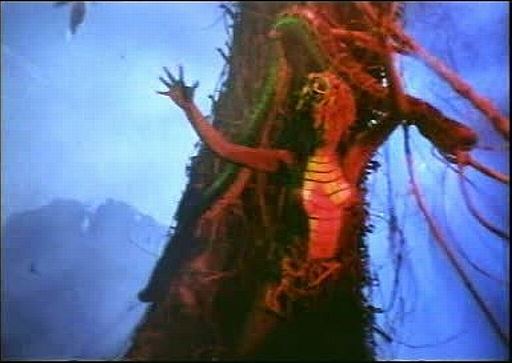 So what is this film? What can we find out about it? Answers: dunno and not much. I thought at first that I might have bought the acclaimed 2001 Cambodian-Thai co-production Snaker, which is widely available on VCD. The original title of that film is Kuon Puos Keng Kang (‘The Snake King’s Child’) but I have also seen it on dealer’s lists as Ngu Geng Gong. However, I have tracked down some frame-grabs from Snaker [And in fact I’ve seen it since I wrote this review - MJS] and this very definitely isn’t it.

The story of the snake woman seems to be common currency throughout the region; The Illuminated Lantern website has some information on other Asian snake woman films.

Assuming that the various synopses/reviews which I’ve found are correct, I can definitely state that this film is not any of the following: The Snake Girl, Snake Girl Drops In, The Snake Woman, Nagin, Devi, Naag Shakti, Valetina, Hungry Snake Woman, The Snake Queen, Green Snake, Phantom of Snake, Sex Medusa, Love of the White Snake, Killer Snakes, Lady Master Snake/Snake Woman’s Marriage, Madame White Snake, Blood Snake Human Devil, Snake Devil, Snake Devil Woman, Snake Charmer, Calamity of Snake or The Ugetsu Story. The closest I’ve found so far is a 1970 Hong Kong/Philippines production called Devil Woman; the plot summary in Pete Tombs’ book Mondo Macabro has some similar elements to Ngoo Keng Kong - birth in a rainstorm, gang of toughs - but too many differences. So it’s not that either. 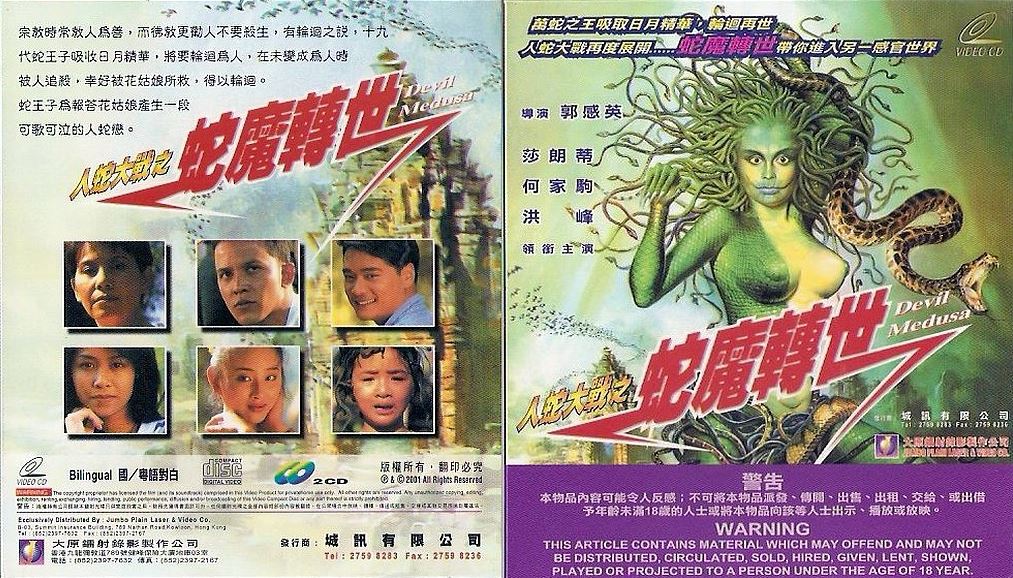 So it looks like I’ve got yet another First English Language Review. My disc is on the Solar label, catalogue number SZVCD 0027 - but there’s not one other word of English anywhere on the packaging or print. The disc itself is not great: the print is quite scratchy in some places and the image is very pixilated - even by VCD standards - in fast-moving scenes. Withid Ladd was also in the awful ghost movie Hunch.

Nevertheless, should you have a chance to see Ngoo Keng Kong, you should certainly take it. It’s a well-made film and an interesting example of the prolific Asian snake-woman subgenre.

Addendum: After I first posted this review, the Marketing Department at Solar very kindly replied to my enquiry about this film, providing me with the names of the director and lead actors, and also a translation of the title: ‘ngoo’ means ‘snake’ and ‘keng kong’ is, I’m told, a species of snake.
Posted by MJ Simpson at 21:11