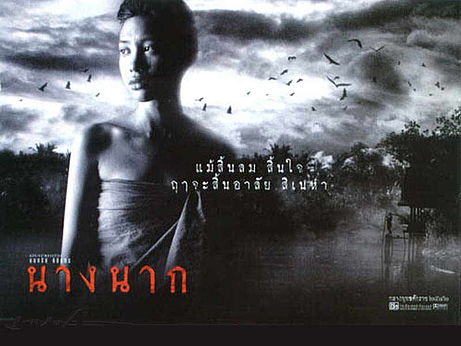 I had heard good things about Nang Nak: I knew it had won some prizes and I was very impressed with Nonzee Nimibutr’s contribution to Three, so this was a film I went looking for.

The story, based on an ancient Thai legend, is very simple. Mak (Thai heartthrob Winai Kraibutr: Snaker, Krai Thong, The Hotel!, Kaew Kon Lek) and Nak (19-year-old Indhira Jaroenpura) are a young couple, split up when Nak is called up to fight in a war. He is almost killed but nursed back to health by monks. Nak was pregnant when her husband left and she gives birth while he is away, not knowing whether he is alive or dead, but she has sworn to wait for him.

Eventually, Mak returns to their little house beside the river, away from the village and there is a tearful reunion with his wife and their baby Dang. But why do the villagers, including his best friend Um (Pracha Thawongfla), shun Mak? The answer, as shown in a flashback, is that on the stormy night when Nak went into labour, she died. Nak and Dang are both ghosts.

This is a heart-wrenchingly sad and romantic, as well as occasionally scary, movie. Nak has no reason to think that his beautiful wife is anything other than normal, and he rejects attempts by Um and others to persuade him that he is living with ghosts. Nak is feared throughout the village and people are dying through her supernatural intervention. One group wants to burn her house down, while others are bringing in an exorcist (rather unfortunately called a ‘ghost banister’ in the generally okay subtitles - that could be a corruption of ‘ghost banisher’ or ‘ghostbuster’!). 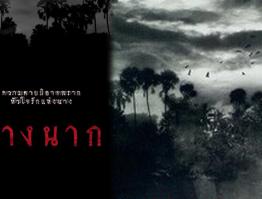 But Nak isn’t evil, just dead. She has sworn to stay with her husband and her only crimes are loyalty and love that reach from beyond the grave. The film culminates not in the usual magical battle between good and evil but in a goodbye scene between two tragic lovers, just as it started, but with even less hope of salvation. Along the way, there are some horrific images, from the mutilated bodies of Mak’s regiment to a desiccated old woman’s body being eaten by lizards. One of the few major special effects sequences is a dream when Mak sees his comrade Prig crumble and die, which only just works, suggesting that Nimibutr was well-advised to concentrate on horror that emanates from character and situation.

On the basis of this and Three, there’s no doubt in my mind that Nimibutr is the hottest Thai director at the moment, especially as he was also producer of Tears of the Black Tiger, the first populaist Thai film to get UK theatrical distribution since, well, probably ever. What is particularly gratifying is that his work is true to its origins. He’s not imitating western or Japanese cinema but making genuinely Thai films that explore the feelings and fears of people living in the Thai countryside. The forests and rivers of Thailand are as much a part of his work as the people. The limited settings of this film don’t give cinematographer Nattawut Kittikhun much of a chance to shine however, although the night-time scenes are well handled.

Unfortunately this Hong Kong VCD (in Thai with Chinese and English subs) is lousy quality, an overly dark transfer with far, far more and worse artefecting than I have ever seen on a disc before, which distracts from the film. Maybe I should have invested in the DVD. The work of production designer Ek Eiamchurn (who conceived the story with Nimibutr and scriptwriter Wisid Sartsanatieng) and art directors Akkadej Kaewhod and Ratchanon Kayunngan is severely hampered by the poor image quality, although Pakawat Waiwittaya and Chatchai Pongprapapun’s evocative music is unaffected.

The biggest loss however is a crucial scene when Mak sees his wife reach through the floorboards of their house-on-stilts, stretching her arm to retrieve something several feet below, which finally proves to her horrified husband that she is a supernatural entity. I only know this scene is included because other reviews mention it. On the Ocean Shores VCD it’s completely impossible to tell what Mak is looking at. 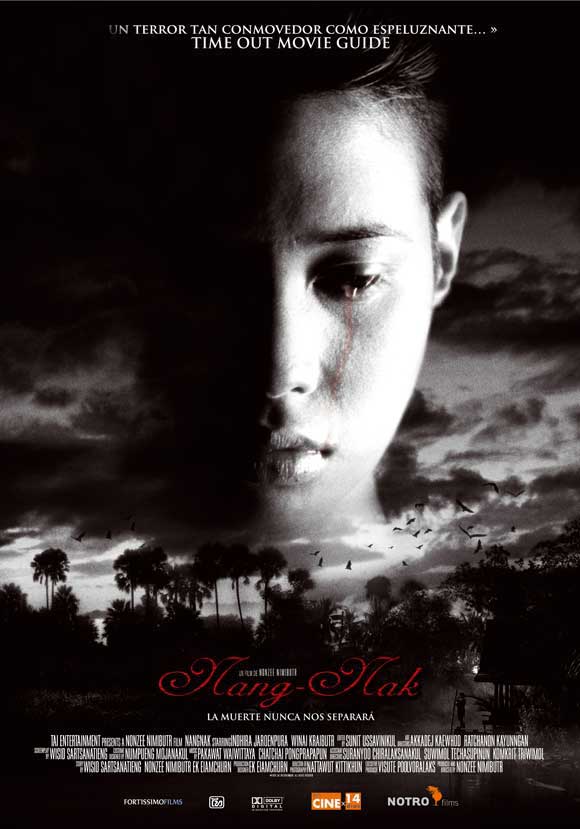 There is a movie called Nang Nak Part 2, as yet unavailable with subtitles, but it seems to have no direct connection with this one. Unfortunately the website at www.nangnak.com appears to have been taken down but the Thailand Life website has some useful info about the legend which has been filmed more than twenty times. Nonzee Nimibutr’s version was a massive domestic hit, grossing more at the Thai box office than Titanic, and has been rightly compared to The Sixth Sense in terms of not just its serious, thoughtful, character-led approach to horror but also its enormous success with both audiences and critics. Nang Nak won four awards at the Asia-Pacific Film Festival; Nimibutr took home the Golden Elephant from the Bangkok Film Festival as well as scooping a prize at Rotterdam.

So - who is Nonzee Nimibutr? Born in 1962, he was raised by his grandmother after his parents abandoned him. When he was 17 his mother re-entered his life and told him to become an engineer but instead he studied Audiovisual Communication at the University of Silpakorn alongside Wisid Sartsanatieng (aka Wisit Satsanatieng) with whom he would later collaborate. Nimibutr made his name as a director of TV ads and music videos, working for a company called Music Train for four years before founding his own company, Buddy Film and Video Productions in 1988. To date he has directed more than 180 commercials and more than 70 videos.

In 1997 he moved into feature directing with 2499 Anthaphan Khrong Mueang (various spellings exist!) which was well received at festivals under its English title Dang Bireley and the Young Gangsters, but more importantly it was a massive domestic hit and is generally credited with kickstarting modern Thai cinema. The records set by Dang Bireley were then broken by Nang Nak, which was Nimibutr‘s second feature and raked in 150 million bhat at the box office, equivalent to 3.9 million US dollars. Nimibutr has also directed for Thai television, receiving a Gold Award for the miniseries Monday Short Story.

As a producer, Nimibutr oversaw Bangkok Dangerous, the award-winning first film from Danny and Oxide Pang who went on to make the international smash The Eye. He also gave his old friend Wisid Sartsanatieng, who had written the screenplays for Dang Bireley and Nang Nak, his first directing job. The result was the internationally acclaimed Tears of the Black Tiger, possibly the first ever Thai western. 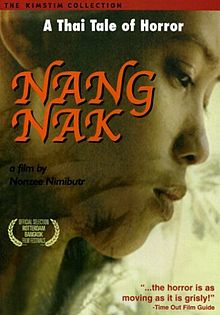 Nimibutr was credited as co-producer on Tanit Jitnukul’s war epic Bangrajan - a sort of Thai Braveheart - in 2000 and also produced the 2001 romantic comedy Monrak Transistor, directed by Pen-Ek Ratanaruang. That same year he returned to directing with the controversial erotic drama Jan Dara, the first production from his new company Cinemasia, which was based on an infamous 1966 novel. Even though Nimibutr himself was by then sitting on the Thai Film Censorship Board, the film still had to be trimmed before its domestic release. Last year he directed ‘The Wheel’, the Thai contribution to the three-way co-production Three, and he is now reportedly at work on a movie set in a monstery called Mai Hed Prated Thai (which translates as something akin to ‘Footnote, Thailand’).

Nimibutr is divorced with one daughter, born in 1995. There is a January 2000 interview with him, conducted by Canadian film-maker and festival organiser Mitch Davis (Divided Into Zero), in the excellent FAB Press book Fear Without Frontiers.