Nu Image - they like their titles simple and their sequels to just have a number stuck on the end (although in the USA this was apparently released as Octopus 2: River of Fear). Also, their sequels never have any connection with the previous films, so don’t expect this to relate in any way to Octopus.

The oversized cephalopod this time around is not hanging around out in the deep but has somehow made its way into New York Harbour. There is some talk of it having come down from Nova Scotia with the cold weather or something, but unlike the first film there’s no explanation of how the beast got to be so huge. Nor, bizarrely, does anybody comment on how much bigger than even the biggest ever recorded octopus this fellow actually is.

When some tourists disappear near the harbour, and then a tug-boat blows up, NYPD Harbour Patrol Detective Nick Hartfield (Michael Reilly Burke, who plays the title role in Ted Bundy) becomes convinced that the perpetrator is a giant octopus. No-one believes him of course, not even his partner Detective Walter McNair (Fredric Lane: Fortress II, Amityville IV) and especially not his superior Captain Hensley (Paul Vincent O’Connor). 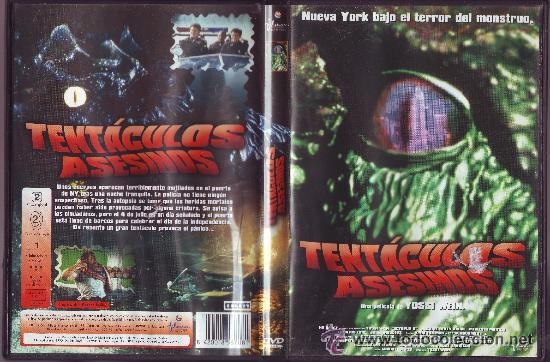 But more people start disappearing, and then McNair is attacked underwater and Hartfield is unable to save him. Mixed up in all this is Rachel Starbird (Meredith Morton: Alien Fury) who works at the Mayor’s office. You see, these events take place over the few days leading up to 4th July 2000, when New York is expecting millions of visitors for “the largest Independence Day celebrations of the millennium” with “20,000 boats in the harbour.” That’s right, it’s yet another don’t-make-a-fuss-about-the-monster-it’ll-ruin-the-tourist-trade Jaws rip-off. Oh, and Rachel is chaperoning twelve kids from various countries who are going to make some sort of symbolic international gesture. Oh, and the American kid is in a wheelchair. I'm not making this up.

Hartfield teams up with a new partner called Tony (John Thaddeus: The Young and the Restless) and they arrest vagrant Mad Dog (Clement Blake: Minority Report) because he is found using the credit card of one of the dead tourists. But Hartfield continues his assertion that it’s not Mad Dog: “Not only have you got the wrong man, you’ve got the wrong species!”

It all finishes amid the 4th July fireworks (there is no sign of those promised 20,000 boats, by the way) with Hartfield, Tony and three expendable Harbour Patrol cops attacking the octopus with harpoon guns to no effect, then Hartfield attaches a bomb to it - I’ll just say that again: he attaches a bomb to the octopus - and blows it to kingdom come.

But wait: intercut with this we saw Rachel and the twelve kids heading off in a school bus to do their ceremonial schtick. Obviously something is going to happen to them. I assumed that the octopus would rear up out of the water and swipe the bus off the Brooklyn Bridge - but no! No, the bus takes the tunnel and the octopus’ hectic defence against the underwater cops is causing it to crack the tunnel roof, so for the last 15 minutes, with the monster defeated, the film turns into a rip-off of the Sylvester Stallone movie Daylight. Hartfield scoots down an airshaft, ends up right next to the school bus - nobody has made any attempt to head up back out of the tunnel - and helps everyone to safety.

Then the octopus reappears one last time but Hartfield and Tony fire explosive harpoons into it and blow it up. Again. Hang about...

The octopus in Octopus 2 is considerably smaller than the octopus in Octopus - this one certainly couldn’t sink a cruise liner. In defiance of basic octopoid physiology, it has a ridged, bony body and glowing yellow eyes. CGI is used for long shots but there is far more use of rubber tentacles than in the first film, which the actors have to physically wrap around themselves, struggling like a 1950s Tarzan battling a rubber crocodile. Willie Botha (Octopus, Spiders 2, Shark Attack 2 and 3) is credited as Special Effects Supervisor.

Unusually for a Nu Image movie, the scene depicted on the advance publicity - a giant octopus climbing up the Statue of Liberty - actually does occur in the movie. It’s only a dream sequence, but it is actually one of the more spectacular effects sequences. Of course, the giant mollusc’s threat to New York is rather overshadowed by the fact that the World Trade Centre is visible in several shots but had disappeared by the time this was released in late 2002.

Director Yossi Wein could probably do this sort of thing in his sleep, having helmed Cyborg Cop III and Operation Delta Force II and V among other StraViSNuTs, though he remains best known as one of the most reliable cinematographers in the field, with credits that include Cyborg Cop I and II, Shark Attack 2, etc). As often happens when a DP directs, everyone on the camera crew has moved up one place, so the cinematographer on this movie is Peter Belcher (Spiders 2, Operation Delta Force V) who is more often credited as camera operator (on Shark Attack 1 and 2, Cyborg Cop II, Project Shadowchaser II, etc). Impressively, the bulk of the film was shot in Bulgaria, as most Nu Image pictures seem to be nowadays, yet the second unit footage of New York is seamlessly integrated and it’s only the fact that 90 per cent of cast and crew names end in ‘-ov’ that gives the game away.

Octopus 2, as I’m sure you’ve gathered by now, has no connection with Octopus, and is a slightly better film. The characters are more interesting and more likeable, and the city harbour setting works much better than the first film’s submarine. Which is not to say that Octopus 2 makes sense. It’s packed with plot contrivances and dangling plot threads (there’s a subplot about a drug-smuggling judge that goes absolutely nowhere) and the scientific mumbo jumbo that enables Starbird to identify the monster’s lair is embarrassing gobbledegook about levels of caesium. Which she measures with what appears to be a handheld mass spectrometer. Hmm, yes. This is especially daft as it has already been established that all the attacks happened in the same place at the same time of night.

But the daftness is part of the appeal of these films. Without being flashy and ‘cult’, Nu Image are keeping the B-movie flag flying with films like this. They don’t make sense but they’re professionally made and they’re fun to watch.