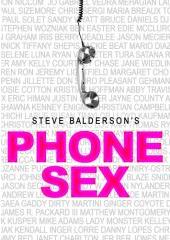 Steve Balderson is American cinema’s best-kept secret. Away from the cheap glitter of Hollywood, in deepest Kansas, Steve has made two simply brilliant movies, Pep Squad and Firecracker, which have been smash hit festival faves. For his third feature, young Mr Balderson has done something, ah, completely different.

The premise is simple, and bear with me even if it sounds like bollocks, because it’s not, it’s really not. Steve e-mailed several dozen friends and acquaintances with a simple question: “What is sexy?” He invited them to leave a message on an answerphone. Then he took all those messages, edited them together and added some visuals.

In other words, what we have here is 95 minutes of (slightly tinny) people discussing sexiness over various still stock photos. It shouldn’t work, should it? It could have so easily been terrible. Or perhaps Steve could have gone through the messages and realised that there was nothing there to work with and the experiment was a failure. In fact, for all we know, he could have tried this five times before with different friends and/or a different question before he got something that works. With an avant-garde project like this, you never know whether it will all come together or whether it will crash and burn.

It did not crash and burn. On the contrary, Phone Sex is a triumph. Here is that rarest of things: an avant-garde film which is both interesting and entertaining.

The responses vary wildly. Some people read out prepared statements or lists, others improvise on the phone. Some list the aspects of a person which can be sexy, some suggest famous people who were sexy, some just cite concepts or ideas that are sexy. For some people, the response is purely personal, for others they’re clearly searching for some greater, broader generalisation - although ultimately everything in the matter is personal of course. Pop singer Josie Cotton kicks off proceedings with a rather rambling attempt to actually define the word ‘sexy’.

Some calls are short, some long, some people ring back later with other ideas. Most, but not all, are quite clean. What come through above all is the sheer variety of responses; the only three things that get frequent citations are (a) confidence, (b) “my voice” and (c) Steve Balderson (which probably embarrasses the director no end but hey, I’d have kept those in too!).

Actually what comes through more than that, if I can contradict myself, is the way that people open up their souls to Steve, or at least to his answerphone. There’s some incredibly candid admissions here and a great deal of poetry (not literally). Choosing the right question to ask, in order to generate a detailed and interesting response, is a skill - it’s one I try to practice on this site. Clearly, with those three carefully chosen words, Steve has tapped into something that is just right, that works brilliantly. He could have asked “What do you find sexy?” or “What is the sexiest thing you can think of?” - but neither of those would have got the same responses.

Of course, we don’t know how many other calls Steve received which he couldn’t use, or to what extent he has cherry-picked the good stuff from the 90 or so included here. But that doesn’t matter. That’s his job as film-maker. Let’s face it: he didn’t have to write a script for this one, or direct any actors, or worry about lighting or costumes or make-up or sets or special effects or should we use DV or should we stick with 35mm? The skill in evidence here, and the talent, lies in the way that these messages have been selected, edited, arranged and interspersed with the occasional clip of automated answerphone voice. This isn’t just some random collection of sexy wackiness (or wacky sexiness) cobbled together. It’s been made, and made extraordinarily well.

The visuals, which is obviously what makes this a film rather than just a CD, are stock photos, mostly tinted or toned, which sometimes depict what is being described and at other times seem more tangential. The rostrum camera (I’m sure it’s not done with a rostrum nowadays, but you know what I mean) is constantly, sedately moving, panning, zooming. After all, this is supposed to be a movie.

Some of the callers identify themselves, some don’t. Steve’s address book, it must be said, is pretty eclectic and the people who call him are, almost by definition, an eccentric bunch. Here you’ll find actors, writers, musicians, artists, drag queens and some of those people for whom one can never find a more specific term than ‘performer’. They naturally give a much more elaborate and hence interesting view of what is sexy than might be gleaned from my address book or yours, but also sometimes a view which is disturbing or insecure - there’s a scary pathos to be glimpsed behind some of the forced eccentricity. Some of the callers, it must be said, sound like they have been smoking, drinking or otherwise ingesting various substances before calling. On the other hand, maybe they naturally sound like that.

Possibly because I’m British, or maybe just because I move in different circles to Steve, most of the callers are people I’m not familiar with. All their names are in the end credits and also on the website where most of them link through to biographical notes. Among those I did recognise are horror actress Tiffany Shepis (NyMpha), the ubiquitous Lloyd Kaufman, Russ Meyer starlet Tura Satana, ex-Gogo Jane Wiedlin (whose limited but deeply wonderful acting CV includes scene-stealing roles in Bill and Ted’s Excellent Adventure, Clue and Star Trek IV), magician Penn Jillette and porn legend Ron Jeremy. But it should be stressed that not knowing who these folk are doesn’t matter a jot.

Phone Sex is much more than a weird-for-its-own-sake novelty and much more than just a video installation piece (though it could be shown as such). It’s a remarkably entertaining, intriguing and thought-provoking feature film which will go down well at festivals and could well become a cult hit. It further cements Steve Balderson’s reputation as One to Watch.

And you know what? Just the idea that a friend of mine has Penn Jillette, Ron Jeremy and Jane Wiedlin in his address book is, frankly, awesome.