Now You See Me, Now You Don't 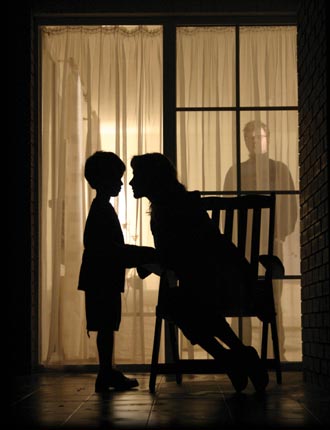 Invisibility has always been the poor relation of classic horror subgenres. While the concepts embodied in the Frankenstein story, vampire myths, zombies, werewolves, even Jekyll and Hyde have all been used by serious-minded film-makers to explore ideas and make serious points, invisibility remains largely ephemeral.

When not being used solely for the obvious opportunities for broad comedy which it offers, the subgenre nevertheless relies almost exclusively on effects. Good effects or bad ones, any invisibility picture uses them upfront because, apart from anything else, the only way that an invisible character can appear on screen is through their interaction with other people and objects. The character effectively becomes the effects which demonstrate their presence and their actions. This doesn’t have to cheapen the story but it usually does and there is rarely either incentive or opportunity for a film-maker to try something different.

The majority of invisibility pictures, even including James Whale’s seminal work from 1933, are comedies. A few try for outright horror. I can’t think of any which eschew both angles in favour of serious drama.

Well, now the invisibility subgenre comes of age with Most Látszom, Most Nem Látszom, a half-hour Hungarian masterpiece which is one of the most effective, moving, powerful fantasy films that I have seen in a very, very long time.

On the surface, the basic set-up is, remarkably, not dissimilar to that of Invisible Mom: a scientist father brings home from his laboratory an invisibility serum which then affects his family - except that here it is the son rather than the mother who is rendered transparent. 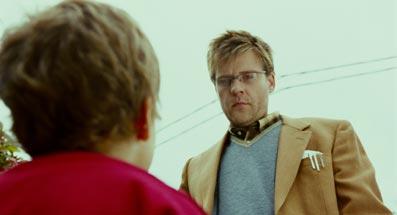 But that’s on the surface; superficial in every sense. Because what we perceive this film to be when we start watching (or from the trailer) is not what it actually is. It would cheapen this marvellous picture to say that it has a ‘twist’ but about halfway through, our understanding of the characters, the situation, even the order in which we are seeing events, is radically (albeit not abruptly) altered. And what starts out as a relatively straightforward fantasy piece becomes a dark, intense study of anguish and damaged relationships. In a sense, those themes were there from the start; but we couldn’t see them.

Dóra Létay is the mother, Ernõ Fekete the father, of a six-year-old boy named Alex (Vitéz Ábrahám). I won’t deny that this film affected me as the parent of a four-year-old. The wide-eyed, tussle-haired head on an impossibly thin neck, the stick-legs protruding from baggy shorts: Alex (like TF Simpson) is the epitome of a little boy. And like any parent, I’m protective of my son so I can sympathise with Alex’s mother when she warns him away from the hot pans on the stove. Only later did I realise that this seemingly innocuous moment is the first clue that all is not right in the household.

All is certainly not right. Alex’s parents exhibit a strained relationship that approached (but thankfully never reaches) that of the couple in Douglas Buck’s notorious Cutting Moments. Writer/director/co-producer Attila Szász uses impressive cinematic techniques to drive home the schism that exists between the mother and the father so that our initial sympathy is for poor little Alex, caught in the middle.

And yet there is something curious about Alex, even before he turns invisible. We never get a good close-up of him; he’s a shadowy character (literally so in one brilliant silhouette shot) who seems both incidental and central to whatever is happening.

What is happening, I can’t tell you. Because this film relies for its effect on at least one innocent viewing. Szász is playing tricks with his audience but ‘playing’ is a misleading word because this film is anything but playful. It’s a bitter, poignant - and for any parent, terrifying - exploration of remorse, guilt, grief and the vagaries of fate. 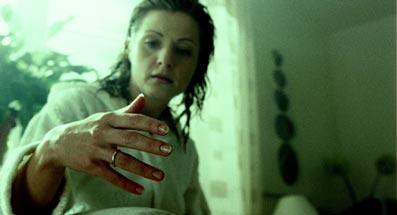 Attila Szász is the former editor of VOX, Hungary’s biggest movie magazine. It’s always good to hear about journos who have made the movie into film-making and gives hope to the rest of us, although Szász already has extensive experience of amateur and student films before he got the VOX gig. NYSMNYD was produced in 2004 and played a string of festivals including Dragon*Con, Moondance, Euroshorts, Palm Springs and Houston, winning prizes at some of them. Credit must be given to cinematographer (and co-producer) Tamás Keményffy who works marvels with the imagery of the film.

I can’t claim any great knowledge of Hungarian cinema but Now You See Me, Now You Don’t is hugely impressive by any standard.