After I reviewed their debut feature Unhappy Birthday in October 2011, the writing/directing duo of Mike Matthews (left) and Mark Harriott (right) kindly answered a few questions by e-mail. 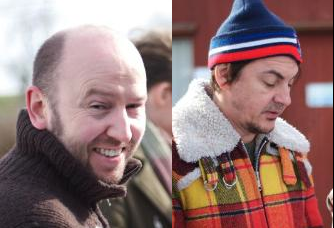 How do the two of you share out the work as co-writers and co-directors?
“We knew we wanted to make a psychological thriller when we visited Lindisfarne island. Then Mark's sister offered us the Market Cross B&B and Kyle Hall locations. With this in mind, we spent a month or so on pre-writing and ideas. We went to Dubai and wrote (ironically) in the sunshine, not the cold, rainy North-East. We sat down and kept all our best ideas, re-writing script versions together, sometimes arguing (healthily and spirited, obviously) but generally picking the best plot lines. Mark pushed the the sexy and explicit scenes more as Mike worked on the character studies and development.

“On set we only had a week and Mike had worked with the DOP Mark Hammond previously so Mike concentrated on the camera aesthetic while Mark worked more with the actors focussing on the performances.” 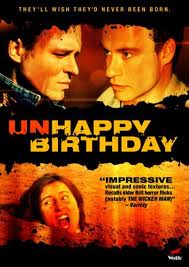 To what extent is this a 'gay film' and to what extent a 'horror film', and what sort of balance were you seeking to achieve between the two?
“Unhappy Birthday was always meant to be a horror/thriller but there has always been a tradition of queerness in horrors from Bride of Frankenstein to many classic vampire films. Instead of the gay characters being these clichéed characters of horror yore we thought we'd update them and make them three-dimensional characters.

“Amen island was always meant to be the opposite to Summerisle in The Wicker Man, being an overtly religious island - Amen would have revolted against an out gay, a bi man and a threeway sexual relationship with a sexually experimental female, so it fitted into our story so well. We used their sexuality to bring more depth and horror into the film, what could be worse than having to breed the next generation of Amen islanders using the sperm of a raped gay man! We thought the irony of this would serve the film well so the ideas of a gay sub plot and a horror worked in tandem.”

How close is the finished film to what you originally set out to achieve?
“As our budget was so tiny (£5K) we wrote this with no budget in mind. We did have to leave out a lovely spooky scene in the local shop which was upsetting and we also had to cut out some dialogue which didn't work as we only had two takes max on each scene. We also had to shoot the final scene of crucifixion and castration on the field in 10 minutes as we lost our light which was a pity, so there were some changes we had to deal with. We discuss this in more depth in our featurette The Making of Unhappy Birthday on the DVD. On the whole, as it was shot in a week, we were so happy by the result.”

How did you assemble your cast and crew?
“Christina De Vallee, Jon Keane and Jill Riddiford were actor friends of ours and we based the characters around what they would be capable of. David Paisley is a great TV actor so we were delighted he said yes after reading the script. The crew was brought together from teams we worked with in both of our general TV directing work. Everyone worked for free and each person has a percentage stake in the film and spared their own time to work on something slightly more ambitious.” 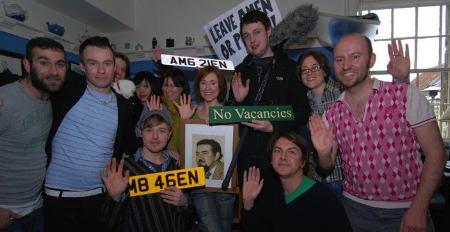 How has the film been received so far and what sort of audience mix is it attracting?
“We have had some amazing screenings at the BFI Southbank, Apollo Haymarket , Tyneside cinema and regional filmhouses in the UK. It's difficult to know who the audience is made up of. In the USA we have played in San Francisco, Seattle and more festival screening announced on Facebook, and Wolfe Releasing are launching the DVD for Halloween. Other countries around the world are screening the film such as Scandinavia (Copenhagen), Africa, Canada and a long list of others coming up soon. We would like to think the audience is made up queer film buffs and horror lovers!”

What are your plans for the future?
“We have interest from Italy and France for distribution so we hope that this will come to fruition and we continue to have cinema screenings in the UK which can be seen on our Facebook pages. The film is being released in the UK on DVD by Peccadillo and in USA by Wolfe. We are staunch horror lovers and we intend to make another horror in the future but are currently developing a romcom! Quite the opposite!”

(Supplementary question for Mark) For all the British horror completists out there, can you tell me a bit about the Jack the Ripper sequence in Secret Diary of a Shemale and any other horror-related pornos you've made?
“I shot the Jack The Ripper scene in Secret Diary of a Shemale (available to download on the Television X website) in Shoreditch with the help of horror maestro David McGillivray. It was a funny shoot as Alekssandra my lead was walking through the streets at night in just nipple tassles and a rubber cape. Lots of guys tried chatting her up, one even lit up the scene using his car lights in return for her card (he probably didn’t realise she was a chick with a dick!). 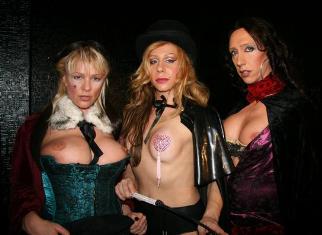 “The sex scene was between Starr and a German trans performer. We shot the interior above a tranny club in Walthamstow. I liked the idea of the ghosts of Jack the Ripper victims finding solace in their deaths by having sex they wanted with one another and enjoying it rather than doing it for money. In the scene Starr (a biological female) discovers her working girl colleague has a cock under her dress. She loves the sensuality of this discovery and they had a fantastic fucking scene together. I liked to think that there might have been many men that dragged up as female prostitutes in the Ripper days to make some money, fooling their clients...lol!!!

“I've also directed Fang Bang for Television X, which is a horror spoof of True Blood. It’s probably my favourite series for TVX. It even has a scene where a vampire bride (Stacey Lacey) is fucked by her creator (Johnny Cockfill) on a coffin and inside is her dead husband whom she has just fucked then drank his blood dry. Check it out...hardcore horror, werewolves and vampires!!!”