Brian O’Hara, director of the fabulously OTT monster comedy Rock'n'Roll Frankenstein, answered one of my famous e-mail mini-interviews in January 2003.

What was the original inspiration for Rock'n'Roll Frankenstein, and how closely did the finished film turn out to what you initially envisaged?
“The original inspiration came when I was in a bar late one night with my friend Vito Cannella. We were tossing ideas around and he mentioned the premise of creating a Frankenstein monster with the body parts of dead rock stars. I immediately was drawn to the idea and saw the humor if the monster was equipped with incompatible genitalia - and naturally, Liberace came to mind. I told Vito I was going to write a script and I'd give him co-story credit. The finished film closely resembles what I had written. As for the actual visuals, I give all credit to Jay Hillman, the DP on R&R F. I really like the look of the movie and I think Jay is incredibly talented.” 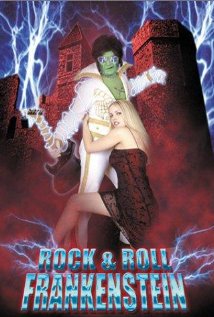 What sort of budget, shooting schedule and post-production period are we talking here?
“The budget on R&R F was about $275,000. A significant portion of that went to the blow-up to 35mm (we shot in super 16mm). Our original shooting schedule was 23 days and a few months later we shot for five additional to get pick-ups and reshoot some out-of-focus footage caused by a defective lens. I edited the film at home on a D/Vision computer (couldn't afford an Avid). From the end of shooting until a final 35mm print was struck it took about a year.”

Clearly the film has received very mixed responses: why do you think festivals as far apart as Korea and Argentina have welcomed it while some of those closer to home have rejected it?
“The reason why R&R F wasn't screened at film fests in the USA? First of all, the USA doesn't have the tradition of festivals which screen horror and fantastic films as many European countries do. And I wasn't going to waste my time (or money) submitting to Sundance and that ilk. So what you have left in the USA for a film like R&R F is the ‘underground’ fests. While R&R F is considered offensive by a certain number (probably a majority) of people, I thought this would serve me well in getting accepted to underground fests. Ironically just the opposite happened. Why? Because R&R F unapologetically ridicules ‘the gay lifestyle.’ It turns out the people who organise these underground film fests are either gay or are politically correct types who are absolutely appalled by a movie like R&R F. None of these people have a sense of humour.”

Where did you find your cast and crew?
“I called individuals I knew and asked them to recommend crew people and often times these people wouldn't or couldn't work for the low pay I was offering so they would in turn recommend other people. It took a while, but eventually we were able to assemble a talented and hard-working lot.”

You can't live off one film forever, so when can we expect a new feature from you?
“I haven't a clue. I'm broke and no one's offering me any money to make a movie. If I do get a chance to make something else, out of the scripts I have sitting on the shelf the one I'd pick is called Dance with the Devil. It's about a nun who becomes a topless dancer in the course of investigating the murder of her wayward twin sister.”
Posted by MJ Simpson at 17:30