I grabbed a quick interview with Ewan MacGregor when he was playing a zombie in the Tales from the Crypt episode 'Cold War' (also starring Jane Horrocks and Colin Salmon). This was shortly before he was announced as the star of Star Wars Episode One - damn! This also predates his appearance in Solid Geometry. This interview has never appeared in print. 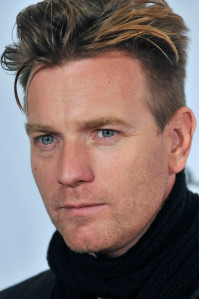 This looks good fun. Is it?
"Yes, it certainly is. We're having a real laugh doing it."

Is this anything like Shallow Grave?
"No, it's very different. There's a bit violence in it, but that was a very real situation and this is a very unreal situation."

Are you hamming it up a bit?
"Yes, we're just having a laugh with it."

Are you familiar with the series?
"No, I've never seen any of them. I don't know if they're showing them here. I look forward to seeing this one, though."

Did you audition for this?
"No, I was just asked to do it. I don't know why, but they asked me to do it and I thought it would be a real laugh. It's a five-day shoot so it's really fast, but it's been good. It's got guns - I haven't done anything with guns in it before. It's frightening how much fun that can be!"

I hear rumours that Danny Boyle has been signed up for Alien IV. Are you hoping for a part in that?
"Well, I'm not sure if he definitely is yet."

I spoke to America and they said he was definitely doing it.
"Well, I spoke to him and he said he wasn't. I don't know if he is or not. But I don't know, it depends if there's a good part in it."

So what have you got lined up at the moment?
"I go away to the States in February to do a film called Nightwatch, a quite scary thriller about a nightwatchman. A spate of necrophiliac serial killings is going on and my character gets framed for them."

Your CV seems to concentrate on horror and dark stuff. Is that just coincidence?
"Yes, I've done lots of other things that aren't necessarily dark. But this is a laugh, this is something different, it's very quick." 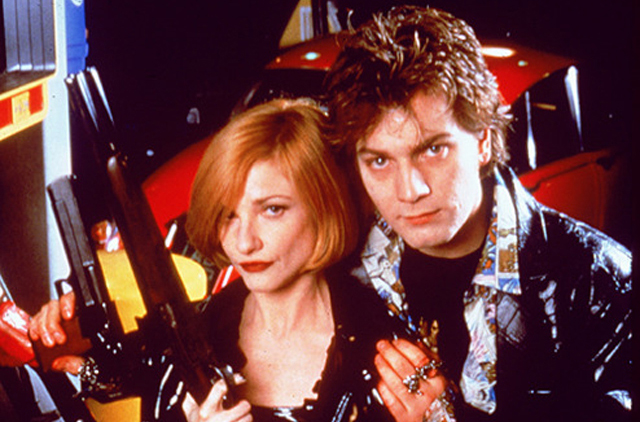 Everybody seems to be having a good time.
"I think they are, yes."

Have there been any problems with any of the special effects?
"No, everything's going very well. I think there's only been one mis-aimed gun-wound, and that was this morning. But everything's worked very snappily so far. There was a shoot-out on the forecourt of a garage, with lots of plantpots and things blowing up and lots of guns firing. Everything's gone very smoothly. There's been no accidents."

Can you give me a precis of the story?
"Me and Jane are both zombies, which you don't know till near the end. We go to hold up a bank, but the bank's closed - it's not there any more. And so we end up holding up this garage. As we arrive, I'm messing around with this huge pistol and it turns out that there's three guys holding the shop up already. So there's a bit of a scuffle with them. Then our driver comes in and gets blown away. Jane shoots the guy that's holding me, then we get away and get back to the flat and have a huge argument. I've been shot in the leg; she's complaining because I'm making so much noise about it and she says, 'You've been shot lots of times before - don't make such a fuss.' So I show her that it still hurts by shooting her through the shoulder. She goes away and she's leaving, and I say that she'll be back because we're two of a kind, but you're not sure why that is. She goes away and pulls this enormous, gorgeous guy and brings him back to the flat and spends all day seeing to him. Then I come back and we have another slight argument and I shoot him.

"We get back together and I say, 'Look, you're silly. We're two of a kind - you can't leave.' And I ask her to tell me why, and she says, 'Because we're zombies.' I say, 'Yeah, we're ghouls, we're the walking dead.' Then suddenly the guy I've just shot rears up in the background and he turns out to be a vampire! With horrific eyes and teeth effects. There's a big fight and we end up all broken up. We end up getting pulled through a window by the vampire, who of course flies away. We end up broken in bits - half my head gets blown off at the end. Tomorrow I've got the big prosthetics scene. Half my face has gone; I've not seen it yet but apparently I'm not going to be able to eat for the whole day. I'll be drinking soup through a straw. The whole of half of my face has been gone - you see the grooves where the pellets have hit. It should be quite nasty." 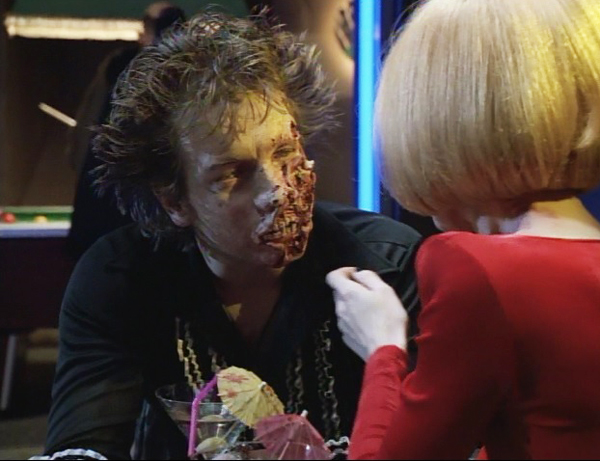 How did you get into acting?
"I've always wanted to do it, so I was going to do it since I was a kid. I just made sure that I did. So the rest of the time was spent working out what an actor was, finding out how to do it. I left school early and went to work in a theatre backstage. i went to a one-year course in Fife, in Theatre Arts, then I went to a three-year course down in London. I left early to do Lipstick on Your Collar. That was nice, a really very lucky break."

Are you hoping to become a big movie star?
"No, just so long as I'm making good movies. I'm not interested in becoming a huge movie star, but I am very interested in making good movies. That means to work wherever the script comes from. It doesn't matter whether it's America or here, or Europe or wherever. It's good writing that's important to me."