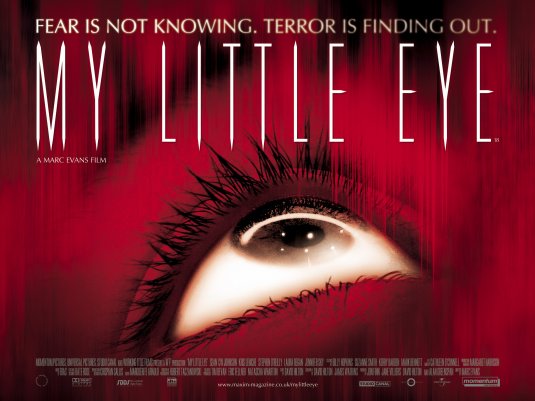 Can you believe the hype? My Little Eye comes to DVD as part of the so-called ‘British horror revival’ with the unfortunate setback (among discerning audiences) of having been widely and lazily compared with the utterly shit Blair Witch Project by know-nothing mainstream critics still labouring under the misapprehension that BWP was either good or popular. Do not compare the two: Blair Witch was all gimmick, all hype, no film and died a well-deserved swift death through word of mouth, whereas My Little Eye is a good, solid, traditional horror film which has the advantages of being (a) extremely well made and (b) very scary.

The set-up is simple: five young people agree to spend six months in an isolated house, entirely cut off from the world and under the 24-hour surveillance of dozens of webcams. Their lives will be broadcast on the net and - here’s the challenge - if all five are still there at the end, they each win a million dollars, but if any one person leaves, all forfeit the prize money. 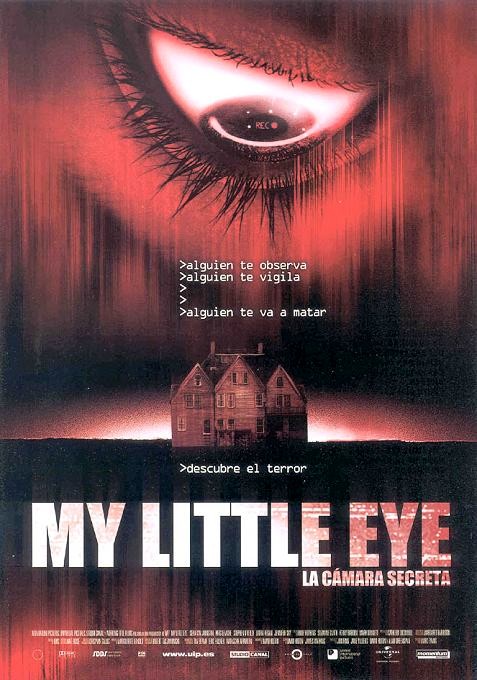 Welsh director Marc Evans’ third feature was shot on DV and, not having seen it on the big screen, I can’t say how that affected the theatrical presentation - but it makes no difference here. Very wisely, Evans uses the actual webcam footage very sparingly and most of the shots are either faux webcam or just straightforward set-up camera shots, while the (very good) editing is as mainstream as they come. This does not look like a 90-minute webcast (despite what those same idiot mainstream critics say) which is A Good Thing. Nothing is more irritating than a gimmick that overpowers a whole film

The other thing that didn’t raise my hopes was the ‘reality TV’ subject matter, which seems to have been done to death in movies now, from Halloween: Resurrection to Hell Asylum to Erotic Survivor. Reality TV is watched by - and stars - morons. There’s so much of it on the small screen, do we want it in our movies too? In fact My Little Eye, while using a supposed reality webcast as a set-up, owes more to old-style spend-a-night-in-a-haunted-mansion-or-forfeit-the-inheritance horror movies like The House on Haunted Hill or The Cat and the Canary. The webcast experiment is a good reason to have five strangers living together in an isolated location and reluctant to leave, but it is more than that. As the film progresses the situation becomes more and more relevant in the way that it affects the characters’ attitudes and fears, especially when they discover just what is - or isn’t - being shown on the web. (Returning to the subject of morons for a moment, one very unrealistic aspect of the film is that all five characters are reasonably intelligent and erudite, unlike anybody you might ever see on Big Brother.)

The small cast of young actors are all excellent, so kudos to both them and the casting director. Despite what the publicity claims, they are not completely unknown, especially Jennifer Sky (flirtatious Charlie) who played the title role in Cleopatra 2525. Kris Lemche (geeky Rex) was in Ginger Snaps and eXistenZ, while Sean CW Johnson (hunky Matt) was the red ranger in Power Rangers Lightspeed Rescue! Production design, music and DV cinematography all complement the film’s premise extremely well. Tim Bevan of Working Title executive produced. 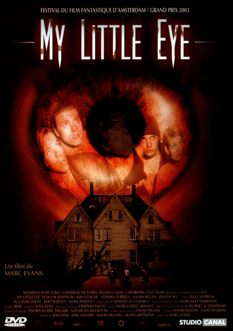 On DVD, one can watch the film in standard mode, with optional commentary by director and producer, or in ‘interactive mode’ which makes full use of the multiple camera set-ups, but obviously is not recommended for a first viewing! A second disc has half an hour of deleted scenes (also with optional commentary), an excellent half-hour ‘making of’ which is really more of a ‘distribution of’ documentary and all the more interesting for that, plus trailers and a stills gallery (which, annoyingly, cannot be flipped through).

My Little Eye is terrific. It is credible, it is scary, it builds tension and character in equal measure and at just the right pace. The trepidation I felt slipping this disc into the player was largely based on its reputation as a gimmick film (not helped by the awareness of the ‘interactive viewing mode’) but I can reassure you all that this is no gimmick film. It is a down-the-line horror film which is shot in a perfectly normal way, using possible gimmicks, like webcam POV shots and infrared night-time shots, sparingly and only when required for plot or characterisation.

Forget the hype, sit back and enjoy. Heartily recommended. Oh, and it’s British!

[For a somewhat different, retrospective review of My Little Eye, see my book Urban Terrors. - MJS]
Posted by MJ Simpson at 22:51