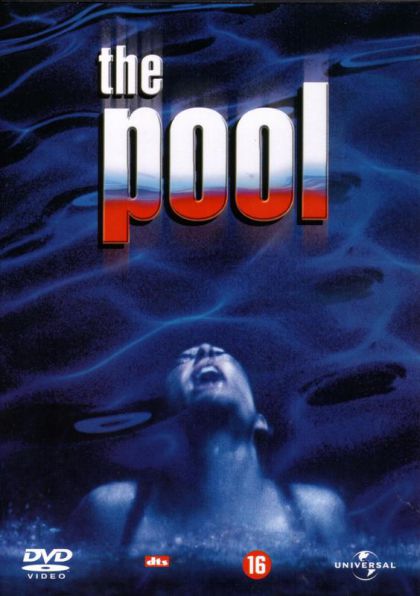 Twelve teenagers (most of whom, in the tradition of these things, are clearly in their early twenties) are stalked and despatched one by one by a masked psycho. It’s not something we haven’t seen plenty of times before. Nevertheless, The Pool turns out to be a decent example of the genre and an enjoyable 90 minutes.

What attracted me to this tape was that the names in the credits block suggested that this was a Czech movie - and indeed it is. Well, it’s a Czech/German co-production, with a Czech director, a largely Czech crew, filmed entirely in Prague and Liberec and funded with a mixture of Marks and Korunas*. It was shot in English although there are credits at the end for a German dubbed version, and it was released in that country as Swimming Pool.

The film kicks off with a Scream-derived prologue starring Anna Geislerová, who was in a 2003 British sci-fi short called Ozone but more relevantly here is easily the biggest star in the movie - in Czech terms - justifying her role as the equivalent of Drew Barrymore. Catherine (Geislerová) is on the phone to her mother while preparing a dinner for her boyfriend Oliver (Josef Pejchi). She seems to be dubbed and I wouldn’t be surprised if this particular scene was originally filmed in German or Czech. Oliver’s car arrives but the driver is dead and bloodied, and Catherine then plays cat and mouse in her house with an assailant who is revealed to be a machete-waving psycho dressed all in black with a white skull mask. Catherine leaps out of a window but is dragged back in by her feet, across the broken glass, hacked up some more and thrown into the indoor swimming pool. 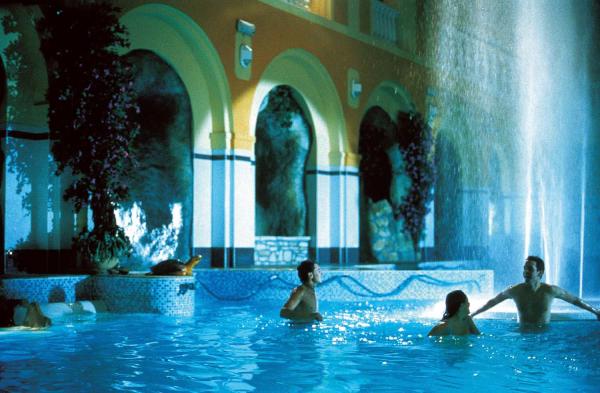 But that’s not the pool of the title. We’ll come to that.

We are introduced to our main characters as they sit their finals at the International High School in Prague. This is a clever sequence which is designed to show their characters as it cuts between them answering questions in verbal exams - but it’s all a bit too hectic and in fact one of the film’s major faults is that there are too many characters and it takes most of the movie to work out who is who. On the other hand, that helps to make the killer’s identity even harder to guess. Or maybe it’s just me.

Anyway, here’s who we have. The nominal leader of the gang is local boy Gregor (Thorsten Grasshoff): cool, tall and handsome but a bit of a knob. He has a timid American girlfriend, Sarah (Kristen Miller: Cherry Falls, Team America: World Police), and an Argentinean sidekick, Diego (Maximilion Grill). There’s the rather aggressive German girl Carmen (Elena Uhlig) who, we later discover, has some sort of secret history with Gregor, and there’s American Chris (Jonah Lotan: NY-LON) who is a bit of an arse. Scottish Mike (James McAvoy: Shameless, Children of Dune) is an item with nervous New Zealander Kim (former Home and Away star Isla Fisher, who was born in Oman to Scottish parents and raised in Oz, but her accent here definitely sounds more Kiwi) who is convinced that she has failed her exam. Making up the numbers are English Frank (John Hopkins: Sergeant Scott in Midsomer Murders) who carries a torch for Sarah, Svenja (Linda Rybová: Dark Blue World), Mel (Cordelia Bugeja: The Calling, MindFlesh - who is British, despite her exotic name) and Carter (Bryan Carney: The Devil’s Tattoo). They’re all rich kids and they’re determined to celebrate the last day of school with a party. Not just the official party, but a private party at a special secret location, chosen by Gregor. 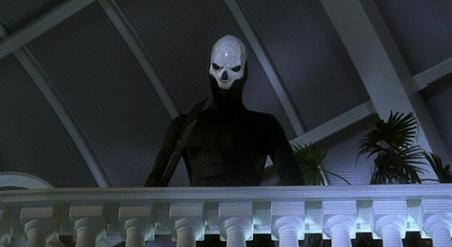 The location that Gregor picks is a health-spa/hotel/thing with an absolutely huge and fabulous swimming pool (the Aquapark Babylon Centrum in Liberec is the actual place if you want to visit). It has fountains, it has slides, it has grottos, it has a well-stocked bar - and it is all closed up for the night. But Gregor calls on the lock-picking skills of Martin (Jason Liggett), once part of the gang but now a motor mechanic, and carrying his own torch for Mel. The students drive to the venue in four cars, drinking and laughing, late at night. Martin is there already, with the burglar alarm disabled and the door unlocked.

The first sign that something is seriously, seriously wrong is when Carter and Svenja are found dead in a cloud of blood in a subsidiary pool at the bottom of a water slide. Neither was exactly a clearly defined, well-rounded character, but nevertheless their deaths - which we witness before the bodies are discovered - are nasty and rather shocking. This happens about halfway through the film and while it hasn’t dragged - there has been plenty of plot development and characterisation - the killings really make you sit up and take notice. Especially poor old Svenja who is killed on the water slide in a way that will make you want to avoid any such ‘entertainment’ after seeing this film. 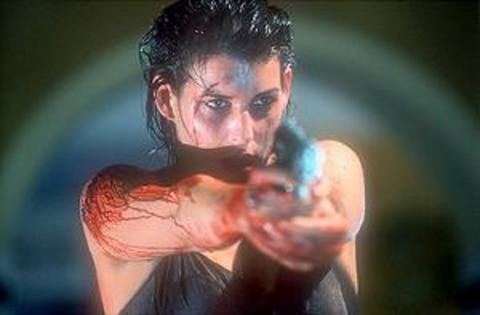 The group has already split up as various individuals and couples go exploring, and a return to the door reveals that it is now locked, as are all the others - and the killer has taken Martin’s lock-picking tools. Is it one of the students, or an outsider now on the inside? Accusations and recriminations fly as the group are gradually whittled down by the methodical, machete-wielding maniac. There is a particularly tense and nasty scene in an air-duct - one of those big ones with unscrewable grills that real buildings never have - which ends with blood dripping down the wall. Intercut with all these goings-on are the investigations of a grizzled old detective, Kadankov (Jan Vissak: Dune), assigned to the death that we saw in the prologue.

The Pool keeps you guessing until fairly near the end, kills off some sympathetic characters whom you would expect to survive, and though it doesn’t end up with a single, lone female survivor, nevertheless the ending is a little bit of a cheat - though not enough to really spoil things. For its genre, this is a pretty good film which has a unique setting, a handful of original ideas and a mixed cast portraying a mixed bunch of sympathetic or not-so characters. I enjoyed this, and I’m not usually a slasher fan.

Of particular interest are the early scenes in Prague which, unusually, here represents the city of, um, Prague. The Czech capital has been vastly overused in recent years as a substitute for 18th or 19th century London (Shanghai Knights, From Hell) or Paris (the Scarlet Pimpernel TV series) and it doesn’t even vaguely resemble either of those cities. Even people who have never been to Prague can recognise it on screen nowadays. Well, here’s a brief chance to see this beautiful city as itself: the churches, the bridges, the whole thing.

Although the Czech Republic has played home to many international productions since the fall of Communism, actual Czech movies released in the west are few and far between, the aforementioned WW2 drama Dark Blue World being a rare example. As for Czech horror movies, the only other one I know of is the recent zombie comedy Choking Hazard. 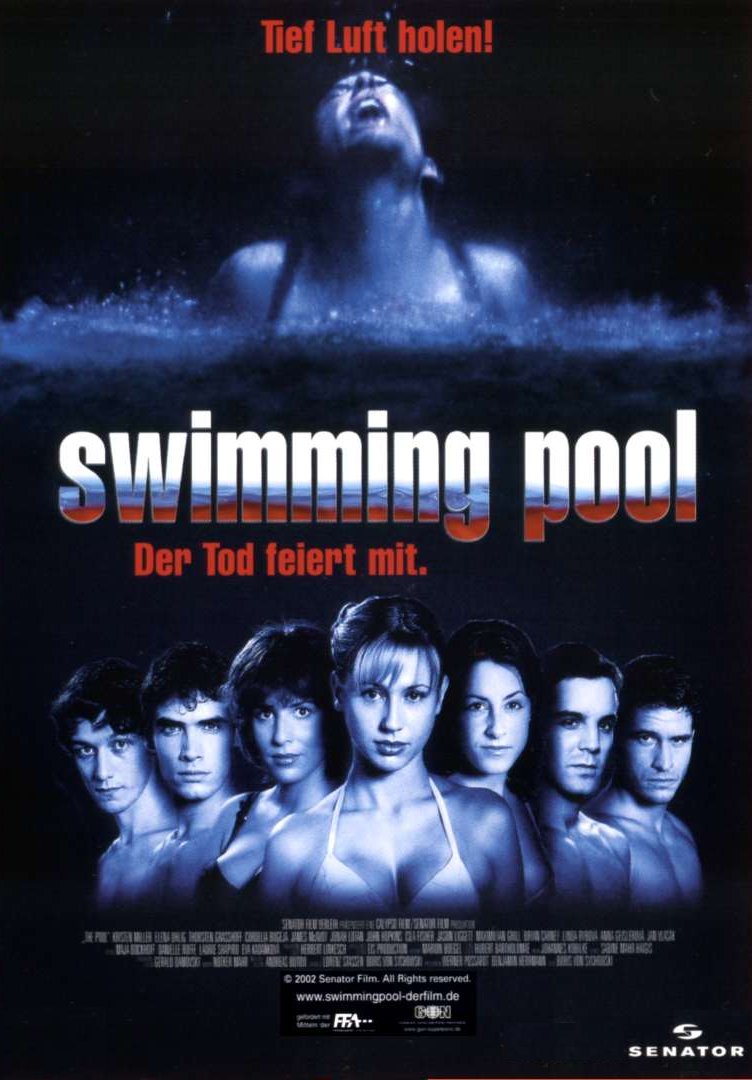 This was the first film from director and co-writer Von Sychowski, who has subsequently directed a TV movie that wasn’t horror but did feature more good-looking teenage boys in states of undress. The Pool is ‘based on an original idea’ by Andreas Bütow, but the really interesting writing credit is ‘script polished by Mike Hurst’. Apart from the sheer rarity of seeing a script polisher receive a credit (largely because, under WGA rules, they wouldn’t be allowed one on an American studio picture), the good news is that this is the same Mike Hurst who wrote, produced and starred in the excellent ultra-low-budget British sci-fi/horror feature Project Assassin.

There aren’t too many obvious special effects but what there are were supervised by Jim Healy who also worked on Dune and Children of Dune. Producer Benjamin Herrmann was co-producer on the German psychological thriller Das Experiment. His colleague, Werner Possardt, was one of the victims of the 2004 Boxing Day tsunami while on holiday in Thailand.

The video sleeve gives a copyright date of 2000 but in the end credits it’s 2001 and that’s what I’m going by.

(Update: I have now spoken with Mike Hurst who tells me that he did in fact write every word of this screenplay. He was asked to completely rewrite an existing script and the only things he had to keep were the character names and the number of visible nipples - which apparently is six! Because of the various tax concessions involved in this German/Czech co-production, however, British-born, LA-based Mike could not be credited as anything more than 'script polisher'.)
Posted by MJ Simpson at 21:42