I love animation, me. I love it all (with the sole exception, as previously mentioned, of anime, but let’s not go into that here). I love Disney and Warner Brothers and Terrytoons and Fleischer and Hanna-Barbera and Cartoon Network and Klasky-Csupo. I love American and Canadian and European and Australian animation. I love feature films and TV series and six-minute shorts and student films and weird experimental stuff. I love cartoons. Cartoons kick arse. 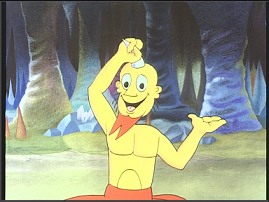 Apart from being diabolically awful in every respect, the other extraordinary thing about this film - which one cannot guess from either the French or English title - is that it is about Baron Munchausen. Who knew? I expect that most of us are familiar with Terry Gilliam’s gloriously extravagant The Adventures of Baron Munchausen and I have fond memories of catching the 1940s German Munchausen movie - a stunning film riven with alarming Nazi subtexts - on a rare TV screening many years ago. There have been a handful of other Munchausen movies, but I had no idea that there were not one but two French animated features about the notorious liar.

In 1979, Jean Image released Les Fabuleuses Aventures du Legendaire Baron de Munchausen which premiered at no less than the Moscow Film Festival; I have no information on any English language version of that. Le Secret des Selenites was the sequel, produced over 1981-82 and eventually released in February 1984. 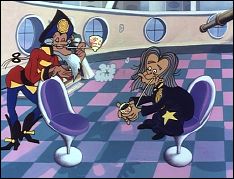 In 1757 ‘famous astronomer’ and/or astrologer Sirius is convinced that there are sentient creatures living on the Moon - “according to my teacher, the eminent Dr Keppler” - who have the secret of eternal life. He is visited by his good friend Baron von Munchausen and we see a flashback as the Baron relates how he was captured by the Turks and forced to work as a beekeeper. Attacked by some particularly fierce bees, he defended himself by throwing a hatchet which flew up to the Moon. The Baron then planted a magic 'Spanish bean' which grew into a beanstalk “faster than a jolly green giant” and enabled him to retrieve his hatchet.

After assorted inanities, Sirius puts his entire personal fortune at the Baron’s disposal if he will agree to fly to the Moon and take a look. Munchausen hires a sailing ship, the Claire de Lune and rounds up his five loyal servants: Hercules (who is very strong), Hurricane (who can blow very hard), Earful (a little fellow with huge ears who can hear at great distances), Nimrod (who can run very fast) and Cavalo (the nature of whose special talent, frankly, eluded me).

The ship heads for the South Seas where it is becalmed. The captain and crew leave in a longboat for ‘Paradise Island’ while Munchausen and his servants raise up three large balloons which are sufficient to fly them to the Moon. Descending towards a large crater, they breathe oxygen from a barrel.

Landing on the Moon, Hercules fights off a giant, blue bee before the expedition is attacked by three-eyed, two-legged red dragons; fortunately they are rescued by large, flying, green seahorses. Then some blue rock monsters attack but the humans are saved by some friendly Selenites. These are roughly humanoid but have three legs and a detached, floating head which is in the shape of a crescent moon, with a pointy chin and a single, large horn in the centre of the forehead. Shown around the Moon, Munchausen is told that the Selenites eat solid honey, that they use vegetables as weapons and that they are hatched from giant nuts. 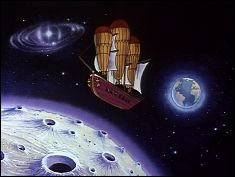 The Selenites are threatened, however, by the Green Means, little pepperpot-like aliens with concertina jaws who fly down to the Moon in small flying saucers, intent on stealing the Selenites’ ‘Talisman of Life’. The Green Means capture and threaten the Selenite’s King and Queen, who wear Inca-style head-dresses, but Munchausen and his servants successfully repel the invaders. As a reward, all six are given a talisman by the King which will grant them eternal life.

Presumably they are given a spare one too because the epilogue sees Munchausen and Sirius, with long grey beards, still alive in the far distant year of 1997, while the Baron’s five servants fly between the futuristic skyscrapers in a variety of advanced aircraft.

This is just terrible. The animation is some of the worst I have ever seen, based entirely on simple repeated loops of motion. Nothing happens that doesn’t then happen four or five times again in succession, sometimes in two alternating directions. This even extends to characters standing still - no-one stands still in this movie! Every character on screen is constantly bobbing up and down or side to side in a loop of animation - watching this is enough to drive you batty. The character design is really crude, almost like a child would do. And every character has a single angle from which they are seen: humans and Green Means in three-quarter, Selenites in profile, Selenite King and Queen full face. No-one ever turns in any direction except the opposite one. 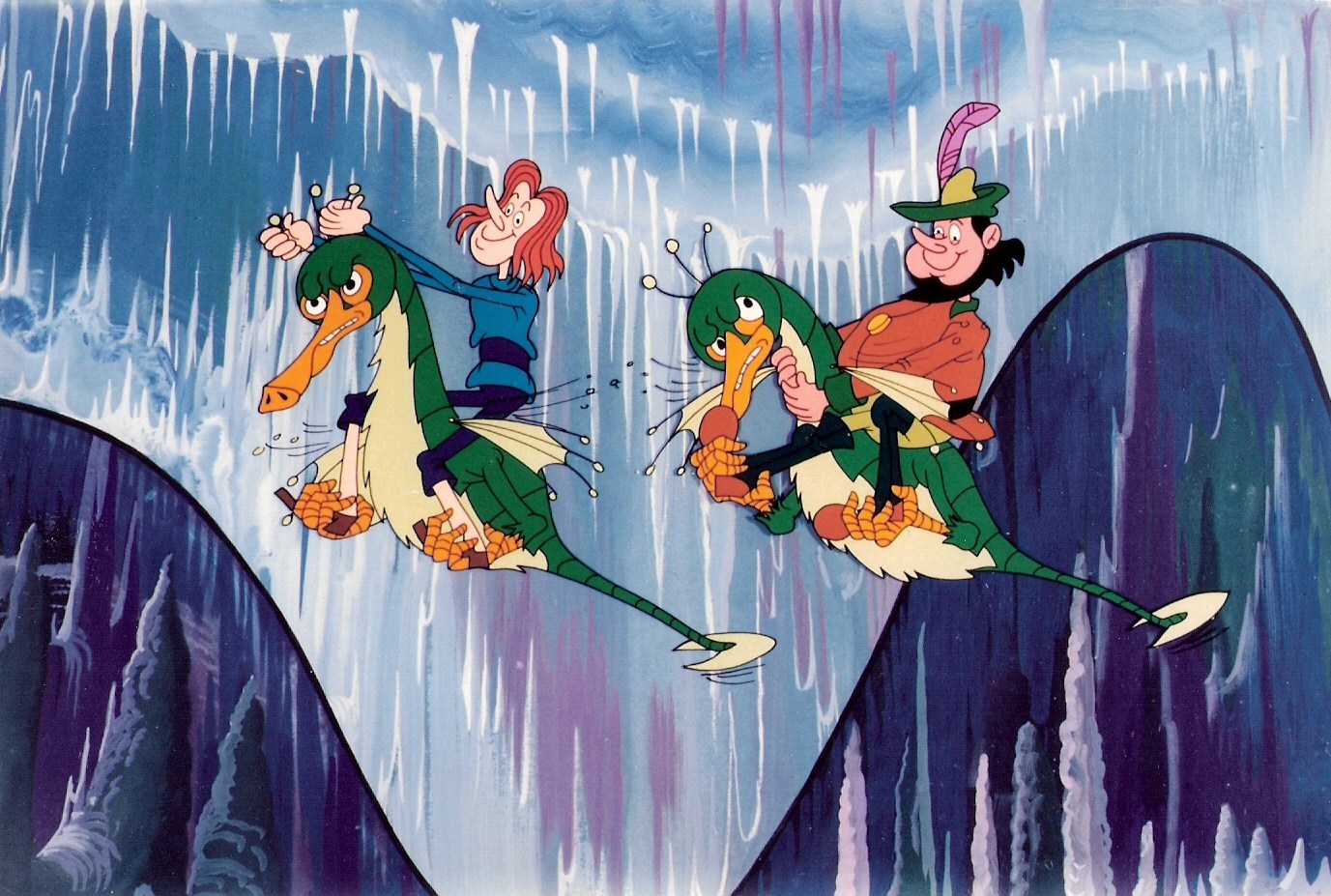 To complement the pisspoor design and animation is an appalling script, devoid of wit, characterisation or interest. It should not be possible to destroy a character as wonderful as Baron Munchausen but Jean Image and chums have managed it. Obviously I’m working here from the uncredited American script, but given the general low quality of the film I very much doubt that the original was much better. A lot of the film is just characters saying “Aha. Um. Oh. Aha.” over and over again as they bob endlessly back and forth in an effort to pad out the flimsy storyline and stretch this to feature-length.

No voice actors are credited on the English-language but the original French version featured Jacques Ciron (Le Testament du Docteur Cordelier) as the lead Selenite with Dominique Paturel as Munchausen. Jean Image was born Imre Hadju in Hungary in 1910 and emigrated to France in 1932. Apart from the two Munchausen pictures, his other films were Jeannot l’Intrepide/Johnny the Giant Killer, Bonjour Paris, Aladdin et la Lampe Merveilleuse/Aladdin and his Magic Lamp, Joe Petit Boum-Boum/Johnny in the Valley of the Giants and Pluk, Naufrage de l’Espace/Little Orbit the Astrodog and the Screechers from Space which I want to see, just on the basis of its English title. All except the first were co-written with France Image who was presumably Mrs Hadju. 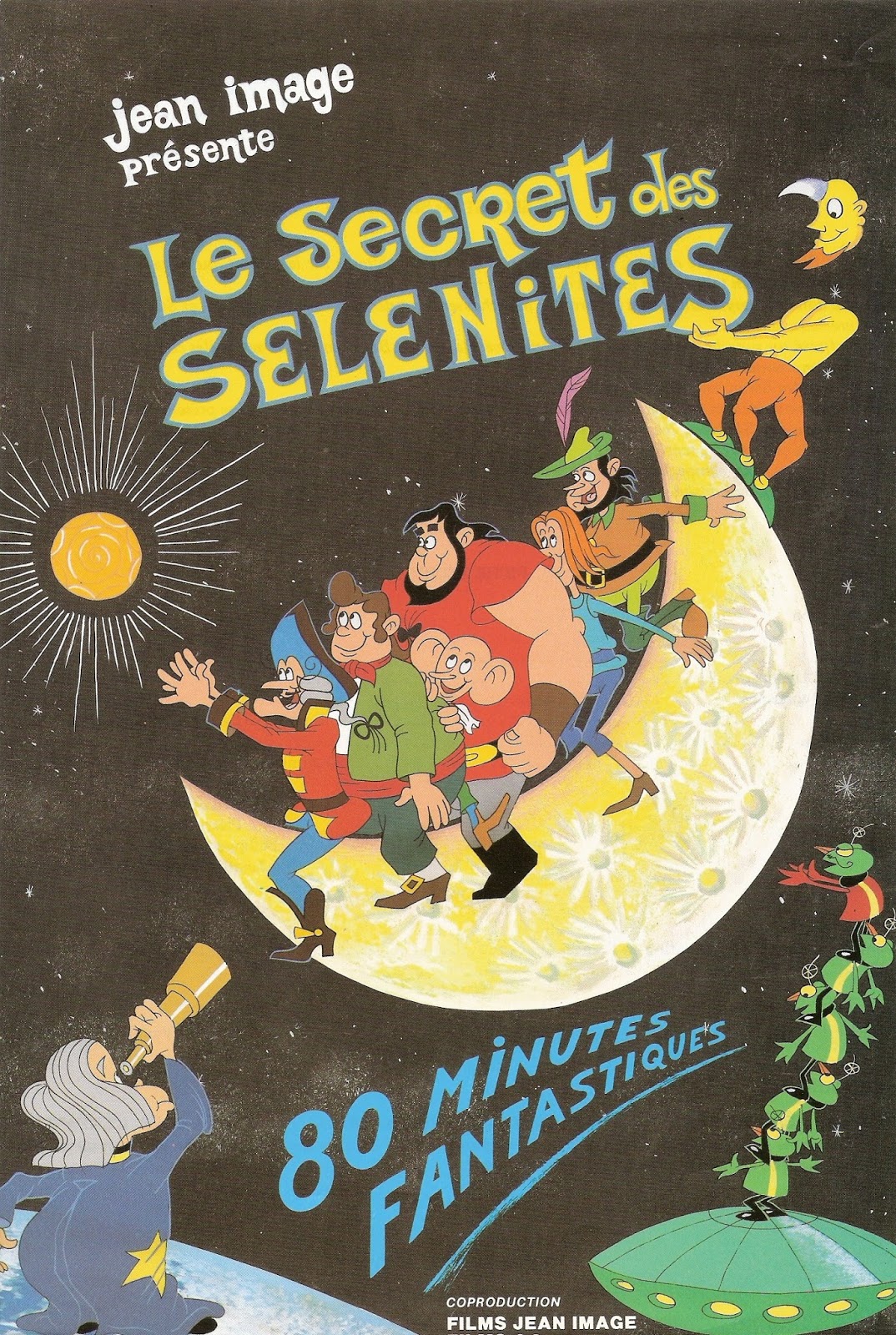 The Images also created an early 1960s cartoon series, Les Aventures de Joe, about a boy who was shrunk to the size of an insect, and a later stop-motion series, Kiri le Clown. One of Jean Image’s lesser known credits is the special effects in the 1951 British short documentary River of Steel, which was shown at Cannes.

But the most curious credit on this film is the annoyingly catchy theme song, based around the English translation of the French title. Words and music are by Haim Saban and Shuki Levy, who later went on to found Saban Entertainment and bring us, among many other things, Power Rangers!

Anyway, Moontrek is awful. I can’t imagine even the youngest, most easily pleased child being anything other than bored or frightened by this rubbish. It is a chore to watch and has no redeeming features whatsoever.