At the end of 2011, Neil Oseman very kindly sent me a copy of his supernatural, demon-busting fantasy Soul Searcher so that I could include it in my book Urban Terrors. And in January 2012, after I had watched the film, Neil provided these answers to one of my e-mail mini-interviews. 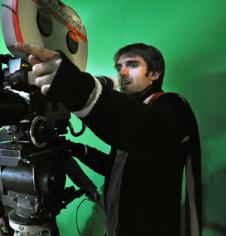 What convinced you that your short film of Soul Searcher merited remaking as a feature?
“During the making of my previous feature, The Beacon, one of the actors suggested it. He had seen the Soul Searcher short and thought it was a really good idea that could be expanded on. This was before Dead Like Me and Reaper were on TV, so the idea of a trainee Grim Reaper really hadn't been done, apart from Terry Pratchett's take on it which was tonally very different.”

How did you assemble your cast and crew?
“The usual stuff - advertising online, calling in favours. The film was almost shot in 2002 so we had a lot of the cast and crew in place before we had to postpone due to budget problems. When we got it up and running again in 2003 we had to recast some roles because people were doing other things. There were probably four solid days of auditioning all told. Although we shot in Hereford - the back of beyond - most of the cast were from London since there just weren't any screen-trained actors locally. The crew were local though and they were all really excited by the idea of a film being made in Hereford - and a really ambitious fantasy-action one to boot. 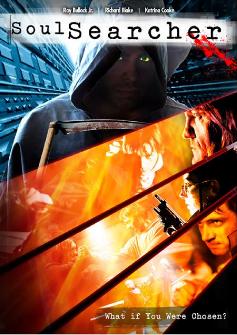 What was the hardest part of making the film? And what was the most fun?
“It was all very, very hard! The first few days in particular were very tough, trying to adjust to the nocturnal shooting schedule, plus I was editing a corporate video during the daytime so I wasn't getting much sleep at all. It was also very hard to face all the compromises of a shoot after having the film in my head for a year or two, because of course in your head it's always the perfect film.

“Shooting the miniature train for the climax of the film was also a huge challenge. We were filming it outdoors at night because we couldn't afford to hire a studio and loads of black drapes, and we built a 25 metre long earth embankment for the train to run along. But when the modelmaker delivered the train it just kept derailing. Then the power tripped out. And it started raining. And at about one a.m. we had to dig up this embankment and put all the earth back where it came from in the pouring rain without having shot anything. A few weeks later we tried again and got the shots in the can, but that first night was incredibly depressing.

“Filming the martial arts fights was nice for me because the fantastic choreographer, Simon Wyndham, effectively directed those sequences for me, so I got to relax a bit on those nights and enjoy watching it all going on.

“My favourite part of the project was the editing. No logistical challenges, no rain or cold - just the creativity of it of turning the raw footage into a story. I also had a great time doing the sound design, going around with a microphone recording all sorts of weird noises and assembling them into a big, rich soundscape.”

How closely does the finished film match what you originally set out to make?
“Pretty closely, I think. There were lots of compromises due to the limited budget and the many problems we encountered during shooting, but the tone, the energy and the fun of it come through as conceived and the shots all match my storyboards very closely.”

How was the film received by audiences and critics?
“Quite positively overall. There were some people who went into it expecting to see something of the same quality as a multi-million dollar Hollywood movie, and of course those people were disappointed, but by and large people saw past the budget restrictions and enjoyed it.” 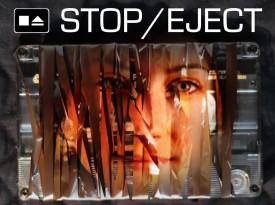 What is the current status of Dark Side of the Earth and what else are you working on?
“The Dark Side of the Earth has been in development for quite some time. We've shot a really slick five minute demo scene - which cost more than the whole of Soul Searcher - and we've got a couple of name actors attached. Right now we're trying to get a name writer on board to polish up the script before we approach some major players.

“At the time of writing I'm in pre-production on a short film called Stop/Eject, a fantasy drama about grief and time travel, and I have a couple of other shorts in the pipeline. The Dark Side of the Earth is a massive project that will take a long, long time to get off the ground so it's important to me to keep making small films in the mean time to stay in practice. You can keep up-to-date with my filmmaking exploits online at neiloseman.com.”
Posted by MJ Simpson at 17:57