My Name is Sarah Hayward 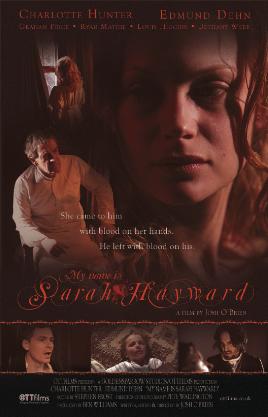 I caught this impressive 15-minute short playing support to The Scar Crow at the 2009 London Independent Film Festival. It is set in the late 18th or early 19th century and is primarily a two-hander between a judge, woken from his sleep, and a young woman whom he had recently sentenced, who has broken into his room.

In carefully written, authentic sounding language she explains the background to the crime for which she was arrested and tried: the murder of her six-year-old son. Wary at first, the judge listens. As her tale, which starts with her out-of-wedlock pregnancy, reaches that tragic night, we fade to the actual events. It’s painful to any parent to watch a film about the death of a child and writer-director-editor Josh O’Brien’s film does a fine job of wringing emotion from the situation without becoming mawkish or maudlin.

And then the twist. The judge won’t change his mind about the sentence he handed down - but what was that sentence?

Cinematographer Pete Wallington (The Symmetry of Love) does a superb job evoking a candle-lit ambience that perfectly fits the atmospheric tale and intriguing characters. Edmund Dehn (Cradle of Fear) is the judge while the title role is taken by Charlotte Hunter who started off with a bit part in Forest of the Damned and went on to stunt double Emma Watson in a couple of Harry Potters. Both are excellent. The other small roles are taken by Ryan Mathie (Just for Fun), Graham Price (Intergalactic Combat), Luis Higgins and Bethany Webb (Sweet Tooth, Blood Red Letters). Stephen Frost (Necromantic, Is Anybody There?) provided the score.

A historical drama is an ambitious film to make, even at this length (despite a passing mention of ‘haunting’ there is nothing supernatural or fantastical here) and My Name is Sarah Hayward works marvellously. It also does a bang-up job of opening up and making visually interesting something which is essentially two people talking in a fairly dark room.

I don’t know whether Josh O’Brien has followed this up with anything but I do hope he continues his film-making.