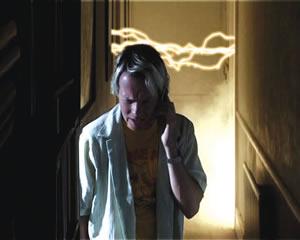 This fun little four-minute short has a similar premise to Small Soldiers and Evolver: a dangerous weapon delivered by accident to the home of an unsuspecting member of the public.

In this case Robert Jones (Johnny Wilson, amusingly credited as ‘Concerned Customer’) takes delivery of something called the Omnicide 8000 and, while we’re never told precisely what it does, its destructive capabilities are amply hinted at as it sends bolts of energy, plumes of smokes and general mayhem throughout Jones’ suburban semi - and eventually beyond.

Fortunately there is a helpline number on the delivery note and on the other end of the phone is a bored customer care officer (Mark Aguera, playing ‘Quality Employee’) who wearily takes down the serial number and offers less than useful advice.

The Omnicide 8000 is basically a one-gag film but it’s an escalating gag with the tension and humour rising in synch to the inevitable, nicely handled climax. The effects are excellent and wisely underplayed, flashing and banging in the background and brief exterior cutaways, which makes them all the more effective and funnier.

Writer/director/producer Ian Hothersall directs with an imaginative eye, notably the shot of the crate being opened which is filmed from inside, and we’re never given a close look at the device itself, because it doesn’t really matter what it looks like. The only other person credited is camera operator Ewan Cassidy.

If anything, the film feels a little too short. There was probably a couple of minutes’ more comedy that could have been extracted from the situation, playing variations on the basic theme of the concerned customer and the bored employee. And it would have been funnier if the latter had been in an open plan call centre rather than a dark, cramped office - but with this sort of low-budget film, you take your locations where you can find them.

A smart little film which looks a lot more expensive than it has any right to, The Omnicide 8000 screened at the 2006 Sci-Fi London Festival and has apparently been picked up for DVD distribution on a Troma compilation.