Prehysteria is a movie which gives the impression that it exists primarily to showcase the effects work of David Allen. Which is great effects work, so that’s okay. But really, the central premise doesn’t make a lick of sense: miniature dinosaurs. I mean, come on.

It looks like Charlie Band wanted a dinosaur movie, David Allen could supply the effects - excellent rod puppets and a small amount of stop-motion - but only on a small scale. So either the dinosaurs would need green-screening into every scene, or - hey, what if the dinosaurs in the story were only as big as Dave’s puppets? Thus was born a three-film franchise. Who would have thought it?

In actual fact, that’s not how this came about, but it sure looks that way to those of us with a cynical turn of brain. 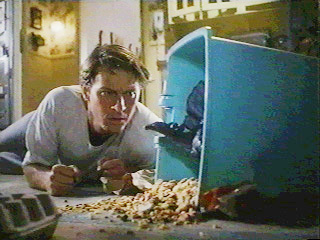 Brett Cullen (CAPCOM in Apollo 13, an astronaut in From the Earth to the Moon, the Governor of West Virginia in The West Wing) stars as Frank Taylor, the obligatory single parent, who is raising teenage daughter Monica (Samantha Mills: Beanpole) and 12-or-so son Jerry (Austin O’Brien, inbetween roles in The Lawnmower Man and The Last Action Hero) on a farm where he has a sideline in finding fossils and selling them to the local museum. This is run by slimy, overweight Rico Sarno (Stephen Lee: Dolls, The Pit and the Pendulum, RoboCop II, Ghoulies III, Black Scorpion and Carnosaur III; he also played the Big Bopper in La Bamba) and has two employees, sexy Vicki (Colleen Morris, who was in episodes of Cheers and Baywatch) and old janitor Whitey (Tom Williams, who did some voices for Batman: The Animated Series and the old Planet of the Apes cartoon). Outside views of the museum show a large building with steps and columns, but our only interior view looks more like a junk shop to be honest. Quite why this establishment would buy common fossils from Taylor isn’t clear, but that whole side of things exists only to get the Taylor family into the shop/museum in order for a mix-up of picnic coolers, after which it is entirely forgotten.

Sarno’s cooler contains five odd-looking, sacred, ancient eggs which we saw him steal from a South American temple in a prologue, despite the dire warnings of local guide Jefe (Peter Mark Vasquez: Robot Wars, Sleepstalker). The Taylors’ cooler has the remains of their lunch so it’s a mystery why they don’t just leave it in their pick-up truck. The family labrador Ruby (played by two dogs) is responsible for grabbing the wrong cooler. She manages to open it and remove the eggs, which she swiftly incubates. The implication is that she views the hatchlings as substitutes for her own recent litter of five puppies which Taylor had to give away, much to his children’s annoyance, because he couldn’t afford to keep them. 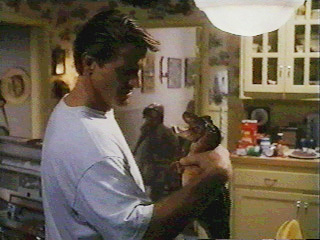 Sarno wants his cooler back but Taylor sends him packing, unaware of the contents. Jerry is the first to discover the mini-dinosaurs, then he shows them to his sister after she discovers what she thinks is a bat but is actually a pteranodon. Jerry is a big fan of Elvis (though there’s little evidence of this and of course no Elvis on the soundtrack) so he christens the tiny T rex ‘Elvis’ and frequently refers to him as “the new King.” Monica, whose tastes in music are more up-to-date, decides that the pteranodon’s name is Madonna. There is also a brachiosaur, a stegosaurus and a triceratops.

Sarno’s increasingly desperate attempts to retrieve his ‘sugarbabies’ - which he of course plans to exhibit to make himself rich - lead to an altercation with Vicki who has the mutual hots for Taylor and ultimately to the abduction of the four non-flying dinosaurs, along with Vicki herself and Ruby the dog. He is assisted in this by a Latino henchman double act: Louis (Tony Longo: Splash, Suburban Commando, The Flintstones in Leaving Rock Vegas) and Ritchie (Stuart Fratkin: Teen Wolf Too, Dr Alien, I’m Dangerous Tonight). It looks for a while like Vicki has fallen in with Sarno as he prepares to unveil the dinos to the media on the museum steps, but of course in fact she has been tricking him and all works out okay in the end.

If you examine the story of Prehysteria, it’s absolute tosh with no serious attempt (how could there be?) to explain the microdinos - either why they exist at that size or why their eggs were still hatchable after being stored for thousand of years in a freezing cold temple, or indeed where they came from in the first place. And the story feels very, very rushed towards the end, with great leaps in the story. Whitey has very little to actually do and Monica’s jeep-driving teenage stoner boyfriend ‘Braindead Danny’ (Gill Gayle: Death Tunnel) has nothing to do at all. The film runs about 80 minutes, including a fairly lengthy title sequence of stone carvings and a very long (but not painfully slow) end credit crawl. It certainly looks like scenes in the script were dropped for time. 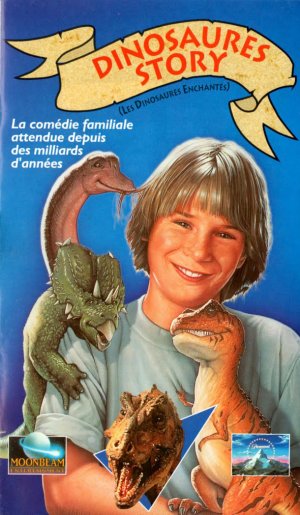 What saves the film is David Allen’s superb dinosaurs. There’s real character there and an extraordinary range of movement, especially from Elvis, all achieved by having one leg or the tail extend off-screen or bolting the dino by one immovable leg to a raised surface. Great puppeteering adds to the realism, with the only example of repetitive movements being a sequence when Jerry puts an Elvis tape on and the dinosaurs all dance to it.

The acting is decent throughout with the expected broad pantomime villain and his stooges. Cullen and Morris make a personable couple, Mills and O’Brien make believable siblings - squabbling yet supportive - and the stuff about their late mother isn’t laid on with a trowel.

Writers Mark Goldstein and Greg Suddeth also wrote Pet Shop and both Oblivion films for Band, who shares directorial credit on this with his father. The original story is credited to Pete Von Sholly whose IMDB entry gives the impression that he is primarily a storyboard artist by trade, having worked on the likes of A Nightmare on Elm Street III and IV, The Shawshank Redemption, Heathers, Darkman, the remake of The Blob, Puppet Master II and III, Bride of Re-Animator, Demonic Toys, Dollman vs Demonic Toys, Return of the Living Dead Part III, Freaked, Roger Corman’s legendary Fantastic Four movie, Bride and Seed of Chucky and Mars Attacks.

Von Sholly has also worked in animation, comics and children’s books and even recorded an album with fellow dinosaur enthusiast Donald F Glut. According to his website, Prehysteria was based on his childhood dream of having little dinosaurs as pets. He directed second unit on the film, as well as co-producing and, of course, drawing storyboards. He also worked on Pet Shop and both Prehysteria sequels. His wife Andrea designed and sculpted the five mini-dinos.

Cinematographer Adolfo Bartolli was a regular on Full Moon pictures from The Pit and the Pendulum to The Exotic Time Machine II, taking in Leapin’ Leprechauns!, Fowl Play, Trancers II-V, Puppet Master II-V and even a few non-Band films such as Octopus. Production designer Milo was another Full Moon regular throughout the 1990s and also worked on House IV. Costume designer Mark Bridges went on to work on such major films as Boogie Nights, 8 Mile and the remake of The Italian Job. 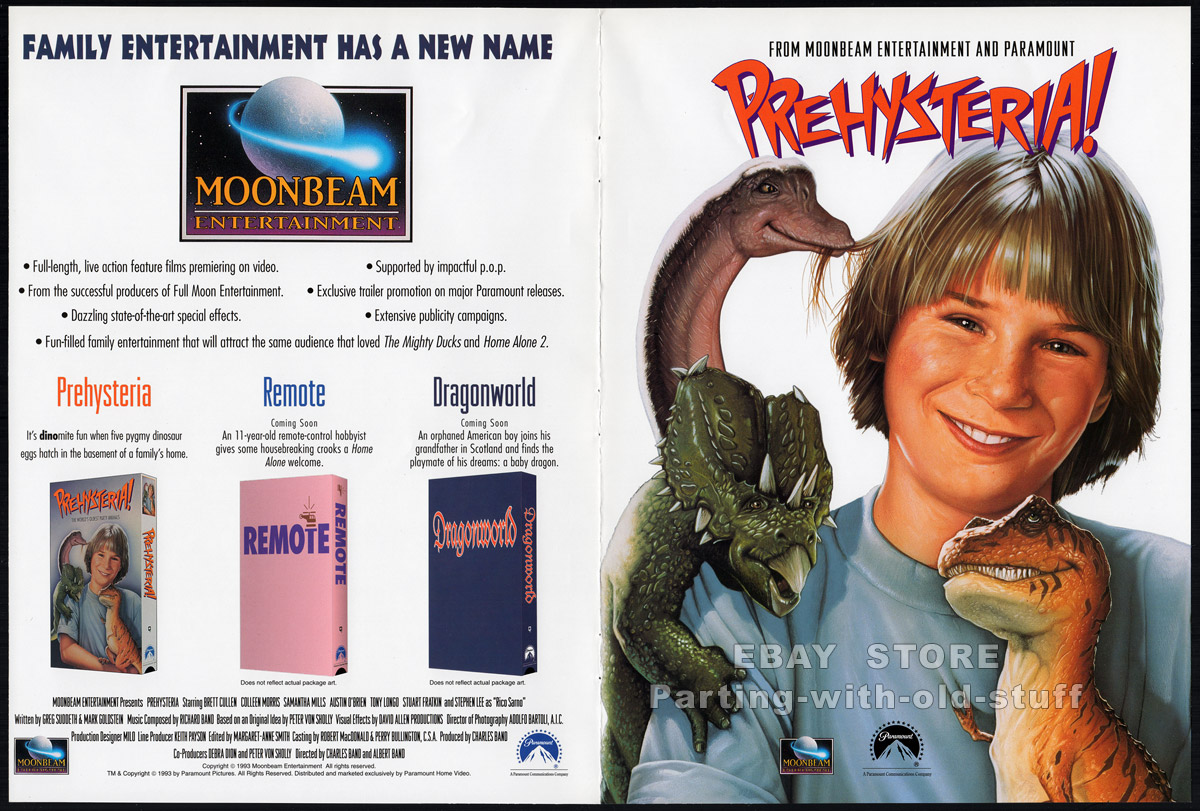 This film (which was called Prehysteria! in the USA but lost its exclamation mark when released in Britain) was the first release from Moonbeam, a ‘family films’ division of Full Moon which also produced Beanstalk, Magic Island, the six Josh Kirby features, Dragonworld and a few other films. It sold 70,000 copies, making it the bestselling DTV title ever (or at least, up to that point). This Paramount UK video includes the trailer for Prehysteria 2 but not one for Prehysteria 3 (which I reviewed years ago for SFX when it was released as a rental tape). None of the three films are connected in any way except through the dinosaurs.

TF Simpson (two and three quarters) enjoyed watching “the baby dinosaurs film” so for pleasing its target audience I’ll give it a...