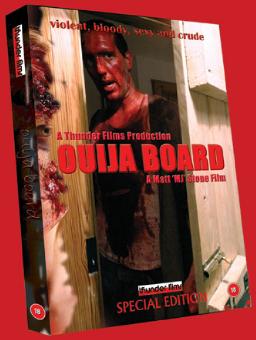 The title is enough to make your heart sink. Ouija boards are the hoariest cliché in horror movies. On the other hand, any film by someone called ‘MJ’ has to be good. As it turns out, Ouija Board is actually very good indeed, a terrific addition to the apparently never-ending British Horror Revival which has been going on for a decade and shows no signs of stopping.

The set-up is utterly formulaic: five young people celebrating the end of university by heading off to stay for a few days in a remote cottage in the Scottish countryside. Paul (Nick Smithers: Evil Aliens) and Kerry (Georgia Goodrick: Mind the Gap, Mess) are the couple whose idea this was. Paul would have preferred just the two of them but Kerry insisted on bringing along Simon (Lee O’Driscoll: Crooked Features) and Lucy (Australian-born Candice Edmunds) plus singleton James (Ross Maxwell: Sessions of the Mind, Hacked Off) - the only character with a Scottish accent.

What impressed me most about Ouija Board was the characters. These are marvellously written, finely acted portrayals of real people. Often with these things it is possible to delineate the participants by simple attributes. One could do that here: Kerry has straight, brown hair; Lucy’s is curly and blonde; Paul is tall, James is Scottish and Simon is the other one. But to pursue this option would be to do the film a great injustice because these characters are not defined by anything as simplistic as hair, height or accent. Rather, they are defined by - and this actually taught me something which I can use in my own scripts - their relationships to each other.

That’s what makes a character: the way that they interact with the other characters and the way that these relationships change over time. Amorous, amiable or antagonistic, these relationships are all real, all factorial four of them (okay: 24). And there is certainly antagonism here, which is good: conflict is what creates drama. But you need these clearly defined yet thoroughly rounded characters to generate believable conflict.

Their problems start on the journey to the cottage when Paul, driving along endless identical country lanes, momentarily falls asleep at the wheel and mows down a young woman standing in the middle of the road. Recriminations fly about whose fault it is and what to do with the body. They can’t leave it so the suitcases are shifted onto the backseat and the girl’s body is shoved in the boot.

Sometime later, still unable to find the cottage, the quintet stop for the night and simply crash out in or near the car. But when they awake - the girl’s body has disappeared. More recriminations, more conflict, more characterisation.

They make it to the cottage. I’ve never understood the desire of people in horror films to go and stay in nicely decorated, all-mod-cons cottages in the dim and distant middle of nowhere. If you want to get away form it all, pitch a tent. You’re mad, but pitch a tent. If you want hot and cold running water and a comfy bed and a fridge - well, that’s why God gave us hotels. The whole getting-away-from-it-all thing, it’s beyond me. Anyway...

At the cottage, people start seeing the girl who was hit on the road. Individually, they just see her briefly but unequivocally - and with increasing corporeality. By now we’re into an effective ghost story. Who is this young woman? What does she want? Why has she targeted this group of young people? Does somebody know more than he or she is saying?

And thus we come eventually to the titular ouija board and it must be said that this is one of the better ouija board scenes that I have seen. It’s done for a valid reason - there is already unambiguous evidence of a ghost, and a dangerous one at that. Furthermore, some of the answers given by the spirit are surprising and disturbing, a real breath of fresh air in a trope which is stale and clichéed. The tension mounts, the conflict rises, character relationships change, it’s all top stuff. I don’t want to go into details - watch it.

Towards the end, when things actually start getting nasty, the film stumbles a little as its very limited budget starts to show. There’s a knife attack which doesn’t look anywhere near as harmful as the dialogue subsequently indicates it is, and a car injury likewise looks like something that might cause mild bruising. Another mis-step is a sequence in which Lucy leaves the cottage and encounters a farmer (Doug McFarlane). It is entirely unclear what happens there or why and it smacks of a scene that was meant to be much more and has been truncated because of the constraints of time and/or money.

But these things don’t distract from the film as a whole which is a storming horror picture with genuine chills and frights and a generally cohesive and original plot. And the reason why these chills and frights seem genuine? I already told you: it’s the characters. Every one of the cast turns in a note-perfect performance of a character who is clearly already alive on the page and then fleshed out further on screen. Not only that, but the casting is as spot-on as the cast, with each actor perfectly suited physically to their role even before they do or say anything.

I really enjoyed Ouija Board. It’s a joy to watch an effective, dramatic, unashamed horror film like this. Which is why I find the film’s packaging both puzzling and disappointing. Here’s the blurb from both the website and the sleeve of the self-released DVD:

Escaping to the Scottish countryside for a weekend of sex and drugs seemed a good idea to Kerry and her new boyfriend Paul. Lucy, Simon and James want to get in on the fun so they all head off to Paul’s remote country hideaway. When a tragic accident leaves a girl dead, the friends, after a nights drinking, decide to play the ouija board. A terrifying decision they may not live to regret.

‘A weekend of sex and drugs’? There is no suggestion of drug-taking and almost no sex. (Both actresses gamely disrobe but only very briefly and for reasons of narrative, not exploitation.) The front of the DVD sleeve proclaims: ‘violent, bloody, sexy and crude’ - yet the film is none of these things. There is a certain amount of blood in the final act - you can see that on the sleeve image which, incidentally, is something of a spoiler - but I would never describe this as a bloody film. Or a violent one. As for sexy, if a two-second flash of tits gets you hot then you need to start worrying. And crude? I don’t know what to say to that.

Assuming that Matt Stone was responsible for his own publicity, I can’t understand why he would drastically undersell his own very effective film like this. There are lots of horror movies out there which are indeed violent, bloody, sexy and crude - and they usually have a fifth adjective applied to them by audiences: crap.

This sleeve copy, together with the completely inaccurate ‘weekend of sex and drugs’ blurb, gives the impression that this is a sleazy, gory, over-the-top splatter-fest instead of the thoughtful, emotional, gripping supernatural drama that is actually on the disc. I could understand this misleading packaging if the film had a distributor who decided that it would sell better if people thought it was full of boobs’n’blood, but Matt Stone is selling his own DVD through his own website. It’s like he hasn’t seen his own film. 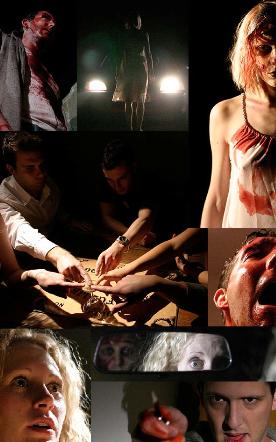 I mean, I could understand somebody misrepresenting a film to make it seem better than it really is, but this packaging and blurb makes an excellent film look like a piece of trash. It’s just wrong. I can’t explain it.

Homegrown horror star Marysia Kay does a very effective silent, spooky routine as the ghost. Tyler-Wayne Thompson (Pini Banini’s Razor) provided the effective special effects make-up while the score was by Alex Zaven Taylor. Matt Stone (who presumably added the ‘MJ’ to distinguish himself from the co-creator of South Park) handled his own cinematography and editing. I saw an online review of Ouija Board which complained about the awful sound mix but that guy must have received a bad DVD because the sound was fine on my screener. And regular readers will know that bad sound on indie films is a real bugbear of mine.

Pay no heed to the packaging: Ouija Board is a smart, effective, spooky horror film.