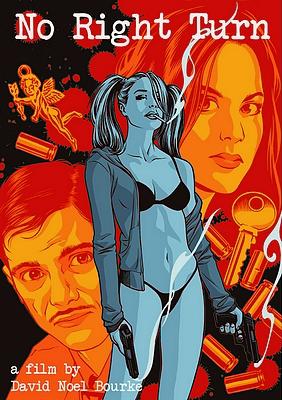 I like it when I come to a movie completely fresh with no expectations, no advance knowledge. I may well have watched the trailer for David Noel Bourke’s No Right Turn ages ago but it took me so long to get this screener to the top of my TBW pile that, by the time I popped it into the DVD player, I couldn’t recall a damn thing about it.

There was no sleeve with this disc, just a post-it from David (who, by a startling coincidence, e-mailed me the following day to ask if I had watched his film yet). I recall that David’s first feature Last Exit was very well made but rather unpleasant: one of those films that you’re glad you watched but don’t really want to watch again.

No Right Turn (why does he title all his films after road signs?) proves to be even better and, crucially, very enjoyable to watch. It’s a slightly stylised thriller with an occasional dab of black humour. Like Last Exit, it’s set in a Danish underworld of drugs, sex and crime but the characters here are either likeable or interesting, sometimes both. And in slightly overenthusiastic accordance with EU regulations which state that all Danish films must feature either Mads Koudal or Kim Sønderholm, both gentlemen have small roles here.

How odd is that? I’ve never been to Denmark and the number of Danish films I’ve ever seen could probably be counted on the fingers of one hand, yet I know three people involved in the Danish film industry. 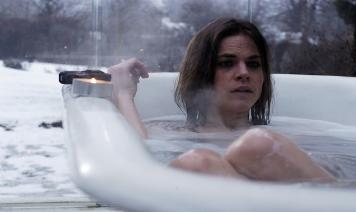 No Right Turn has one of the greatest opening images I have ever seen. A young woman reclines in a steaming bath. Candles light the room and rose petals are scattered across the floor. Slowly sing ‘Happy Birthday to Me’ she raises a revolver to her head and plays Russian roulette with herself. We don’t know who she is, where she is or why she’s doing what she’s doing but we cannot switch off the DVD or change channels at this point. This is an enigma that we must resolve, even if it takes 90 minutes.

Actually, I don’t think we ever do resolve this enigma. The bath scene reappears near the end but I didn’t understand the film’s ending. So I don’t know: maybe it is explained but I just didn’t get it. Doesn’t matter - it’s an amazingly effective hook.

The film proper introduces us to Nina (Laura Bach - not the American actress of that name who was in Zombie Strippers) and Johnny (Tao Hildebrand: Postkort till Grand Prix). Johnny is a small-time crook who makes a living by delivering cocaine under the cover of delivering pizzas; customers actually do receive a pizza but it’s the contents of the little plastic packet on top that they’re paid for. From this work, Johnny is saving up enough money to eventually buy his own illicit establishment.

Ironically, Johnny has no idea that his wife Nina is a whore who spends her days, while he’s out delivering, screwing a succession of men. One of these is Teddy (Lars Lippert) although there’s a two-way emotional attachment there which makes him more than just a client. Sporting a pencil moustache, Teddy is a successful playwright whose hobby is collecting and restoring steam locomotives. His office is a converted railway wagon and is, again with the irony, a regular stop on Johnny’s delivery round. 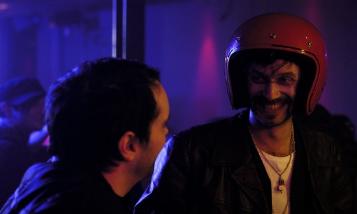 I did wonder, as Johnny cheerfully whizzes round the city (I’m assuming it’s Copenhagen though it’s never named) on his moped whether his ever-present red helmet was some sort of symbolism because he’s, well, frankly he’s a knob. But I may be reading to much into this.

Nevertheless, Johnny is a bit of a prat, a petty criminal who is coked up most of the day and whose most notable achievement is his hot wife, of whom he is justly proud but oblivious to her other life.

One night, Nina gets fed up with Johnny in a bar where he has been haranguing a couple of blokes who took his wife’s picture (Mads Koudal: Footsteps, The Feral Generation, Merantau Warrior, plus Morten Steensgaard). She sets off home alone but is followed by the two men who attack and rape her in an alleyway. However, she is saved by the intervention of Monella (Sira Stampe), a slightly loopy artist who was the girl in the bath.

Over the ensuing weeks, Monella and Nina become good friends, a friendship which eventually transforms into a lesbian affair. They hang out in bars, rebuffing the advances of ‘sleazy bar guys’ (played by Kim Sønderholm: Craig, Deadly Pursuit, and Michael Rene Jensen: Craig, Pistoleros) and eventually a plan develops. Monella will ‘kidnap’ Nina and demand that Johnny hand over the key to the locker where he keeps his cash, then the two women will leave town together: it’s a sort of Thelma and Louise meets Ruthless People scheme. 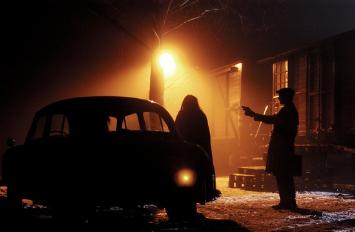 This actual ‘thriller’ plot comes surprisingly late in the day but it doesn’t matter because the characters are so fascinating, so believable - and the world they inhabit so intriguing and so well-drawn - that we really don’t mind just tagging along with the film to see where it takes us. Because we can be sure it will take us somewhere worth going.

After sitting through so many films set in a criminal underworld where unpleasant people do cruel things to each other with scowls on their faces (and knowing that there are more such films in my teetering TBW pile) it makes a wonderful change to find a film where the characters, though they’re not exactly upright citizens, at least seem to have real lives. If I’m going to spend 91 minutes of my life watching fictional characters, they should at least be characters that someone might want to spend time with.

A clever, tightly honed script combines with assured direction and a central quartet of excellent performances (plus some fine background roles) to make No Right Turn a real joy to watch. Lars Lippert in particular looks to be having a whale of a time as Teddy, playing him as Michael Palin would have played the character if this film had been made in the UK in the 1970s. 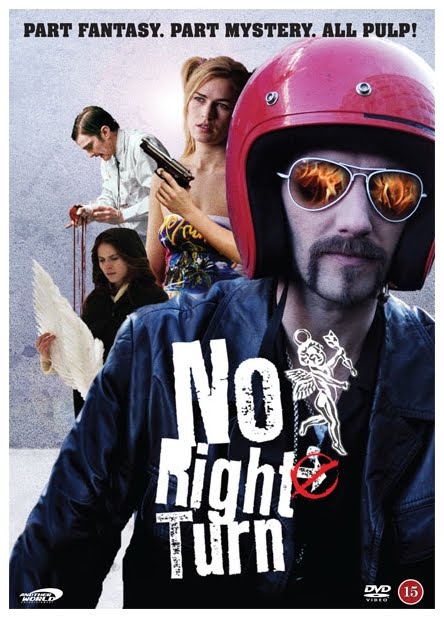 The only downside is some occasional fantasy/dream elements, including the aforementioned ending, which are simply too obtuse for me. There’s a scene of Monella in the snow finding a pair of angel wings: very poetic, but what does it mean? Flora Nasseri Jensen is credited as ‘angel/little girl’ and other cast members include Sami Darr (who was in Danish horror anthology Speak of the Devil) as Johnny’s supplier, Danish-Japanese actor David Sakurai and Gauthier Bricmont as the barman.

Excellent cinematography by Eric Witzgall (Himmerland) gives No Right Turn the feel of a classic film noir without compromising an evocative colour palette, while Bourke handled his own editing. The brilliantly named Dorthe Bitsch was responsible for the make-up, Liselotte Justesen (Himmerland) was production designer and Jacob Moth (Last Exit) provided the music.

No Right Turn gripped me from beginning to end and comes thoroughly recommended.