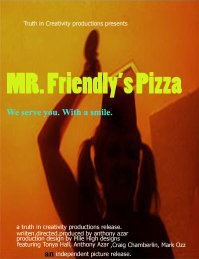 The last short that Anthony P Azar sent me, Happy Hour: The Movie, was a modest, conventional, rather overlong piece about a bar where the clientele get lucky one by one, with a vampiric twist that could be seen coming a mile off. He also sent me a disc of this film but it wouldn’t play so it was some time later that I got the chance to watch Mr Friendly’s Pizza, expecting more of the same.

What I found instead was a film that is surreal to the point of being avant-garde. In fact the adjective that popped into my head was Bunuel-ian. This is a Bunuel-ian film about pizza. It’s sort of a horror film too, I guess, because people sort of get killed and there’s sort of blood.

I don’t know where to start reviewing this as there’s no real narrative. There are characters and there are locations so I suppose I can review those. 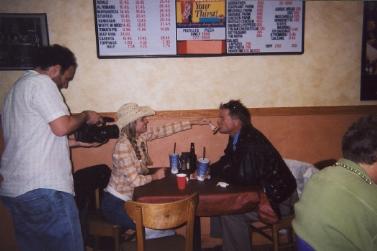 Azar stars as a ‘scumbag film producer’ who orders a pizza to his office. Tonya Hall, the barmaid from Happy Hour, is the delivery girl with her hair in bunches. The film producer imagines a murderous arm emerging from the pizza box (quite a nice and imaginative effect) then wakes up but imagines the delivery girl killing him with a pizza cutter (another quite nice and imaginative effect). Intercut with all this are shots of the ‘Mr Friendly’s Pizza’ restaurant where the clientele include a white rasta and a guy in a leather jacket who complains about his pizza and insists on another one. The film finishes with the delivery girl murdering that guy in his bath. (He is credited as ‘The Jerk’ and is played by Craig Chamberlin; Crystal Louthan, the hot blonde babe from Happy Hour, is his stetson-wearing girlfriend.)

That’s about the closest the film gets to a story. Apart from some one-sided phone conversations that Azar has at the start, Hall’s repeated, cheery “Mr Friendly’s Pizza!” and the leather-jacket-guy’s food complaint, there’s no dialogue.

The colour balance is all over the place, to the extent that there’s a shot where Azar leans forward and in doing so changes the colour of the wall behind him! But when the film is so avant-garde in its construction and presentation, is that incompetence or deliberate artistic style (or indeed, accidental artistic style)? There’s no way to tell. Looking at the Truth in Creativity website you could be forgiven for expecting MFP to be a trashy horror film set around a pizza parlour but if that’s what you think you’ll see then you’re going to be disappointed and very confused. There are lots of shots of people in the restaurant, including the kitchen staff, but none of them seem to do or mean anything. What is going on?

Azar is not quite a one-man band but most of the credits here are him under various names. I just can’t work out how one guy can produce something as straightforward (to the point of obvious) as Happy Hour and something as daringly experimental as this. I haven’t been this stumped by a film since I watched Frankensteins Bloody Nightmare but I’m going to have to give this a reasonably good grade for two reasons. Firstly, there is the same use of imaginative shots and angles that I saw in Happy Hour, and secondly I just can’t believe that anyone would make anything like this by accident.

Azar is still finishing off his debut feature, The Cops Did It. I can’t wait to see what that’s like...

Email ThisBlogThis!Share to TwitterShare to FacebookShare to Pinterest
Labels: 2008, USA