In December 1995, the Science Museum in London had an exhibition of material relating to Arthur C Clarke, to celebrate the 50th anniversary of his groundbreaking magazine article on the possibilities of geostationary communications satellites. Although Clarke himself remained in Sri Lanka, I was able to grab a few words with his old friend Sir Patrick Moore. Just over eleven years later, as Sir Patrick prepared to introduced the 650th(!) edition of The Sky at Night, I thought this was worth digging out and posting on-line, even if it hasn’t really got anything to do with cult movies. 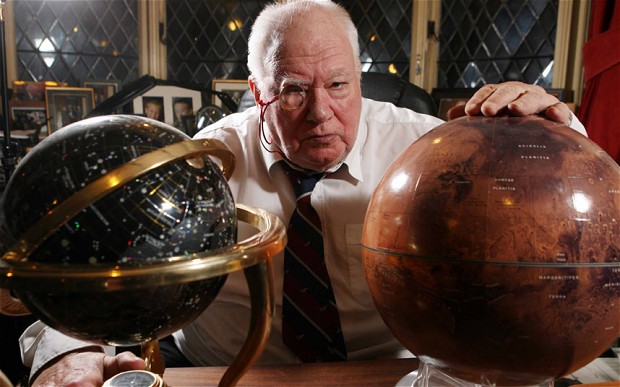 What sort of things did you get up to as boys? Building small rockets and things?
"No. Arthur was doing that kind of thing, but I wasn't. I'm not very good with my hands anyway. I'm not a spaceman. My interest is in pure astronomy and my own particular subject, which is the Moon. So while he was busy building things and planning things, I was observing them with my telescopes."

Do you remember when the communications satellite piece was first published? Was it recognised as groundbreaking immediately?
"It didn't cause much interest at the time, I don't think. It was regarded as too way out and into the future, which of course it was. Don't forget that way back in 1945 there were still many people who believed that space travel would never come, and they believed that right up until 1957, I think!" 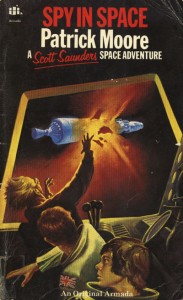 As an astronomer, what sort of connections do you see between Arthur's science fiction and the reality of space exploration?
"Don't forget, Arthur is a scientist as well as being a science fiction writer. Therefore in his writing, when he wants to stick to sober science he can and does. Obviously he can go over the top when he wants to with the full knowledge of what he is doing. Many of his predictions have come true; others will come true in the future; others, undoubtedly, won't. You can't be right all the time. But he's been right much more than he's been wrong."

You used to write science fiction yourself, didn't you?
"I never wrote any seriously. I wrote some boys' novels once. But I have not had time to do it for the last ten years or so. I always meant to write another one, but I haven't got round to it. There's no time to do it unfortunately."

Are you pleased with the exhibition here at the Science Museum?
"I think it's very good. They've got it right, I think. I'm glad to see Arthur's typewriter there - rather younger than the typewriter I use all the time. I use a 1908 Woodstock and that one's rather later than that."

Do you try to keep up with technology, or are you happy with your old typewriters?
"I do all my writing on my ancient typewriter. I can type very quickly on that one; on modern things I can't. Don't forget, my role in astronomy is I'm an observer of the Moon and planets. I'm not really a spaceman. I know very little about the technology of rockets, but about the surface of the Moon I do know." 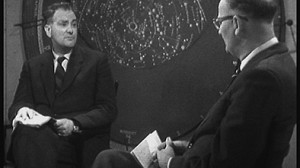 Do you think space exploration is due for a renaissance?
"Not really, the reason why it appears to have slowed down is because the Americans put all their cosmic eggs into one basket - the Space Shuttle. That cost a lot more, took a lot longer, and had that awful tragedy too. It gives the impression of having slowed down, but when all these troubles have been overcome I think we'll be back on course. I don't think Arthur or I will see it. We may see a major space station; that'll start next year I think. Whether we'll see the first men on Mars, I don't know. We probably won't, but your children will, and your grandchildren certainly will.”