Jon Niccum wrote the excellent noir fantasy short Time’s Up, Eve and also contributed to the screenplay for Steve Balderson’s Stuck!. He kindly answered a few questions by e-mail in March 2011. 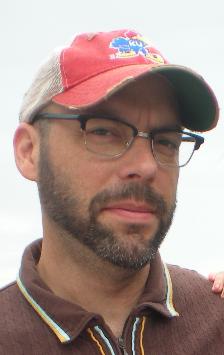 How did you first hook up with Steve Balderson?
“In my former day job as Entertainment Editor of the daily paper here in Lawrence, Kansas, I originally wrote an interview feature about Steve's Firecracker. We started corresponding quite a bit after that.

“At some point he saw a film I had written called Merriman's Circle, which is about an elderly woman who believes she's being terrorised by a car that keeps appearing on her cul-de-sac. He then invited me to be the third writer on Stuck! But before that film got made, he got the funding to make Watch Out, and he asked me to play the fanatical father of the lead character (Matt Riddlehoover). That ended up being a really fun shoot, and I got to take part in some very memorable scenes. Even though I'm primarily a writer/producer, I actually got recruited for some cool acting gigs after that.”

You are credited with ‘contributions’ to the script of Stuck! - what did you contribute?
“Steve believed the original script (the debut by Frankie Krainz) was too long and read too much like a stage play. I cut out at least 30 minutes. And I massively rewrote the opening scene - and much of the interaction throughout between Daisy (Starina Johnson) and her mother. The rest was just tightening, clarifying plot points and adding little details in the dialogue. I feel proud of what I contributed, but I still think of it as Krainz's project.”

You and Patrick Rea have collaborated on several short films: how do you think the two of you have progressed over the course of your work together?
“We've made five short films together - two of which we co-wrote. We also have written two features together that will eventually be made by us or someone else. I think we've progressed in the sense that each movie we've made has been radically different from the previous one.

"Zero the Counter was a psychological thriller inspired by the premise of what might have happened if serial killer Ted Bundy had picked up fellow serial killer Aileen Wuornos. It was shot entirely outdoors as a road movie. Next was the more intimate, interior think-piece Merriman's Circle. Then we followed that up with the dark, dark comedy Paint Shaker which is about a workplace shooting in a hardware store. That was co-written with Jai Nitz, who's a well-respected comic book writer and a Bram Stoker Award winner. We then did a light supernatural comedy called Misfortune Smiles which has a hilarious lead performance by Jeff East of Superman fame as a charlatan fortune teller whose crystal ball actually starts working. The most recent is Time's Up, Eve which is an odd hybrid of neo noir and Val Lewton-style horror.”

What was the initial idea behind Time’s Up, Eve and how well do you think the film achieved this?
“Patrick had the premise and first draft - complete with a soul-stealing menace pursuing a woman around an abandoned city. It was called Time's Up, Will and was to be shot in black and white. But it was set in a post-apocalyptic future. Once we started collaborating, Patrick suggested we change the lead character to a woman, and I suggested we actually set the film in the 1940s.

“Of course, the ‘40s twist added all kinds of challenges. But I think the visual look and feel of the project is astounding. A big part of that is due to the cinematography of Hanuman Brown-Eagle, who approached each shot as if it were a painting. Structurally, I feel the piece works quite effectively. I've had a number of critics mention the movie creates the type of complex atmosphere that you normally only find in a feature, but it does so in an economical 11 minutes.”

What has the reaction to Time’s Up, Eve been like?
“Of all the projects I've been involved with, it's the most universally liked - despite the fact it’s arguably the oddest one we’ve done. It seems every week we've got it playing in another film festival. So far it's been winning some kind of award every time it screens.” 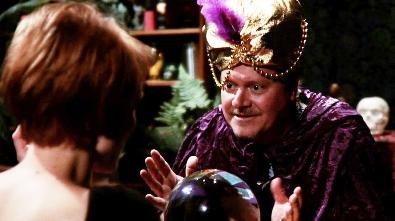 What’s next for you?
“We are rolling cameras on 21 April 21 2011 on Rhino. Patrick is directing a pilot-length script co-written by myself and Jai Nitz. It's a crime drama about a former professional football player (American football, not soccer) who's become a college-town drug kingpin. He takes in a protégé, but eventually the relationship becomes volatile and deadly. The film stars Malcolm Goodwin, who has been in films such as American Gangster and who is starring in the new TV series Breakout Kings, and Keith Loneker, who is in movies such as Lakeview Terrace, Out of Sight and Leatherheads. We've been working on this project for more than two years, and I can't believe it is mere weeks away.

“Aside from that, Patrick and I wrote a sci-fi thriller called The Mirror Watcher that ideally we hope to start shooting in the fall of 2012. I've learned some lessons from both Patrick and Steve Balderson that you actively have to be working on at least two projects ahead. That's how filmmakers like them can consistently be delivering the goods.”
Posted by MJ Simpson at 17:11