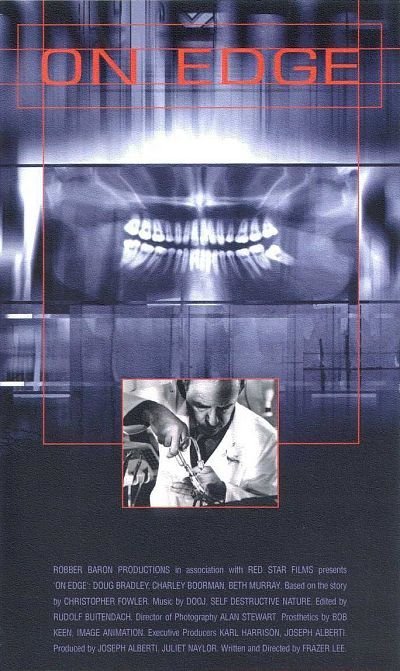 Frazer Lee’s critically acclaimed and justifiably award-winning short On Edge is satisfying in three ‘at last!’ ways. Firstly, it’s based on a short story by Christopher Fowler. Chris has been one of my favourite writers for years, and is also a leading figure in the British film industry. His publicity company created the advertising campaigns for Reservoir Dogs and Pulp Fiction, among others.

But attempts to film Chris’ own stories have generally come to naught. Roofworld has been in development for years now, while his Faustian tale Spanky came this close to being shot by Guillermo del Toro (as Mephisto’s Bridge) before conflicting schedules (or something) caused it to fall apart. On Edge is an example of how well Chris Fowler’s ideas and characters can translate to the screen.

It’s also a comparatively rare chance for Doug Bradley, a sorely underused actor, to actually perform without layers of pin-studded latex over his face. He gets to play a real character here and it shows what a waste it is that he is still making Hellraiser Part XXIV several films beyond the point when everyone stopped watching them. Finally, it’s a great example of dental horror, a surprisingly underused subgenre that is otherwise pretty much limited to The Dentist, the two versions of Little Shop of Horrors and, um, The Dentist 2.

The story is simplicity itself, as it needs to be in a film running only ten minutes or so. Charley Boorman (more recently in The Bunker, written by Clive Dawson) is Mr Thurlow, a young chap with a broken tooth, indignant that his regular dentist is on holiday and he will have to see a locum. Bradley is the smooth-talking but creepy chap in the white coat whom Thurlow allows to poke about in his mouth and then put him under. But can you trust a dentist you don’t know? Beth Murray provides sterling support as the receptionist.

Without giving too much away to those who haven’t seen the film, it builds to a horrific climax courtesy of prosthetic effects work by the legendary Bob Keen (Highlander, Hellraiser, Hardware and almost everything else made in the past 20 years).

Another useful addition to the crew is cinematographer Alan Stewart, a BAFTA nominee who has worked on numerous short films, including the Tartan Shorts series, as well as major production like Band of Brothers. Frazer Lee’s direction is remarkably sure and accomplished for a first film, making full use of carefully structured point of view shots that play up the full helpless/willing horror of the dental patient. The film was shot in 35mm widescreen and it really shows; DV is fine and all that, but you cannot beat a strip of celluloid.

But really, and with due acknowledgement to how uncomfortable Charley Boorman must have been, this is Doug Bradley’s film. For the most part it’s a monologue and that’s the one place where it stumbles slightly. Not through any fault of Bradley’s, but with Thurlow unable to speak, his character must answer his own questions and towards the end the script tips over into infodump mode - “Shall I tell you what I’ve done?” - though it’s difficult to see how this could have been avoided. It certainly doesn’t detract from the atmosphere or the tension. 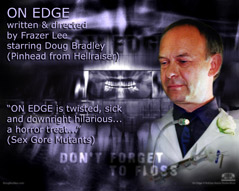 On Edge is now available as a ‘special edition’ VHS which includes an interview with Frazer Lee, originally aired on the Sci-Fi Channel (US) in 2000 as part of a Clive Barker-presented series, plus a few out-takes which allow a slightly closer look at Bob Keen’s creation. Contact Robber Baron Productions directly for details.

Lee and Bradley (and some other On Edge crew) subsequently worked on a second excellent short, Red Lines. Two short films in five years may seem a less than prolific output, but good films are like icebergs - you only see the tip of them. Frazer Lee is hard at work on as-yet-unseen projects, building a career slowly, steadily and sensibly. Catch his early work now while you can.